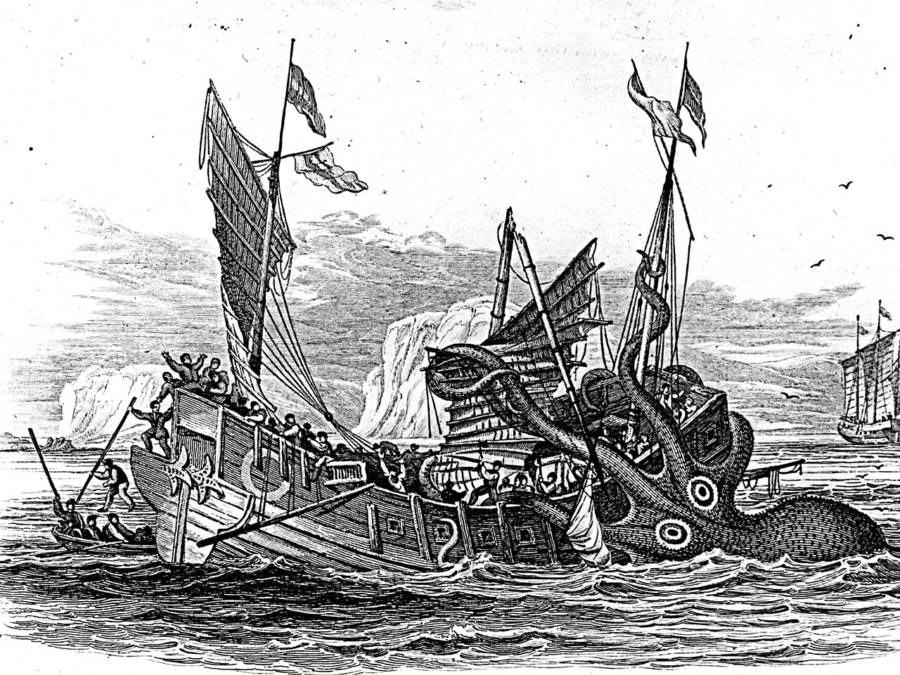 Pierre Denys de Montfort/Wikimedia CommonsA kraken grabs hold of a ship, preparing to pull it under the sea.

In the 18th century, the Norwegian bishop Erik Pontoppidon insisted that the Kraken was no myth. The fisherman of Norway had seen it first-hand countless times, usually on hot, summer days.

“Our fisherman usually affirm that when they row out several miles,” Pontoppidon said, “that the Kraken is at the bottom of the sea.”

At first, there would be a bubbling and scattering of marine life, as if every fish in the sea had suddenly started to flee in a panic. Then a great, black form rose from the depths. Any sailor that wanted to survive would get himself as far away as possible.

When the sailors had fled to a distance they imagined would keep them safe, though, curiosity would get the best of them. Some would look back and watch, and they would see, as Pontoppidon described it:

“They see the monster come to surface. … Its back, which appears to be a mile and a half in circumference, looks, at first, like a number of small islands, surrounded with something which floats like sea-weeds; here and there a larger rising is observed like sandy banks; at last several bright points or horns appear, which grow thicker the higher they rise, and sometimes they stand up as high, and as large, as the masts of middle-sized vessels.” 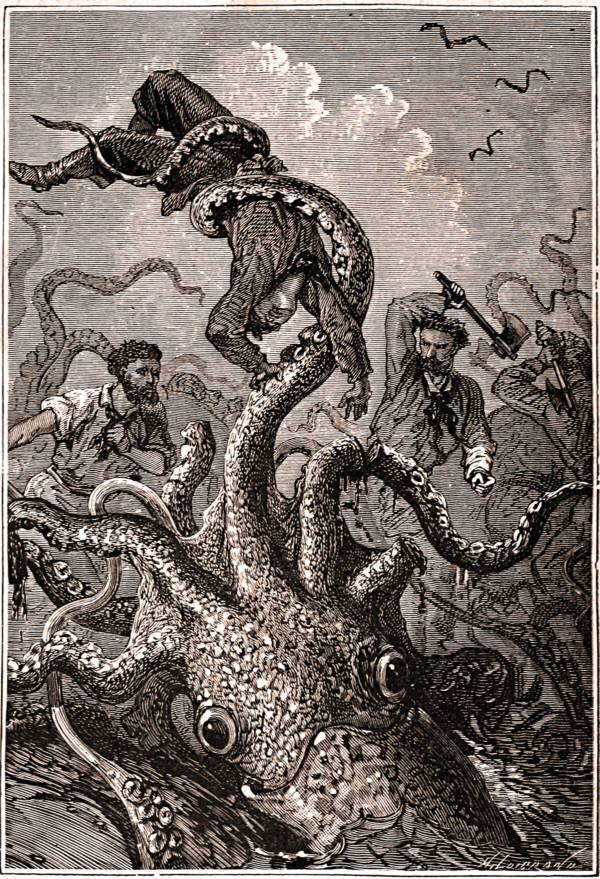 This was the Kraken – the largest and most ferocious creature in the sea. Surfaced, a Kraken would stretch out as far across as ten warships side-by-side. It had great tentacles that could pull a ship and its crew into a watery grave below. And even if it let you be, its massive size would create such a whirlpool when it dove back down below that it could suck a whole fleet underwater.

There is documentation of this horrifying mythological creature haunting the seas since the 13th century. The Viking hero Örvar-Oddr of Iceland, it is said, mistook one for an island and was nearly swallowed whole.

The Kraken ranks among those mythological creatures that have stuck with us and excited our imaginations for centuries. Those fishermen on the coast of Norway, though, might not have been entirely wrong. While there is no creature quite as massive as a real Kraken, scientists have since discovered the giant squid, which can grow up to 600 lbs. This mythological creature may just have been an exaggerated report a real oceanic monster.

Or, who knows — perhaps they really did see it. Perhaps, somewhere under the sea, waiting to be discovered, is an even more enormous squid, big enough to tear a ship to shreds.