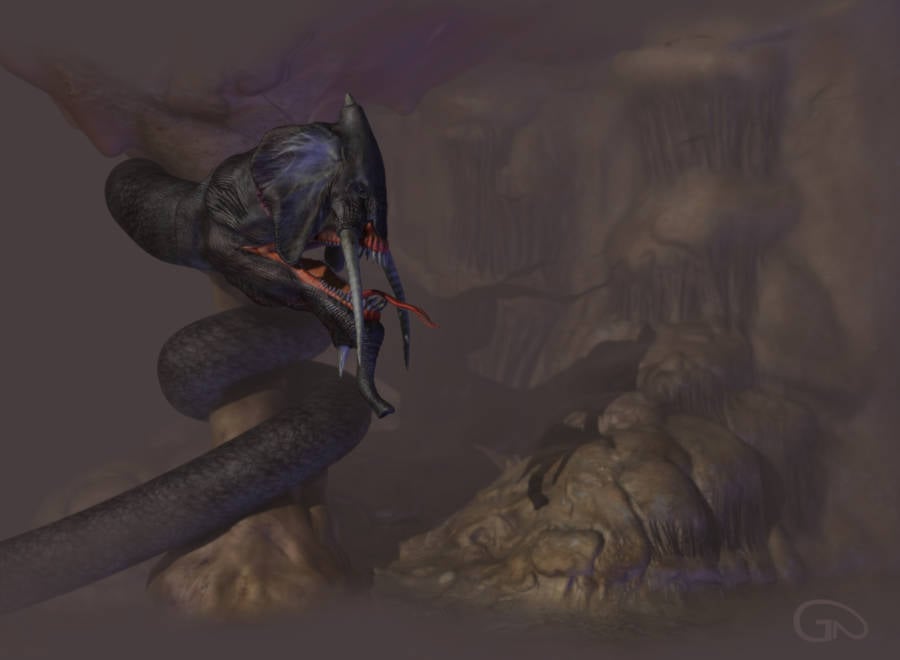 According to an South African legend, the great and terrible Grootslang was one of the first creatures the gods ever made. When man was nothing more than a primordial ooze waiting to be formed, the gods created a massive, powerful serpent, larger than an elephant and smarter than any man.

It was a mistake. The gods were new to the art of creating life and they didn’t yet understand the dangers of making something as powerful as this great snake that could coil its body around any creature and crush the life out of it in seconds.

They tried to correct it. The gods tried to exterminate every Grootslang that lived. They split the powers of the Grootslang and dispersed them across two species: the elephant and the snake. But one Grootslang managed to escape. She became the mother of a whole species of mythological creatures that the gods themselves called a deadly error. 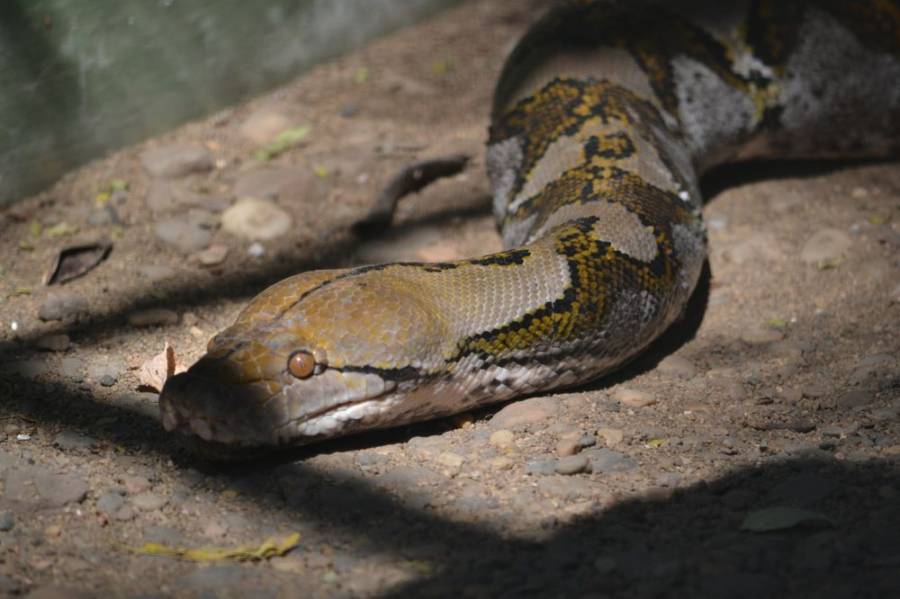 Wikimedia CommonsA reticulated python, one of the largest real-world serpents that still pales in comparison to the supposed size of the Grootslang.

When the first Europeans moved into the Congo, the natives told them that the Groostlang still hid in the recesses of their lands. These mythological creatures lived in bottomless pits and great caves that extended 50 miles across. Most Grootslang clung onto hoards of glittering diamonds and guarded them with greed and envy. Perhaps natives used the myth of the Grootslang to ward off colonizers.

Today, the best-known Grootslang, it’s said, hides in a cave in Richtersveld, South Africa. There it lies in wait for anyone foolish enough to stumble onto its domain and passes the time by luring in elephants, crushing them, and swallowing them whole — making this one of history’s most terrifying mythological creatures. 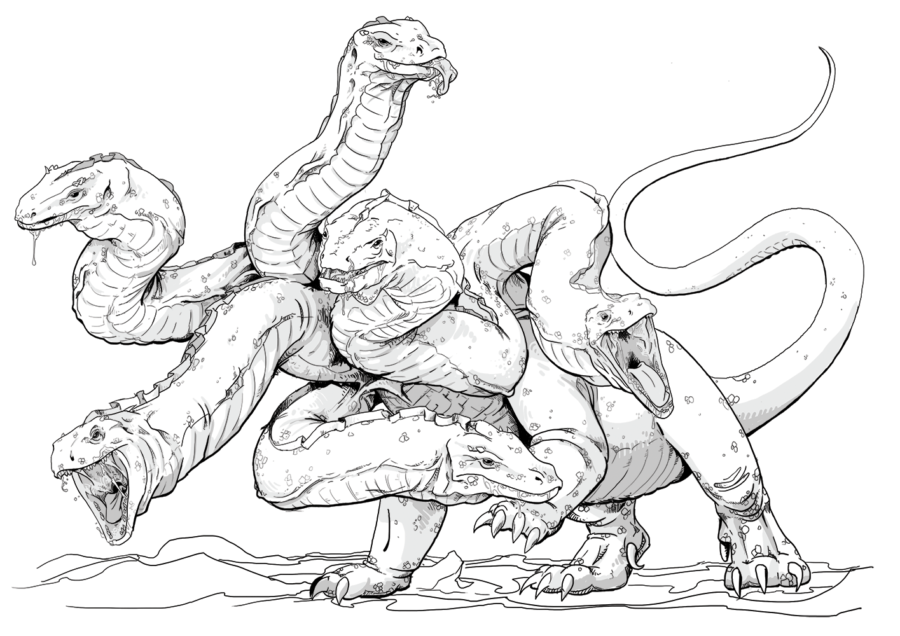 LadyofHats/Wikimedia CommonsA hydra, as drawn for a Dungeon & Dragons bestiary of mythological creatures and monsters.

As horrifying as the many-headed mythological Hydra could be, most would never live long enough to see it. Every drop of blood coursing through its body was filled with so much venom that it breathed poison. A noxious air filled its lair and anyone who inhaled it would fill their lungs with an acid that ate them from the inside out.

Should anyone make it through the deadly air in the lair, they then would find themselves staring into the eyes of an enormous dragon-like creature with nine heads. No matter what anyone did the Hydra could never be killed.

If anyone managed to remove one of this mythological creature’s heads, two more would grow in its place. The only way to prevent the re-growth of a head was to sear it with a flame but even then its final head was completely immortal. The hydra could never die. 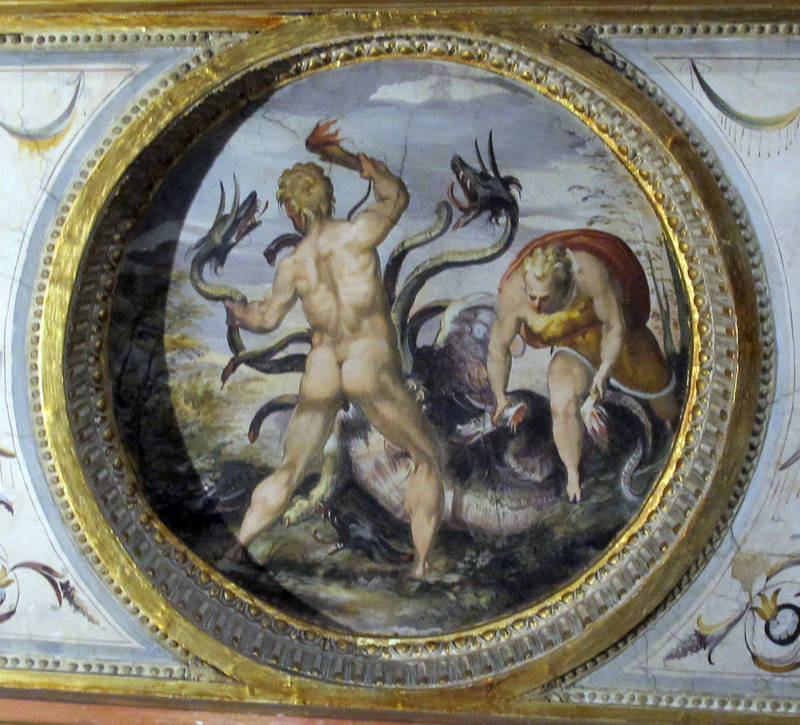 Wikimedia CommonsHeracles and the hydra. 1555.

Its heads were snake-like, so much so that some believed it was a manifestation of early man’s fear of snakes. Some early Roman writers claim that the mythological creature started off as single-headed snake whose body didn’t regrow but evolved into the unkillable beast we know today from the story of Heracles.

Slaughtering the Hydra was the second trial of Heracles. He had his nephew, Iolaus, join him, using a firebrand to cauterize its severed necks and keep them from growing back. When all that was left was its original, immortal head, he used a magical sword gifted to him by the goddess Athena to chop it off.

Even then, though, the head still writhed and shrieked. It refused to die, even after being severed from its body. All Heracles could do was bury it under a massive boulder, leaving it crushed and trapped — but still alive — for all of eternity.