“It's outrageous, unacceptable, incredibly unprofessional, and cannot be tolerated. 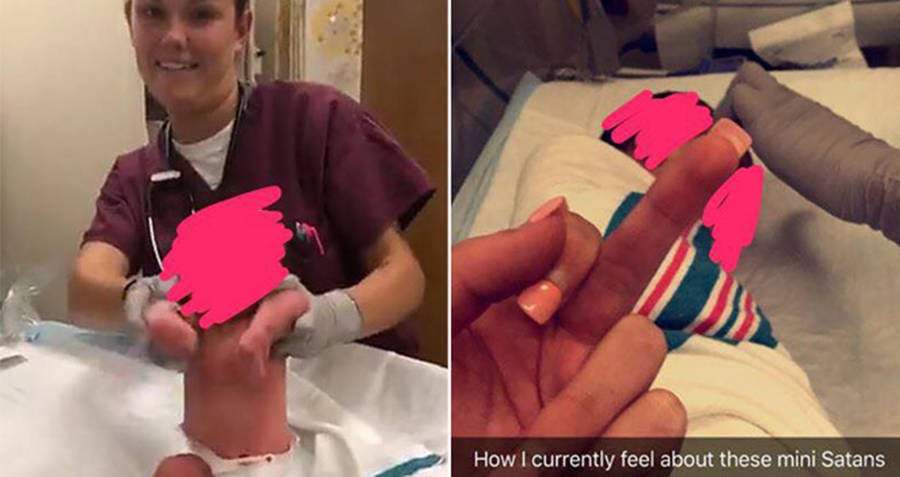 At least two nurses from the Naval Hospital Jacksonville have been removed from patient care after photos of them posing with newborns on Snapchat went viral.

In one of the photos, Allyson Thompson is shown flipping the bird to a newborn wrapped in a blanket. The caption reads “How I currently feel about these mini Satans.”

In another photo, Thompson is seen holding a baby by its arms and making it dance to 50 Cent’s “In Da Club.”

Another nurse, Joanie Barrett was later identified as the other culprit.

According to a statement from the hospital, the nurses have been “removed from patient care,” and hospital officials are working on notifying the babies parents.

“We are aware of a video/photo posted online,” the statement said. “It’s outrageous, unacceptable, incredibly unprofessional, and cannot be tolerated. We have identified the staff members involved. They have been removed from patient care and they will be handled by the legal system and military justice. We’re in the process of notifying the patient’s parents.”

There has been no response from Thompson or Barrett.

After the photos were shared on Facebook, comments began flooding in from enraged parents, and other users.

“I’m sickened by the actions taken by these two individuals!!!!!” wrote Lisa Wagoner Buttrey. “We are suppose to trust care systems…..had it been my child they did this to loosing [sic] their license would have been the last thing they needed to worry about!!!!!!!!!!”

“Disgrace to the nursing profession! Kudos to the Commanding Officer for holding them accountable for their actions,” Diane Perrot added.

However, the nurses did have one sympathetic follower.

“While this young ladies actions were in poor judgment. I don’t think she deserves to be fired,” Tammy Elliott wrote. “She is young, made a huge mistake. You all attacking her innocent? Sounds to me like she has some frenemies that want her go down.”

Enjoyed this? Check out these nurses who were caught admiring a dead patient. Then, read about this nurse who’s accused of murdering at least 90 of his patients.