"I have been wearing New Balance shoes (at $160/pair) for the past 10 years. If they support Trump, I’ve bought my last pair," a now-former customer tweeted. 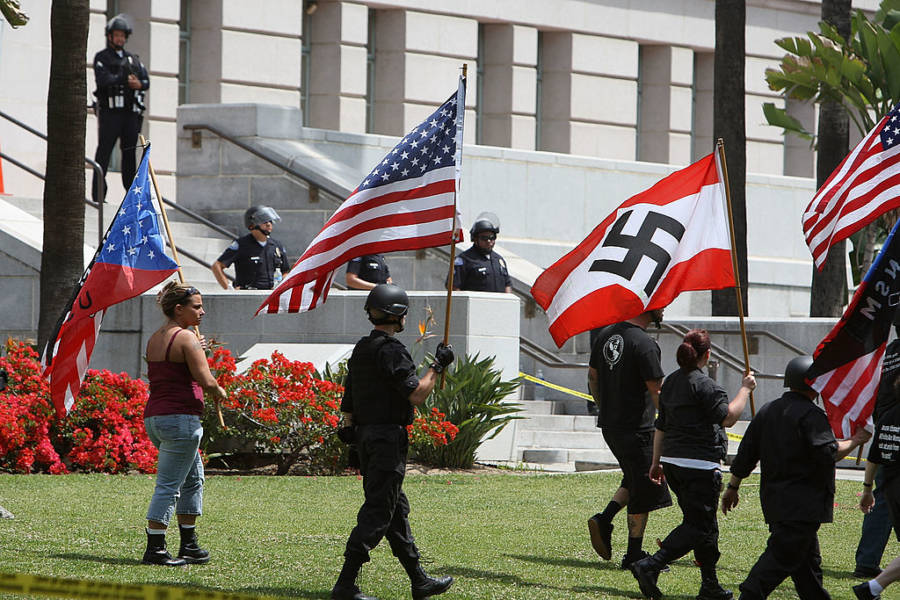 David McNew/Getty ImagesMembers of the National Socialist Movement march in Los Angeles in 2010.

The 2016 election cycle has reminded millions just how much race colors our worldview — and apparently also our choice of footwear.

Some on the alt-right have now declared New Balance the “Official Shoes of White People,” according to neo-Nazi blogger Andrew Anglin. The announcement comes on the heels of a senior official from New Balance referring positively to President-elect Donald Trump in an interview with The Wall Street Journal.

“The Obama administration turned a deaf ear to us and frankly, with President-elect Trump, we feel things are going to move in the right direction,” said New Balance Vice President of Public Affairs Matthew LeBretton.

Anglin, who runs the alt-right blog Daily Stormer, seized upon this quote to publish a series of posts describing how anti-Semites and white supremacists should buy New Balance shoes to show their support for their cause.

“I’m a Nike guy. Or rather, I was,” Anglin wrote on the Daily Stormer. “It’s time to get on-board (sic) with New Balance now. Their brave act has just made them the official brand of the Trump Revolution.”

As for what exactly that revolution entails, “My ideology is very simple,” Anglin told the Los Angeles Times last year. “I believe white people deserve their own country.”

However, whatever Anglin’s beliefs, it seems as though he took LeBretton’s quote out of context. LeBretton was actually responding to a question regarding the Trans-Pacific Partnership trade agreement (TPP), which Trump staunchly opposes, as does New Balance.

In hopes of clarifying this, New Balance has since released a statement on social media in hopes of emphasizing that they only meant “We have been, and will always remain, committed to manufacturing in the United States,” as said to the Boston Globe — but that may be too little too late.

The backlash against New Balance is already in full swing. Videos of anti-Trump protesters burning or flushing the shoes quickly began to pop up on social media:

@SoleCollector @newbalance good to know. I made a little bonfire tonight 🙂 pic.twitter.com/yOdCTbQgac

It seems both sides of the Trump divide now equate New Balance with white supremacy.

“New Balance is making a gesture to support White people and to support US manufacturing. We need to support that,” Anglin wrote. “I see New Balances now becoming the official shoes of White people. I myself am due a new pair of sneakers.”

Next, read about the “unannounced” parade that the KKK is planning to throw in celebration of Donald Trump’s victory, before understanding why the KKK’s official newspaper endorsed Trump for President.