They're using stone tools to smash open fruits and nuts regularly, in more than 80 percent of observations.

Between approximately 2.5 and 3.5 million years ago, humans entered the Stone Age when they started using rocks as tools. Now, at least one group of white-faced capuchin monkeys in Panama has followed suit.

According to a study published in bioRxiv on June 20, the monkeys are using rocks as tools in order to do things like smash open nuts and shellfish. This makes them just the fourth non-human primate group ever recorded using tools.

“We were surprised that this behavior appears to be geographically localized,” Brendan Barrett from the Max Planck Institute for Ornithology and the study’s lead author told New Scientist.

Researchers can’t say for sure how long these monkeys have been using stone tools, but the behavior was first noted back in 2004 when a co-author, Alicia Ibáñez, spotted it happening on the island.

A team of researchers then returned in the spring of 2017 to place cameras across Jicarón and two nearby islands in hopes of actually capturing the monkeys at work. Sure enough, over the course of a year, tool use was recorded on Jicarón on 205 days, indicating that this is a regular practice.

“At the most active tool use site, 83.2% of days where capuchins were sighted corresponded with tool use,” the study said. 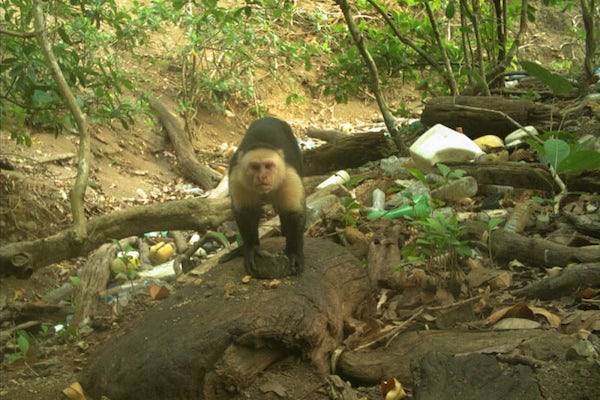 New ScientistA capuchin monkey captured on video using a rock as a tool.

Though primates in the wild have been documented using objects like sticks for tools, the capuchin monkeys in question join just a handful of other non-human primates who have entered their own kind of stone age. They are only the second American species and the fourth overall. Others include certain chimps in West Africa and certain macaques in Thailand, while another group of capuchin monkeys from South America that uses stone tools may have been doing so for some 700 years.

The capuchin monkeys described in the new report likely joined this small group of non-human primates able to use tools because of the specific conditions in which they live. These monkeys are “highly terrestrial, under decreased predation pressure and potentially experience resource limitation compared to mainland populations,” the study states, explaining that these are “three conditions considered important for the evolution of stone tool use.”

But apart from the why, the researchers are certainly wondering about the how — how these particular monkeys made such a momentous leap forward. The answer, however, may only involve dumb luck.

The researchers indicated that instead of a natural, sustained, evolutionary path toward stone tool use, it’s possible that there is an element of chance when it comes to entering the stone age (even for humans, long ago). In other words, one individual monkey with above-average-intelligence could have figured out how to use tools, leading others to simply mimic him. This notion that chance may have played a large part appears to follow from the fact that only a very small group of these monkeys are using stone tools whereas others even in the immediate area are not.

Either way, add these monkeys to the list of animals that can use tools, once thought to have been a skill of humans alone.