Lawmakers in poor states are trying to make their personal religious beliefs law in an effort to turn their fortunes around. 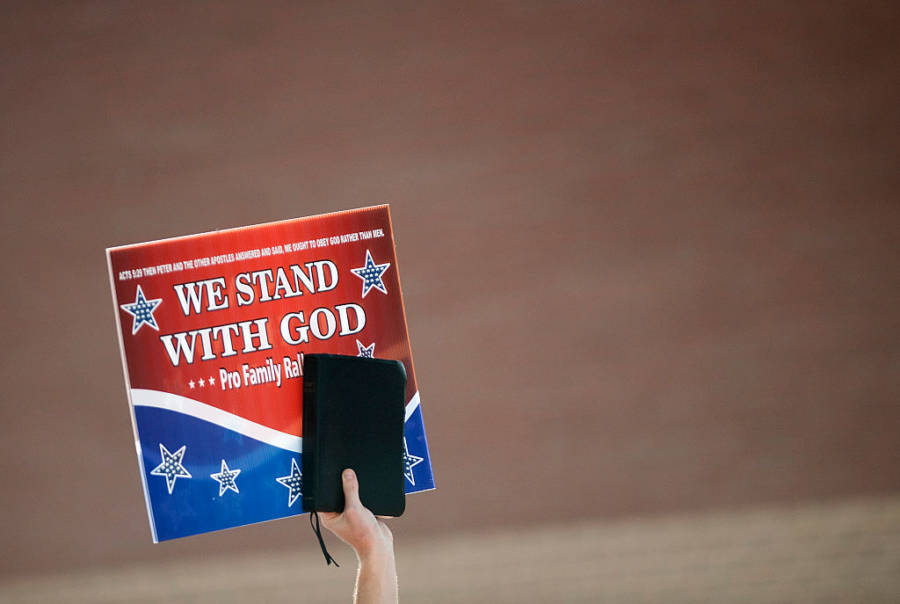 Ty Wright/Getty ImagesA supporter of Kim Davis holds a sign and Bible into the air during a rally in Grayson, Kentucky.

Starting this Friday, public schools in Kentucky will be allowed to teach the Bible.

With House Bill 128 local school boards can create elective courses on the Christian and Hebrew scripture, with the hopes of bringing God back into the classroom.

“The Bible is the single most impactful literary work that we have in Western civilization,” Rep. DJ Johnson, the bill’s sponsor, said on the floor in February. “It affects our culture, our values, our laws.”

The Bible affects our laws.

It’s a statement which likely has James Madison turning over in his grave.

In his memorandum on the First Amendment, the Constitution’s main author wrote that any future laws catering to a particular religion would surely “leave crevices at least through which bigotry may introduce persecution; a monster, that feeding & thriving on its own venom, gradually swells to a size and strength overwhelming all laws divine & human.”

Despite this prescience, religion is now overwhelming laws — but it’s not the faith most Republicans will tell you to worry about that’s systematically dismantling the building blocks the country was founded on. 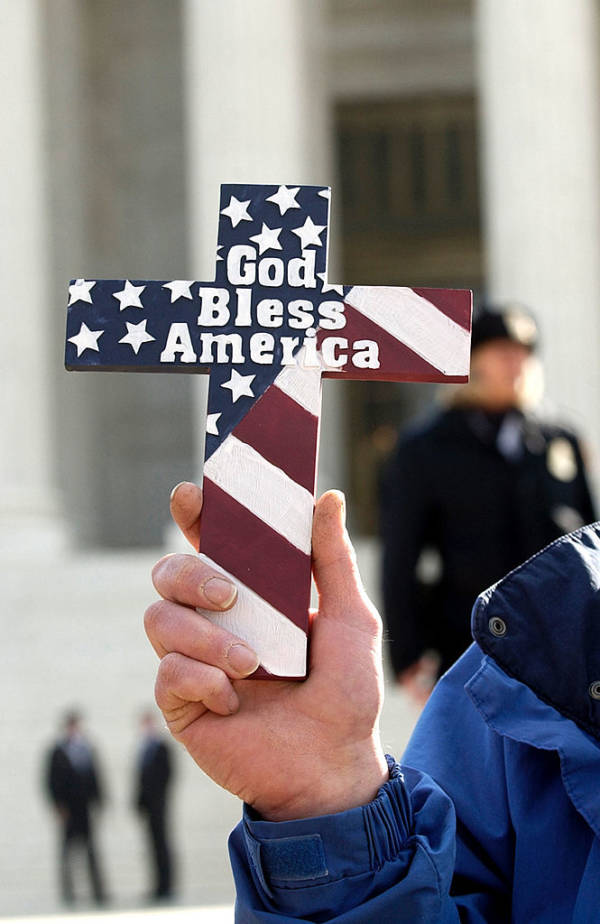 Ironically, its “sharia law” instilling mortal fear in the hearts and rhetoric of the far right.

And yet, each year Republicans push America closer and closer to merging religion and government.

The wealthiest states — the ones with cash and time to burn — aren’t the ones choosing to allocate tax payer-funded resources toward passing bills that impose one religion’s values on everyone else.

Instead, politicians who represent regions of crumbling infrastructure and skyrocketing unemployment are choosing to snag votes via God rather than good policy.

This is in line with national trends (and international trends), whereby a clear correlation exists between poverty rates and religiosity.

“This is because inequality is associated with a range of social problems that combine to make people feel insecure and in need of the comfort offered by religion,” suggests Dr. Tom Rees in the Journal of Religion and Society.

Life expectancy in some areas in Kentucky is six years shorter than the national average. Nearly 50% of one county is obese.

But 2017’s Senate Bill 17 allows student groups within public schools to deny applicants if their sexuality isn’t in accordance with the group’s “mission.”

In the same session the state passed Senate Bill 5, which prohibits abortions after 20 weeks (most states ban the procedure after 24) and requires the woman to listen to the fetus’s heartbeat and look at an ultrasound before the abortion.

Faced with a record number of homicides in Louisville (118 last year and set to increase in 2017), Kentucky Governor Matt Bevin called on the “power of prayer.”

“Go around the block, pause on each corner, pray for the people there, move to the next corner,” he said while describing his plan of action to reporters. “I truly believe we’re going to see a difference in our city. I personally believe in the power of prayer.”

Kentucky is the fifth poorest state in the country, but they’re praying that prayer can change that. 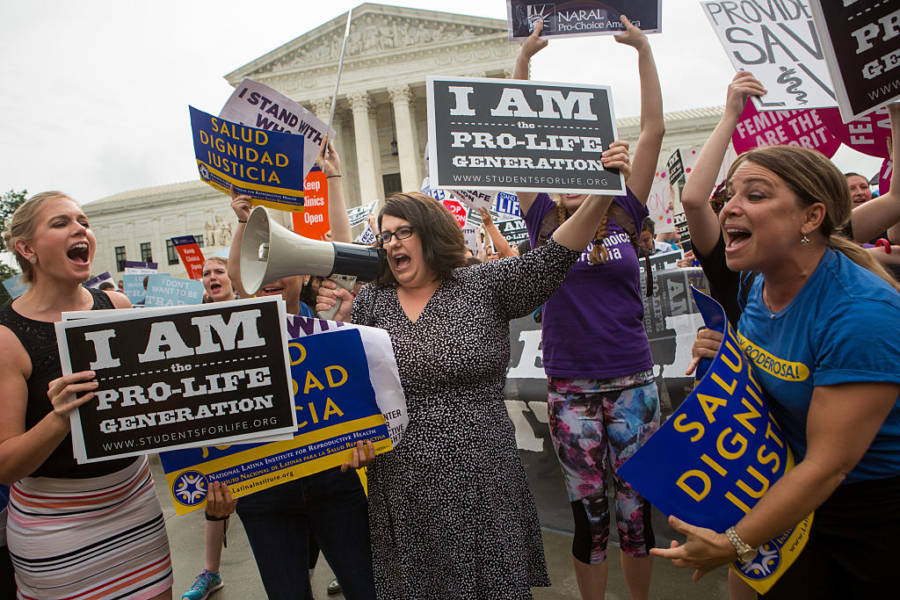 Allison Shelley/Getty ImagesKristan Hawkins, president of Students for Life, center, and other pro-life protesters clash with pro-choice protesters in front of the U.S. Supreme Court.

And they’re not the only ones allocating resources in the name of Jesus.

While Texas isn’t one of the poorest states, a new study revealed that it has the highest rate of pregnancy-related deaths in the entire developed world.

But state legislators did not pass a single bill regarding maternal health. Instead, they were called back to a special legislative session to vote on a stalled bill that allows the state to regulate which bathrooms transgender people use.

Indiana, the fifteenth poorest state, directed its funds toward passing the new “School Prayer Bill.” This redundant piece of legislation says students cannot be punished for praying in public schools — a right already protected by the Constitution.

Mississippi, the absolute poorest state in America, is about to enact House Bill 1523, which has been called “the worst anti-LGBT law in America.”

It will put into state law the view that “marriage is or should be recognized as the union of one man and one woman” and that “male (man) or female (woman) refer to an individual’s immutable biological sex as objectively determined by anatomy and genetics at time of birth.” 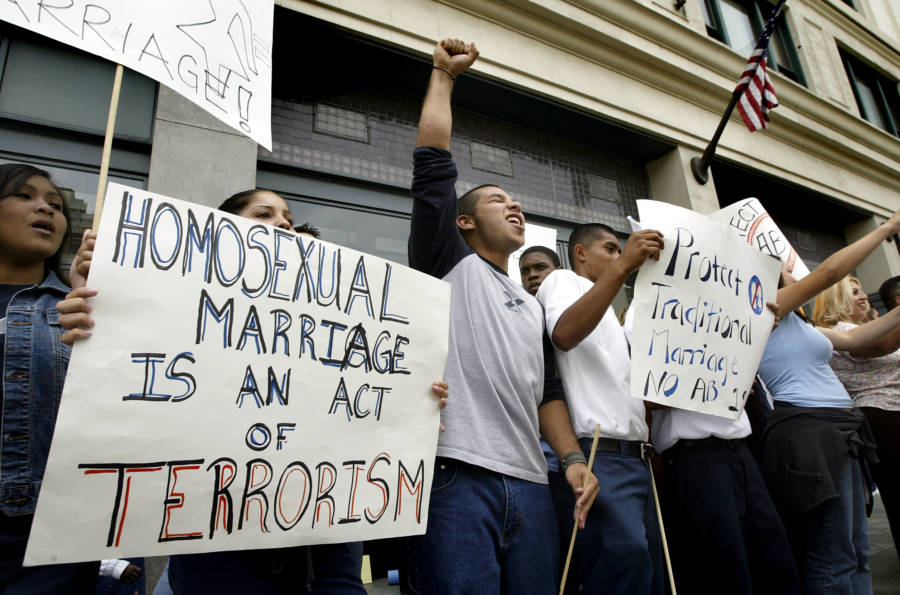 David McNew/Getty ImagesDemonstrators hold sign reading, “homosexual marriage is an act of terrorism” as they chant slogans against same-sex marriages at an anti-gay rally.

Arkansas, the second poorest state, has decided to spend its legislative minutes on installing a gigantic granite monument of the Ten Commandments on the grounds of the Arkansas state capitol this past Tuesday.

The ode to Christianity is meant to honor “the historical moral foundation of law,” Republican Sen. Jason Rapert, who sponsored the legislation for the monument, said.

The statue itself was paid for by the American Heritage and History Foundation, but the costs of the impending lawsuit being filed by the ACLU of Arkansas will be paid for with the state’s nonexistent spare change.

“It cost the state hundreds of thousands of dollars when we challenged their abortion ban,” ACLU director Rita Sklar told NPR. “Talk about foolhardy.” 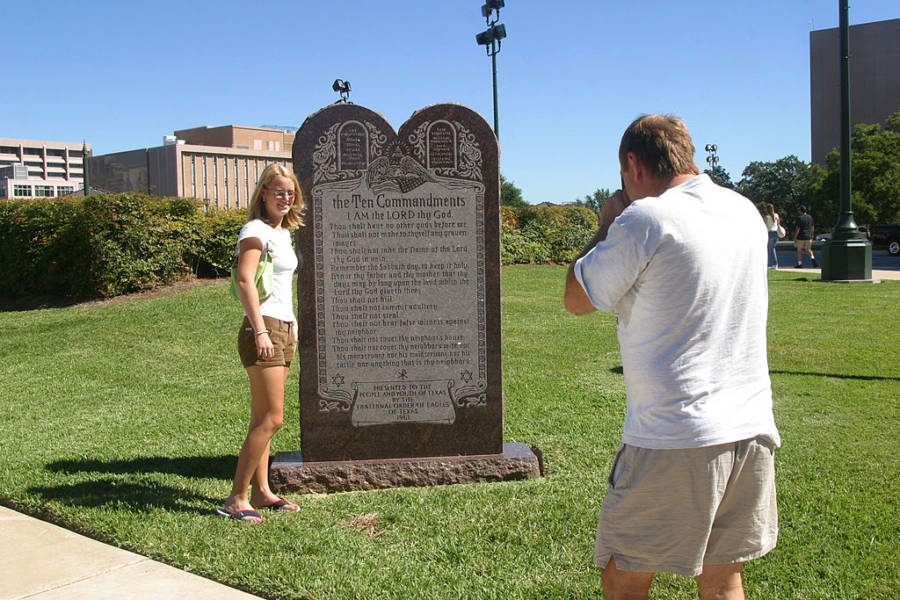 North Carolina, the country’s 10th poorest state, lost $3.76 billion because of its “bathroom bill” forcing people to use the restroom of the gender they were assigned at birth. 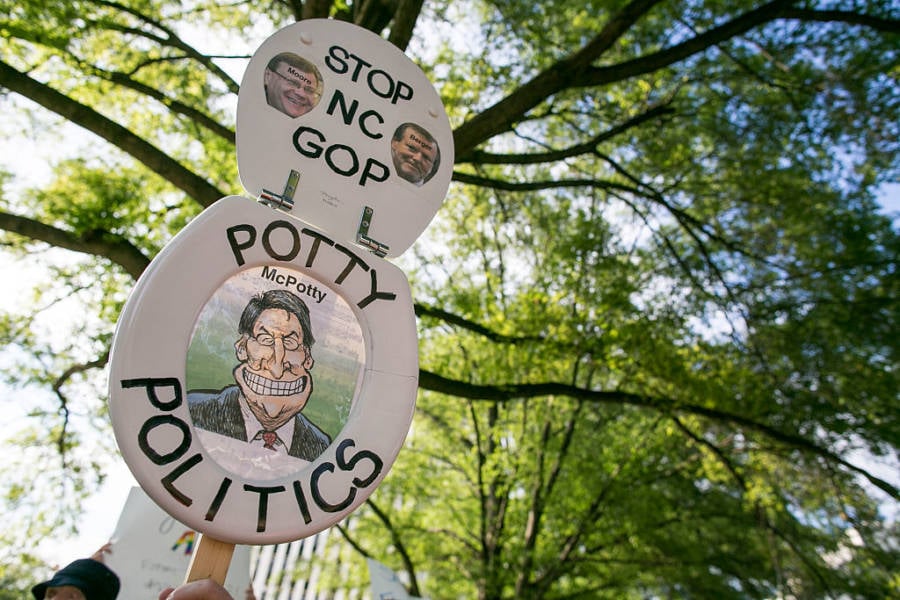 Al Drago/CQ Roll CallProtestors gather across the street from the North Carolina state legislative building as they voice their concerns over House Bill 2, in Raleigh, N.C.. House Bill 2, also known as the Bathroom Bill, which requires transgender people to use the public restroom matching the sex on their birth certificate, has received the attention of national media and the White House.

And its not just the states. U.S. Congress is 91% Christian and the Supreme Court just passed an unprecedented ruling requiring state governments to provide financial assistance to religious institutions.

The President of the United States suggested that a religious test should be given to refugees fleeing persecution — and that Christians should be prioritized.

“The far right has done a lot of fear-mongering about the undue influence that religious fanatics may soon exert on the body politic,” Washington Post commentator Catherine Rampell observed of the growing Christian influence on American laws. “Seems they better understood what they were talking about than most of us realized.”

Next, learn about the new House bill that will sentence teen “sexters” to 15 years in prison. Then, read our story on the changing face of America’s Immigration laws.