Dr. Amanda Hess was dressed in a hospital gown and ready to have a baby when she heard another mom-to-be crying in pain down the hall. 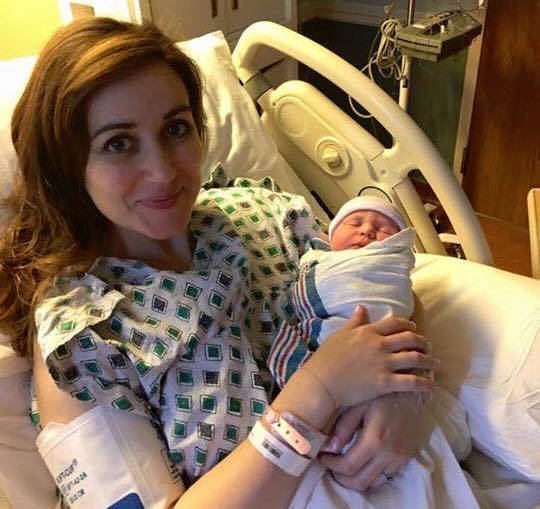 FacebookDr. Amanda Hess and her newborn daughter just a few hours after she helped another woman down the hall give birth.

Amanda Hess was dressed in a hospital gown and ready to give birth to her second child last week in Frankfort, Kentucky. But when she heard another mom-to-be’s cries of pain, the obstetrician-gynecologist figured her own kid could chill in the womb for a few extra minutes.

The woman down the hall, Leah Halliday-Johnson, was actually one of Hess’s own patients. So when nurses told Hess that Halliday-Johnson was going through labor much faster than they had anticipated, and that the umbilical cord was wrapped loosely around the baby’s neck, and that the doctor on call had stepped out for a break, Hess didn’t hesitate to spring into action.

Two celebrations in Kentucky hospital as doctor puts own birth on hold to deliver patient's baby. @TomLlamasABC with #AmericaStrong pic.twitter.com/sl96lHhBvC

“I just put on another gown to cover up my backside and put on some boots over my shoes, to keep from getting any fluid and all that stuff on me, and went down to her room,” Hess told WKYT. “I said, ‘You know, I’m not on call, I’m here in a gown, but I think we ought to have the baby.”

Struggling through the pain, Halliday-Johnson didn’t even notice that her pregnant doctor was in a hospital gown of her own.

“She was definitely in doctor mode,” Halliday-Johnson told NBC. “My husband noticed something was going on because she had on a hospital gown, but I didn’t notice that because I was on the delivery table. I was in my own world there.”

Moments later, Halliday-Johnson gave birth to a baby girl. That same night, Hess returned to her own hospital room and had a daughter of her own.

“I had actually taken a call the day before, so I thought really that I was working up to the last minute,” Hess told LEX 18. “But this was literally ’til the last second.”

Hats off to this #DrMom and member of Physician Moms Group #PMG, Dr. Amanda Hess! This picture was taken minutes after…

After it was over, Hess said that her pregnancy wasn’t a hindrance to her work. Really, just the opposite.

“I felt like the whole pregnancy, this little baby girl was my sidekick,” she said. “All the surgeries that I was doing, she was always there with me…just there up until the last minute she was working with me and delivered a little baby with me right before she came into the world.”

Next, read about how Canada just recognized the world’s first genderless baby. Then, watch some videos of people playing instruments while surgeons operate on their brains.