This discovery has scientists suggesting that not all ancient reptiles laid eggs. 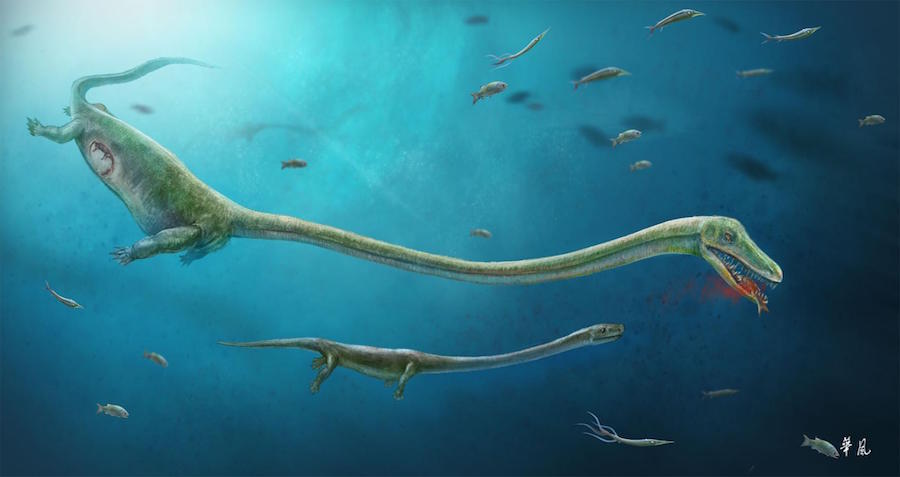 Turns out that at least some ancient “sea serpents” didn’t lay eggs.

Researchers have uncovered a fossilized long-necked marine reptile called a Dinocephalosaurus that is older than the dinosaurs. And inside its belly was a developing embryo, frozen in time, according to new research published in Nature Communications.

“I think you’d be amazed to see it, with its tiny head and long snaky neck,” said University of Bristol paleontologist Mike Benton, who was part of the research team that found the sea serpent, to Reuters.

A fish-eating reptile, the Dinocephalosaurus swam in the waters near what is now southwestern China roughly 245 million years ago. It had a very long neck (five or six feet) compared to its body (13 feet), and used “paddle-like flippers” to get around, according to Jun Liu, a paleontologist at China’s Hefei University of Technology. Liu also suggests that the creature primarily ate fish, a theory supported by its tiny head but large, canine-filled mouth.

Furthermore, the Dinocephalosaurus was the primary root of a large vertebrate group called archosauromorphs, which would go on to include birds, crocodilians, dinosaurs, and even flying pterosaurs. And while the Dinocephalosaurus may look like similar to plesiosaurs — or what you think of when someone says Loch Ness Monster — they are not connected.

Taxonomy aside, the most unique aspect of the newly uncovered fossil is what’s likely an embryo developing inside it, suggesting that creatures such as the Dinocephalosaurus did not lay eggs but instead gave birth, much like mammals.

If true, this would revolutionize modern science’s perception of vertebrate reproductive systems.

Next, check out the first dinosaur brain ever unearthed, before having a look at the recent discovery of the first-ever dinosaur tail with feathers.