See The Surprise Eruption Of Russia’s Raikoke Volcano From Space

It was silent for 95 years and showed no signs that it was about to erupt — but then it did. 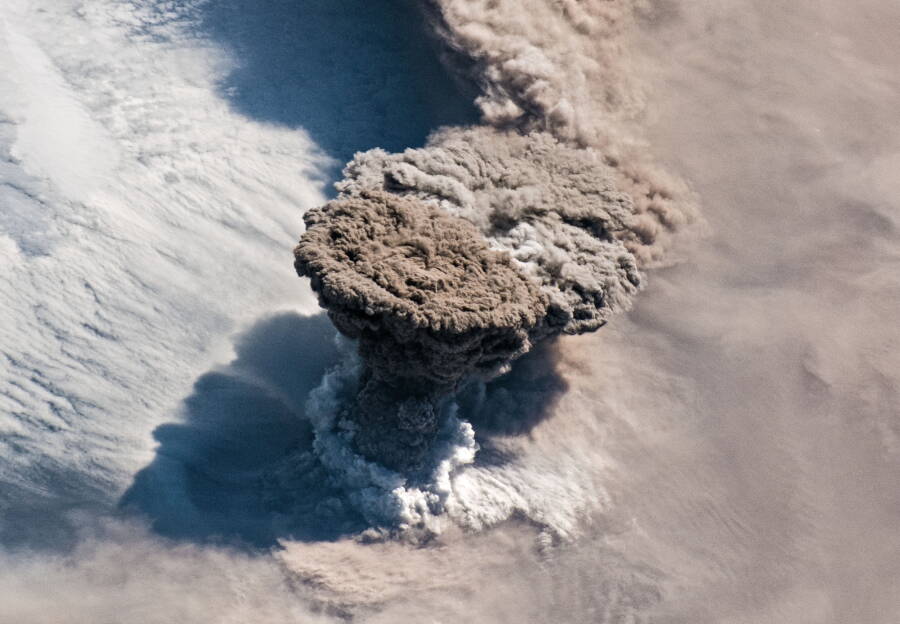 Sometimes the view is simply better from above — way above. This was certainly the case with the stunning photos of the Raikoke Volcano’s eruption that were captured all the way from outer space by a number of satellites as well as the International Space Station (ISS).

According to NASA’s Earth Observatory blog, Raikoke — located in Russia’s Kuril Islands — spouted a plume of ash and volcanic gas from its 2,300-foot-wide crater at around 4 a.m. on June 22. What’s more, this incredible eruption was not something that was expected to happen, given that the island volcano had mostly been dormant for 95 years.

Scientists at the Volcanic Ash Advisories Center (VAAC) in Tokyo who are tracking the development of its ash plume noted that the smoke had reached an altitude of eight miles above the surface of the Earth. However, data from the CALIPSO satellite indicates that parts of the plume have gone even higher, possibly reaching an altitude of 10 miles.

No matter how high the smoke rose, the images captured from ever higher above remain absolutely stunning.

“What a spectacular image. It reminds me of the classic Sarychev Peak astronaut photograph of an eruption in the Kuriles from about ten years ago,” volcanologist Simon Carn at Michigan Tech remarked to NASA, referring to a neighboring volcano also located on Russia’s Kamchatka Peninsula. 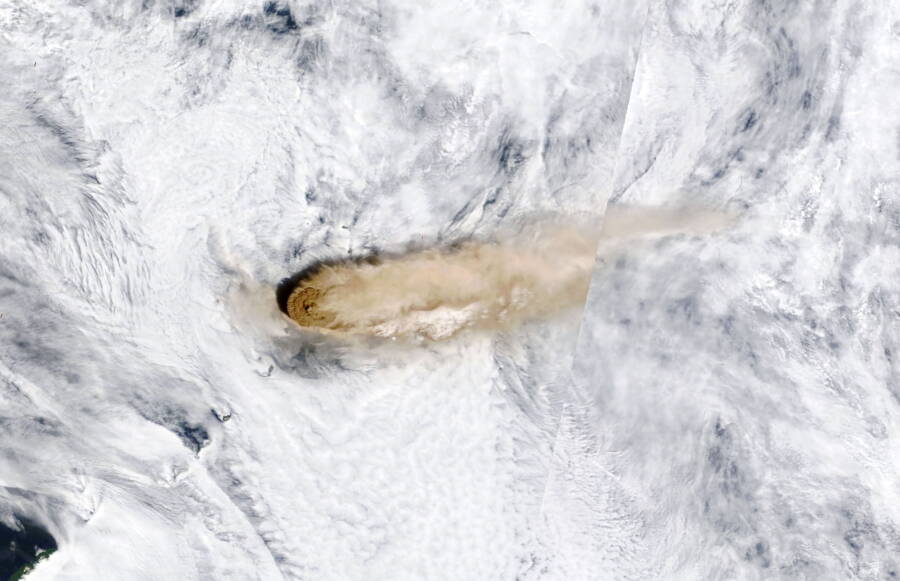 As visible in the photos, the taller smoke plumes from the eruption registered as a dark brown while the smoke nearer the bottom appeared white.

According to Carn, the plume’s white, puffy base could suggest a number of things. Carn suspected that it was likely water vapor condensation from the explosion, or simply a chemical interaction between Raikoke’s magma and the surrounding seawater.

“Raikoke is a small island and flows likely entered the water,” Carn explained.

Regardless, though the eruption made for a spectacular display, the event also could have proved devastating. The high-altitude reach of eruptions like these can mean that their ash — containing sharp rock fragments and volcanic glass from the magma — pose an immediate danger to aircraft flying in the area. The surge of volcanic material from underground can also have an impact on our planet’s climate.

In the case of Raikoke, the eruption was remote enough so as to have not caused any discernable devastation on a major level to this point. According to the European Space Agency, the Raikoke Volcano’s ash plume has since drifted north over the Bering Sea. 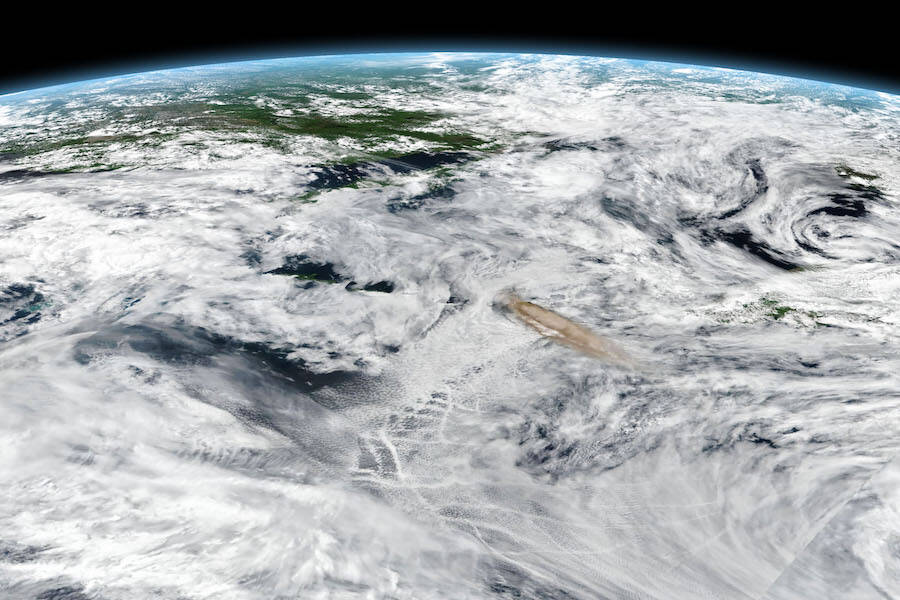 Raikoke is an uninhabited volcanic island that is part of the Kuril Islands, which spans from Japan to Russia’s Kamchatka Peninsula. The region where Raikoke is located is known as the Pacific Ring of Fire, where the shifting of the tectonic plates in the Pacific Ocean happens frequently. Thus, it is also where a majority of the world’s earthquakes and volcanic eruptions tend to happen.

Raikoke nevertheless had been quiet for nearly a century, with its last eruption recorded in 1924 — and, before that, 1778. The volcano’s first eruption in 1778
was catastrophic because it destroyed the upper third of the entire island. The explosion prompted the first volcanological investigation on the mostly forgotten Kuril Islands two years later in 1780. 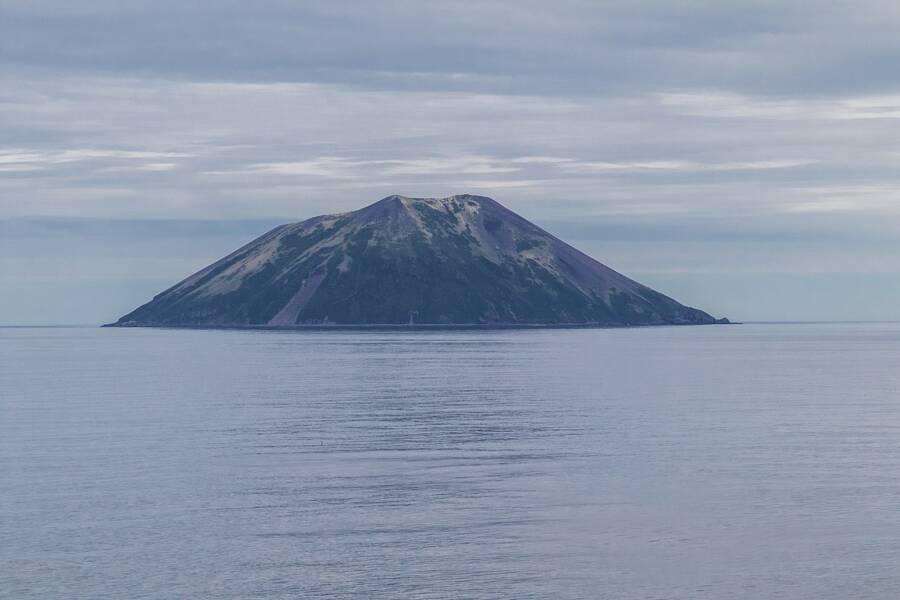 Despite the spectacular sky show (or potential destruction) that a large eruption can bring about, volcanic eruptions like Raikoke’s are not as rare as we might think. In fact, there are approximately 20 volcanic eruptions that are currently happening this week alone. But luckily for us, the Raikoke eruption left the world with some truly spectacular images.

After learning about the stunning eruption of the Raikoke volcano, discover 14 agonizing photos of Pompeii’s victims frozen in time. Then, take a look at the world’s coolest pictures of volcanic eruptions.