The lake of sewage ended the game early as the stadium officials scrambled to figure out how to stop it.

A spring training game at Dodgers Stadium was brought to a screeching halt on Tuesday when a sewage leak began pouring raw sewage on the field.

The Dodgers were at the bottom of the fifth inning in their game against the Angels when a water main burst, resulting in a sewage leak. The pool of sewage started near the Dodgers’ dugout, before spreading into the field, and pooling around third base.

“I thought it was Gatorade or something coming from the stands I don’t know,” said Dodgers outfielder Andrew Toles. “They said it was the sewer. I smelled it. It was nasty, man.”

At first, the game was paused, as the grounds crew spread a drying agent in an attempt to clean it up. When that didn’t work, the stadium staff attempted to push the sewage off of the field using large brooms.

The players remained on the field for 10 minutes before heading back to their respective dugouts while officials attempted to find out if it was a stadium or city issue. Finally, after 32 minutes, the game was called. 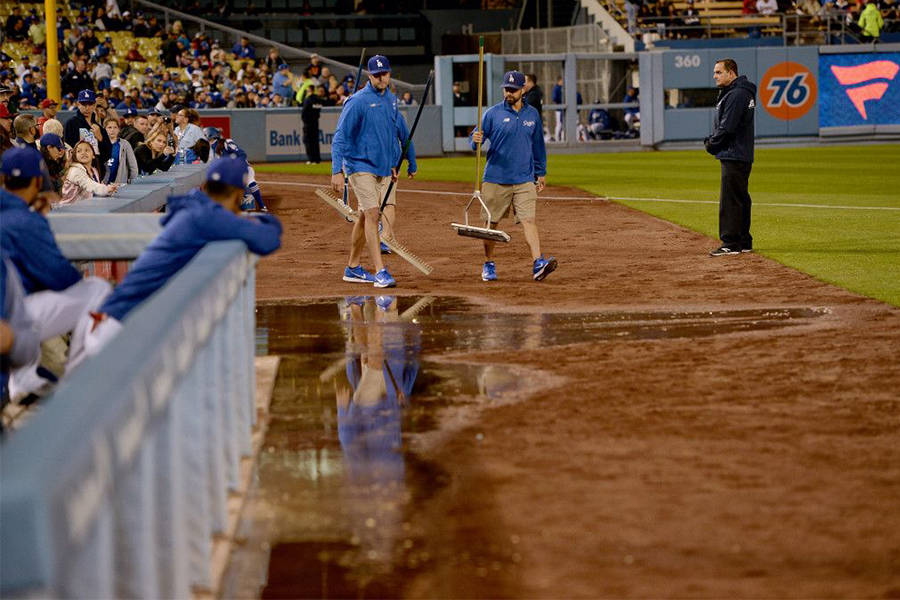 The stadium crew attempts to clean up the sewage leak with brooms.

“Apparently, there was a pipe backup on two different levels of the stadium,” Dodgers president and CEO Stan Kasten said after the game. “We don’t know exactly where the backup was or what caused it. It had something to do with a main pipe here, as well as a main pipe outside the stadium.”

The water main break not only compromised the field but the stands, the coaches rooms, and the clubhouse as well. According to the players and several fans on Twitter, the stench was overwhelming.

The leak took several hours to clean up and resulted in the water main being shut off entirely. Stadium officials employed several methods to clean it up, including brooms, drying agents, and vacuums, before finally cleaning the field. Despite the setback, however, the team manager claims that the stadium will be up and running once again before opening day.

Though the game ended early, the players and managers managed to remain upbeat, even joking about the turn of events with reporters.

“Crappy way to end the spring,” Dodgers pitcher Ross Stripling joked. “Get it?”

Next, check out the man who killed his wife after she turned off his football game. Then, take a look at a breakdown of how much game time you actually get when watching football on TV.