The disturbing rampage was captured on video by a visitor. Miraculously, the zookeeper survived and asked to return to work as soon as possible. 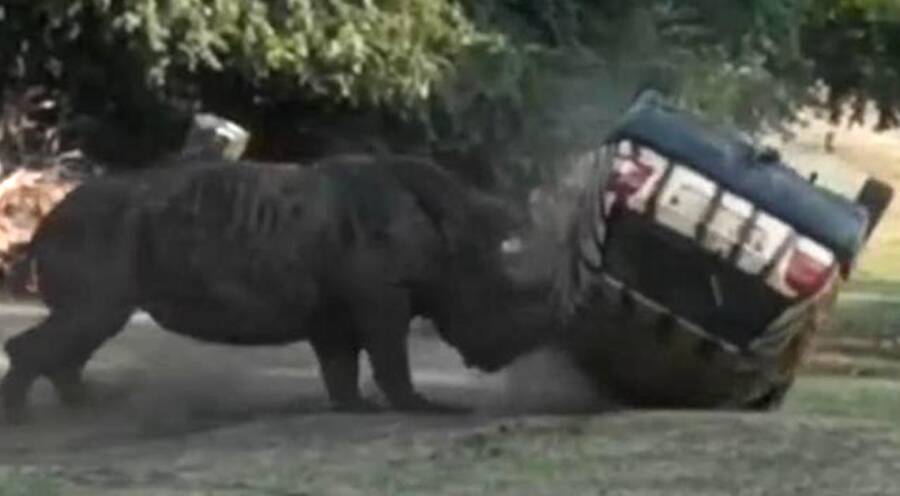 Being a zookeeper can be a fulfilling occupation for animal lovers. But dealing with wildlife, even with decades of proper training, can still lead to life-or-death situations, as it did for one German zookeeper when a male rhinoceros charged and flipped her vehicle while she was in it.

According to German outlet Deutsche Welle, the incident happened at the German safari Serengeti Park and was recorded by a visitor — which means the public had to witness as the rhino beat the car’s exterior to a pulp.

The defensive rhino was a 30-year-old bull named Kusini who had been brought to the park only 18 months ago to participate in a breeding program. While park officials are still trying to determine what sparked the animal’s reaction, they do suspect that the rhinoceros may be having difficulty adjusting to its new herd.

In the shocking video of the attack, the rhino is visibly irritable as he charges at the facility’s small zebra-striped vehicle — in which one zookeeper had been trapped — with full force. It’s unclear how long the terrifying encounter lasted but the video shows the rhino digging its sharp horns into the vehicle’s body and completely flipping it over multiple times.

Looking at the torn-up car in the video, it’s difficult to imagine anyone stuck inside surviving such a volatile attack. But the park confirmed that the zookeeper survived and escaped the rampage with only minor bruises and a concussion.

“She is very experienced, with us for 25 years. She has a concussion and bruises but wants to work Friday again,” Serengeti Park manager Fabrizio Sepe told German newspaper Bild.

Sepe added that though the male rhino posed no risk to park visitors, he was typically only allowed onto the park premises in the mornings and evenings after visitors had left.

Einstein Gamer/YoutubeThe terrifying ordeal was caught on camera and shows the rhino repeatedly charging at the car.

This rhino attack is not the first time that the German animal park made headlines. Earlier in May, another zookeeper at Serengeti Park somehow wound up in an enclosure with two male lions during the park’s feeding time. That keeper also miraculously survived despite having been mauled and bitten repeatedly by the lions.

Despite their seemingly sleepy gait, rhinoceros are fierce and sturdy animals, capable of living up to 40 years. Depending on their species, an adult rhino can weigh between one to more than two tons and can run at a speed of 30 miles per hour.

These animals have a good sense of smell and hearing, but they have very poor eyesight which may explain sudden charges or attacks like the one that occurred at the park.

Even with unfortunate incidents such as this, Kusini is still a “very valuable animal” given the severe drop in the world’s rhino population. The animals have suffered a steep decline around the world due to extreme poaching and loss of habitat.

In fact, since 1960 the black rhino population, one of five subspecies of rhinoceros that exists, experienced a 96 percent drop in its population, according to statistics from the African Wildlife Foundation.

Furthermore, the northern white rhino, another subspecies of rhinoceros, became functionally extinct last year after the death of the species’ last known male. Rhino bulls like Kusini are important for researchers to conduct breeding programs which have been crucial in maintaining the vulnerable population of these unique creatures.

After witnessing the terrifying rhino attack on a zookeeper and her car, learn how Indian park rangers are drastically reducing the number of poaching on its rhinos. Then, discover how severe elephant poaching in Africa has caused the animals to become tuskless.