The class had a better chance of winning the Powerball or getting struck by lightning twice than they did of surviving this long together. 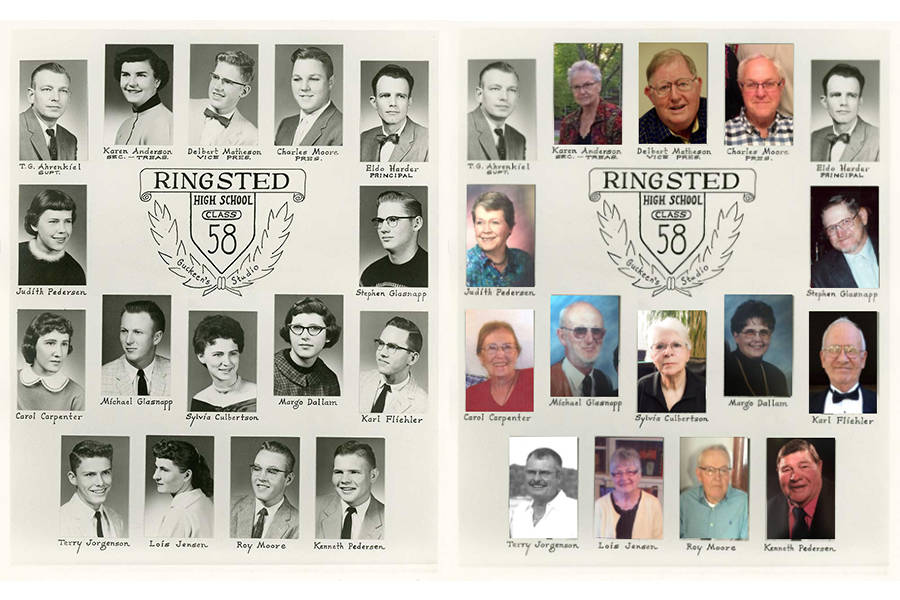 The Des Moines RegisterThe class of 1958, then, and now.

A graduating class from a small town in Iowa has beaten incredible odds, by all surviving long enough to attend their 60-year high school reunion.

The Ringsted High School class of 1958 all had a better chance of winning the Powerball than being alive to attend the reunion, as well as being struck by lightning — twice. According to David Herzog, Iowa State University assistant professor of mathematics, the odds the class beat are 1 in 177,467,459.

“We all talk about who will be the first to die,” class member Del Matheson said. “It’s like a contest.”

So far, it doesn’t even look like there’s going to be a clear winner. Out of the 14 graduates, none of them have developed alcoholism, cancer, or any of the usual ailments that occur post 70 years old. Very few of them smoke, and all of them are still physically active.

Only one member, Kenneth Pederson, has found himself in severely ill health over the years when he had an aortic aneurysm. However, despite three months in the hospital, he pulled through and is doing well.

“He’s ornery,” said his wife. Pederson was known as the class clown, and often dropped snowballs on unsuspecting students from the roof of the school.

Besides living longer than most people expected, the graduates have also lived longer than the Ringsted High School itself. While it was brand new in 1958, the school and most of the surrounding buildings have been torn down to make room for improved facilities.

Now, reunions take place in a local tavern, where their record-breaking survival is often a topic of lighthearted conversation.

“We always joke that we are all still alive and how lucky we are,” said Matheson. “We see it as something to strive for. But we did nothing. It was a gift.”

It truly does seem that way. According to Matheson, the class claims there really is no secret to their impressive existence.

“Many of our parents died shortly after high school graduation, so we don’t have a good record there,” Matheson said when asked if it was simply good genes. Some students attributed it to eating healthy or staying fit, but for the most part, they just said they’re still going because of their togetherness.

Even after graduating, the close-knit class would often make trips to visit old coaches and teachers, and then eventually just each other. Some have stayed behind in the small Iowa town, while others have branched out to places like Oregon, Colorado, and Texas. However, they still gather whenever they can to reminisce.

Though they were all close friends from the start, some have even taken their close friendship to another level. Two of the classmates, Margo and Mike Glasnapp, started dating freshmen year of high school, and have been together ever since, and when Pederson was in the hospital recovering from his aneurysm, he says he got calls from every single classmate, wishing him well.

The 60-year reunion is set to take place in the fall, and so far, everyone has RSVP’d with a resounding “yes.”

Next, read about the world’s oldest woman, who lived to be a whopping 122 years old. Then, check out these people you may be surprised to learn were alive at the same time.