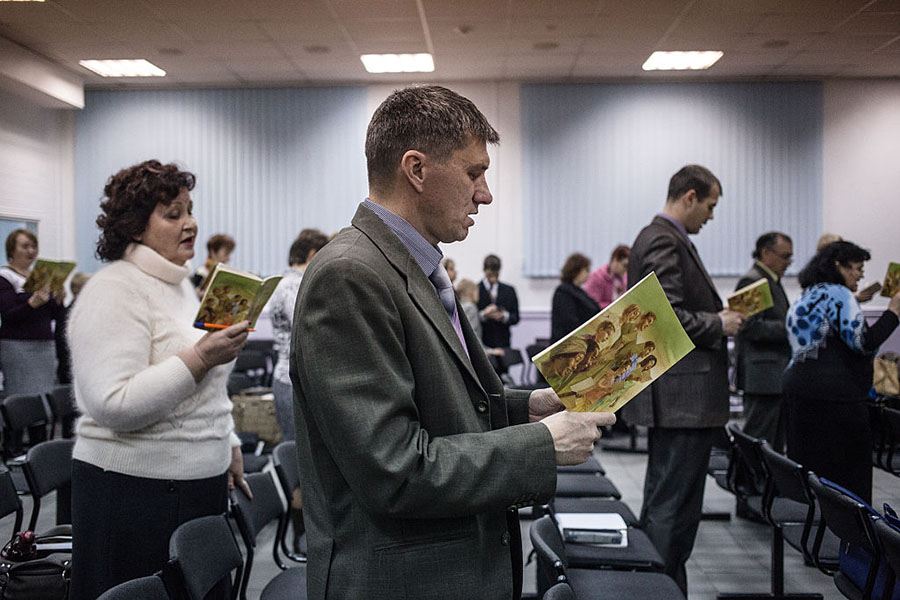 Photo by Alexander Aksakov/For The Washington Post via Getty ImagesJehovah’s Witnesses sing songs at the beginning of a meeting in Rostov-on-Don, Russia.

It appears that the U.S. presidential administration isn’t the only federal entity who’s got religious bans on the brain.

On Thursday, Russia’s Supreme Court ruled in favor of the Kremlin, which earlier this year initiated an effort to legally ban the approximately 175,000 Jehovah’s Witnesses (JW) from the country for their “extremist” views, The Washington Post reported.

In court, government officials called the pacifist Christian sect a “threat” to “public order and security” and thus a religious group that must be banned.

The Court appeared to agree with the argument, and as such deemed that anyone who does not honor its ruling — namely that the state has a right to seize and liquidate JW churches and that any expression of JW faith are prohibited — will face several thousand dollar fines and a maximum of ten years in prison.

“Jehovah’s Witnesses, like all other religious groups, must be able to peacefully enjoy freedom of assembly without interference, as guaranteed by the constitution of the Russian Federation, as well as by Russia’s international commitments and international human rights standards,” the European External Action Service said in a statement.

In New York City, Human Rights Watch deemed the ruling a “terrible blow to freedom of religion and association in Russia.”

While the ruling is recent, the Russian state’s treatment of Jehovah’s Witnesses is not. Given their pacifism and abstention from voting, the U.S. Commission on International Religious Freedom has noted that the Russian state has long looked askance at Jehovah’s witnesses.

“The treatment of the Jehovah’s Witnesses reflects the Russian government’s tendency to view all independent religious activity as a threat to its control and the country’s political stability,” the commission, which monitors religious expression at a global level, said in a statement earlier this month.

“This approach dates back to the Soviet period and impacts other religious groups, including peaceful Christians and Muslims.”

The court’s decision comes a year after a law went into effect that imposed restrictions on smaller religious groups, including Mormons and Pentecostals.

According to Radio Free Europe, the Russian Orthodox Church — the largest religious denomination in the country — supported the law, which is officially intended to combat religious extremism and terrorism.

Still, given the law’s vague language, some have criticized it for giving the state legal permission to bully evangelical groups into submission.

For now, however, it appears that Russia’s Jehovah’s Witnesses are prepared to fight back.

“We will appeal this decision, and we hope that our legal rights and protections as a peaceful religious group will be fully restored as soon as possible,” Yaroslav Sivulsky, a spokesman for the group’s Russia organization, told Radio Free Europe in an e-mail.