Dick Cheney Says Russian Meddling In U.S. Elections Could Be “An Act Of War”

The former veep offered some strong remarks on Russia's role in the 2016 presidential election. 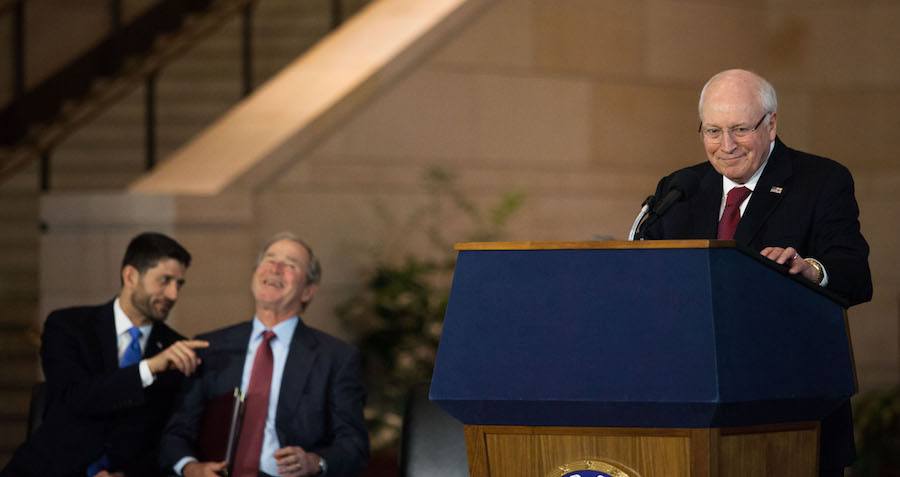 Keith Lane/Getty ImagesFormer US Vice President Dick Cheney addresses the crowd during a ceremonial unveiling of a marble bust in his likeness at the U.S. Capitol. Also pictured are House Speaker Paul Ryan (R-WI) and former President George W. Bush.

Dick Cheney just upped the ante on the stakes of Russian interference in the 2016 U.S. presidential election.

On Monday, the former Vice President told a captive audience at the Economic Times Global Business Summit that Russia’s meddling could be “considered an act of war.”

“There’s not any argument at this stage that somehow the election of President Trump was not legitimate, but there’s no question that there was a very serious effort made by Mr. Putin and his government, his organization, to interfere in major ways with our basic, fundamental democratic processes… In some quarters, that would be considered an act of war.”

The Trump White House has repeatedly said that Russian interference did not impact the outcome of the presidential election. Still, U.S. intelligence agencies have confirmed on numerous occasions that Russians hacked the Hillary Clinton campaign and the Democratic National Committee in hopes of propelling Trump to victory — and Cheney says that we should take these reports seriously.

“I would not underestimate the weight that we as Americans assign to the Russian attempts to interfere with our internal political processes,” Cheney said, adding that Putin has conducted himself “in ways that none of his predecessors have done for the last 40 years.”

According to Cheney, this is part of Putin’s broader plan to gain more territorial influence and control.

“I think he has designs on the Baltics,” added Cheney. “We know he wanted Crimea — he took it,” referencing the Russian cyber campaign in the Ukraine.

Former President George W. Bush made a series of public comments on NBC’s Today Show a few weeks back wherein he indicated an inclination to agree with Cheney.

“We all need answers,” Bush said, in regard to what transpired between Trump associates who contacted Russian officials during the election cycle.

A number of Trump associates are under FBI investigation because of their connections to Russian officials. These include: Paul Manafort, a former campaign manager, and Trump’s son-in-law Jared Kushner, who is also a senior adviser to the president.

Next, check out how George W. Bush rebuked Trump’s travel ban, before finding out why the families of 9/11 victims have filed a lawsuit against Saudi Arabia.