This Is How Much Sugar Is In Your Daily Starbucks 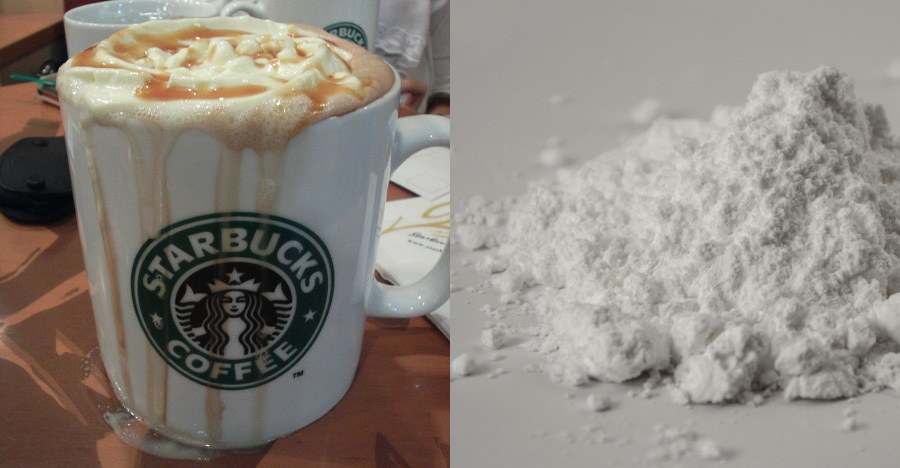 We all know sugar is bad for us. Scientists have already determined that high amounts of sugar in your diet can literally slow down your thinking and damage your memory, yet Americans still consume 12.5 teaspoons more sugar each day than the American Heart Association recommends.

Over the course of a whole year, that comes out to an average of 130 pounds of sugar per person — that’s 130 pounds of a substance that studies have found to be just as addictive as heroin and cocaine. And according to a new report by the British campaign group Action on Sugar, when it comes to the dangerous white stuff, Starbucks is one of the worst offenders.

The group gathered data on 131 hot drinks at Starbucks and eight other major coffee shops in Britain (the Starbucks nutrition facts shows similar levels of sugar in their U.S. stores). The results were shocking.

What Starbucks calls its “best” drink, the Peppermint White Chocolate Mocha, has nearly 20 teaspoons of sugar (79 grams). Perhaps most appalling was Starbucks’ worst offender, the hot mulled fruit grape with chai, orange and cinnamon, which contains an unbelievable 25 teaspoons of sugar.

To put that in perspective, the American Heart Association recommends no more than 9.5 teaspoons of sugar per day. It’s advice worth listening to: According to the Centers for Disease Control & Prevention, excess sugar doesn’t only make people fat, it also dramatically increases a person’s risk of death from heart disease.

Sodas and high-sugar fruit drinks have often taken a large chunk of the blame for Americans’ high sugar intake, but it turns out that a lot of that blame can actually be placed on coffee establishments, who have for years now been selling customers what are essentially large milkshakes, cleverly marketed as coffee.

Starbucks has committed to reducing added sugar by 25 percent by the end of 2020, and offers some lower sugar options. But next time you order that “sweetly sophisticated…Smoked Butterscotch Lattee and Smoked Butterscotch Frappuccino…Creamy and sweet, with a kettle-cooked finish,” remember that you just drank more sugar than you were supposed to have all day.

For more information on sugar, check out how sugar affects your brain.