In addition to impressive camouflage techniques, stick insects may have also evolved to be eaten on purpose.

Kobe UniversityFor insects with very low mobility, such as stick insects, bird predators could help them to expand their habitats.

Not only can stick bug eggs survive being eaten by birds, this it actually helps distribute their population across great distances. The information comes from a study published in the journal Ecology on May 29, 2018.

Kenji Suetsugu, a Lecturer at Kobe University and lead author of the study spoke with All That’s Interesting about the finding and why he was interested in studying the dispersion of stick insects.

“Despite being well-disguised in their natural habitat, they are still subject to frequent predation by birds,” said Suetsugu. “I am interested in the fate of their offsprings.”

As you may have guessed from their name, stick insects look like sticks. It’s not just a coincidence of course. Their natural ability to mimic twigs is one of the Earth’s more effective natural camouflages.

Unfortunately for them, stick insects can’t travel far on their own. Yet they’ve managed to disperse all over the place, reaching regions they’re not even native to.

While a common assumption is that when birds eat the eggs of insects, they have no chance of survival, that’s not the case with the stick insect.

The secret to these tiny creatures’ miraculous survivability rests in their hard-shelled eggs. The scientists found that when some stick insect eggs are eaten by birds, the voided eggs can go unharmed and hatch successfully. The study suggests that these insects – in the same way plants rely on animals to distribute their seeds – use this strategy to spread their offspring far and wide. 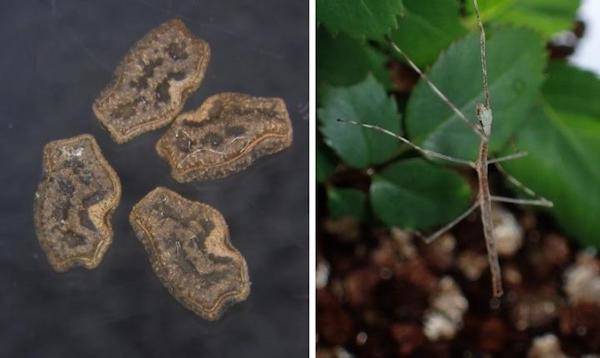 Kobe UniversityStick insect eggs collected from bird excrements, and the stick insects born from the eggs.

The researchers tested their hypothesis by feeding three species of stick insect to brown-eared bulbuls birds – one of the main avian predators of stick insects in Japan.

A few hours later the birds passed the eggs. The researchers found between five percent and 20 percent of the eggs survived unharmed and some of the eggs from one of the species even hatched.

However, Suetsugu said that “similar methods could be possible in other insect species.” But that would depend on whether the species had “both parthenogenetic reproductive capability and hard-shelled eggs.”

The researchers found that this method of spreading eggs can have a profound effect on the insects’ distribution, gene flow, and community composition. “For example,” said Suetsugu, “some stick insects are distributed in oceanic islands that have never been connected to other land. It is possible these distributional patterns are due to passive avian dispersal.”

Based on this strategy, it’s likely that there’s a correlation between the flight paths of birds and the genetics of stick insects. It’s something the team is planning on looking into further.

Next read about female dragonflies who play dead to avoid having sex. Then read about the cockroach that crawled into a sleeping woman’s ear and got stuck.