This may soon become the first Alzheimer's drug to receive FDA approval in more than a decade. 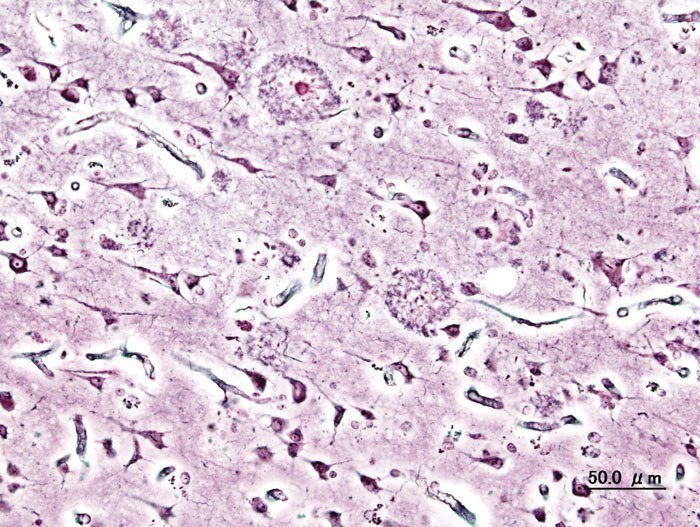 Wikimedia CommonsThe brain plaques that are at the root of Alzheimer’s, as seen under a microscope.

Imagine a pill that can treat Alzheimer’s.

Researchers have found that pharmaceutical giant Merck’s new drug, verubecestat, can successfully switch off production of the toxic amyloid proteins believed to be behind the disease in preliminary trials.

Verubecestat stops amyloid proteins from forming the sticky plaques that disrupt signals inside the brains of Alzheimer’s patients. These brain plaques are the disease’s most visible sign that doctors can find.

Recently reported in Science Translational Medicine, the drug’s preliminary trial was simply concerned with gaining information about the drug’s safety and dosage.

However, researchers were pleasantly surprised to find that, even in this early stage, verubecestat successfully eliminated the protein that forms the brain plaques nearly in their entirety.

If the new drug continues to successfully slow the pace of mental decline by eliminating the plaques, it will almost certainly receive FDA approval, making it the first Alzheimer’s drug to do so in more than a decade.

“People are excited,” said John Hardy, the University College London neuroscientist who first proposed that amyloid proteins were the root cause of the disease, to the Guardian. “This is a very nice drug and I’m sure Merck are feeling very pleased with themselves.”

“Today there are very limited therapeutic options available for people with Alzheimer’s disease, and those that exist provide only short-term improvement to the cognitive and functional symptoms,” said Matt Kennedy, who led the trial at Merck, to The Guardian. “They do not directly target the underlying disease processes. There is an urgent need for [this].”

The new drug is currently entering Phase 3 human trials with 1,500 patients with mild to moderate Alzheimer’s and another 2,000 patients in earlier stages. Merck is due to report those crucial results in July 2017.

Next, read about the lung cancer vaccine from Cuba that’s getting FDA approval, before checking out the anti-aging pill that could double the human lifespan.