A Massive Supervolcano May Have Killed Off The Neanderthals

New research shows that the worst European eruption in 200,000 years may have caused an entire race to die out. 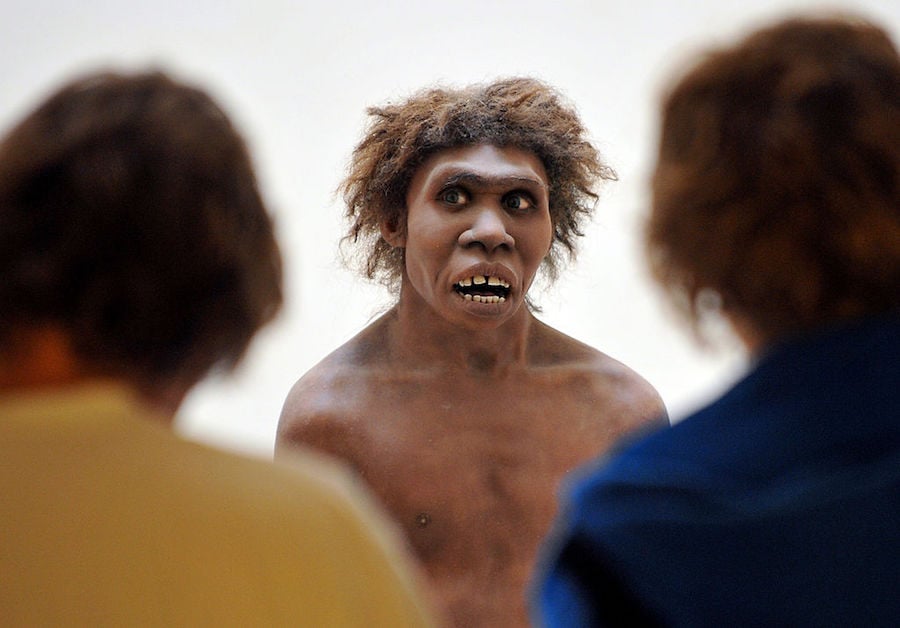 PIERRE ANDRIEU/AFP/Getty ImagesA model representing a Neanderthal man on display at the National Museum of Prehistory.

Did the Neanderthals die out because of one enormously catastrophic supervolcano?

New research published in the journal Nature suggests that a massive eruption in Europe may driven the Neanderthals into extinction.

Approximately 40,000 years ago, only a handful of Neanderthal communities still roamed Europe. But when the Italian supervolcano Campi Flegrei exploded in the largest eruption that Europe has seen in 200,000 years, it spewed forth more than 70 cubic miles of magma and covered 1.4 million square miles of the continent with ejected rock and ash.

Now known as the great Campanian Ignimbrite eruption, this would not have been witnessed directly by the remaining enclaves of Neanderthals, but they most certainly felt its effects.

“Sunsets would have been dark red for a year after the eruption due to sulfur in the atmosphere — imagine what that must have been like to see and wonder about,” volcanologist Benjamin Black told Inverse. “Both humans and Neanderthals — even if they were living far from the eruption — would certainly have experienced especially harsh and unusual conditions for several years after the eruption.”

Black and his team of researchers recently found that the eruption left between 50 and 250 million tons of sulfur dioxide in the stratosphere, leading to acid rain and colder weather ravaging Europe, as well as Asia and North America, for years.

“The situation for Neanderthals was dire by the time of the Campi Flegrei eruption,” said Black. “Their human cousins were steadily encroaching, and the territory occupied by Neanderthals was tenuous at best.”

A temperature decline like this caused life to become exponentially harder, but it was survivable — Homo sapiens managed it. For Neanderthals, however, it was a different story.

“It is hard to say just how close to the edge Neanderthals were by the time of the Campanian Ignimbrite eruption, and what might have been enough to finally push them past the tipping point,” said Black. “We do know that ecosystems and societies are complicated, and it’s possible the eruption gave Neanderthals a critical shove.”

Furthermore, Black’s research suggests that the Italian supervolcano in question may now be becoming active again, but an eruption is not imminent. Italian officials have still heightened the level from green to yellow, however, calling for more monitoring and studying of the situation.

Hopefully, there are no surprises. Today, more than half a million people live in the depression left behind by the cataclysmic eruption 40,000 years ago.

Next, read about the Pacific Islanders who do not have DNA linked to any known human ancestor.