"I’m hot, I’m beautiful, I’m 51. What are we going to talk about tonight? Being hot, being beautiful, being white?" 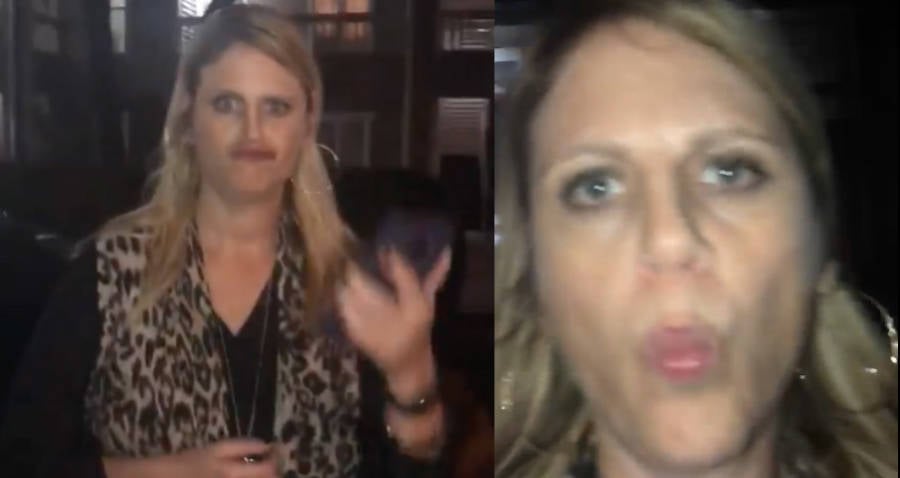 FacebookStills from a video of Susan J. Westwood delivering her racist rant to Chele Garris.

A white woman in Charlotte, N.C. lost her six-figure job after she was caught on video harassing her black neighbor while saying things like, “I’m white and I’m hot, so what are you doing here?”

Chele Garris was at the other end of this troubling exchange, and posted the videos she captured of the woman, identified as Susan J. Westwood, to Facebook on Oct. 26. Users have since viewed the videos more than 2 million times on Facebook alone.

The series of videos show the woman relentlessly approaching Garris and another woman believed to be Garris’ sister, questioning what they were doing in the parking lot of an apartment complex.

It appears as though Westwood approached the woman unprovoked, and she reportedly smelled of alcohol and appeared to be intoxicated.

According to the Charlotte Observer, the incident occurred on Oct. 19 and police say that Westwood has pending criminal charges against her, including two counts of communicating threats and two counts of simple assault.

Police did not immediately identify the woman, but after the videos were posted to Facebook, it didn’t take long for her identity to become known. Westwood is a senior business intelligence analyst and market researcher for Spectrum Enterprise, according to the New York Post.

Throughout the videos, Westwood repeatedly antagonizes the other women, who sometimes interject with questions and concern.

“Do I need to call the police?” Garris asks Westwood at one point. “Because I feel threatened.”

Meanwhile, Westwood continually insults the other women and makes complimentary comments about herself, at one point saying:

“Hi, how are you? I’m hot, I’m beautiful, I’m 51. What are we going to talk about tonight? Being hot, being beautiful, being white? Being — my new weave? Do you, do you live here?”

Garris confirms that she is, in fact, a resident of said apartment complex. But Westwood doesn’t seem to believe her. “What’s going on here in this parking lot that you feel that you need to congregate?” she says.

Even after Garris and her sister go back up the steps in the apartment complex, Westwood continues to harass them from the parking lot, even going as far as alleging that either one or both of the women are carrying a concealed weapon.

“Do I need to bring out my concealed weapon, too? This is North Carolina by the way,” Westwood screams.

“B*tch, I’m still gonna make $125,000 Monday morning,” Westwood continues. “Who are you? Do you live here? Is your boyfriend here? Is your baby daddy here?”

However, as Westwood would come to find out, she would not still be making $125,000 on Monday morning. According to a statement issued to the Post on Oct. 29, a spokesman for Charter Communications (parent company of Spectrum Enterprise) has confirmed that Westwood has been terminated from the company.

“The incident recorded in Charlotte is a blatant violation of Charter’s code of conduct and clearly disregards the company’s commitment to inclusion and respectful behavior,” the spokesperson said. “As such, Ms. Westwood’s employment with the company has been terminated, effective immediately.”

Next, read this story about a Republican’s racist speech where he says “There aren’t enough white kids to go around.” Then, find out how North Carolina’s anti-transgender bathroom law is costing the state millions.