Syrian Doctor Operating On Manchester Victims: “I Saw The Same Wounds In Aleppo”

For a doctor raised in Syria, the wounds from the Manchester suicide bombing are all too familiar. 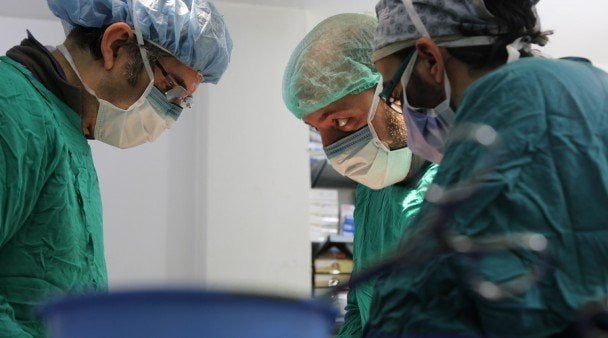 For most of the doctors treating victims of Monday’s suicide bombing attack in Manchester, England, the wounds were probably shocking.

But to Dr. Mounir Hakimi — a surgeon raised in Syria who is now living in Manchester — they were all too familiar.

The suicide bombing — which took place at an Ariana Grande concert in Manchester on Monday night — left 22 dead and dozens more seriously injured.

Hakimi had already operated on one young patient when he spoke to news outlets about the attack.

When he moved from Syria, he said, he never expected to see those kinds of brutal and senseless wounds in his new home.

While on trips to Syria with his organization, Hakimi has treated many victims of Islamic State attacks — including a five-month-old who lost her arms, legs, and parents in a shelling.

“I have been volunteering in conflict zones for over 20 years now. In that time I have worked in some of the most dangerous areas in the world, and witnessed what I thought was the worst of humanity…but Syria is different,” Dr. David Nott, a surgeon volunteering with Syria Relief, wrote.

“Because of the barrel bomb attacks, the majority of patients I was seeing were children. They had the most horrific injuries – whole parts of their bodies were torn off by thousands of pieces of red-hot shrapnel.”

Now the same terrorist group has claimed responsibility for this much closer bombing, which was carried out by 22-year-old Salman Ramadan Abedi, a Manchester-born man of Libyan descent.

There is one key difference between the wounds Hakimi is seeing in Manchester and those he’s treated in Syria: the treatments available for them.

“In Syria, you wouldn’t have much time and we would have to use sedation as a light form of anaesthetic,” he said. “In Manchester, I’ve got until tomorrow to operate and I have advanced technology. The patient will have a general anesthetic.”

But no matter where in the world they’re taking place, the attacks are horrific.

And no matter where in the world the attacks are taking place, the people trying to help outnumber the ones trying to hurt.

How the people of Manchester offered help to those in need after a devastating attack. #RoomForManchester pic.twitter.com/IjeFjC4DSZ

Next, read about how U.S.-led airstrikes have been mistakenly killing dozens of Syrian allies. Then, learn about the 13,000 civilians recently tortured and executed in a Syrian prison.