If it weren't for the neighbor who called the police to investigate a fellow tenant's whereabouts, the man's body might still be leaking blood into the kitchen below. 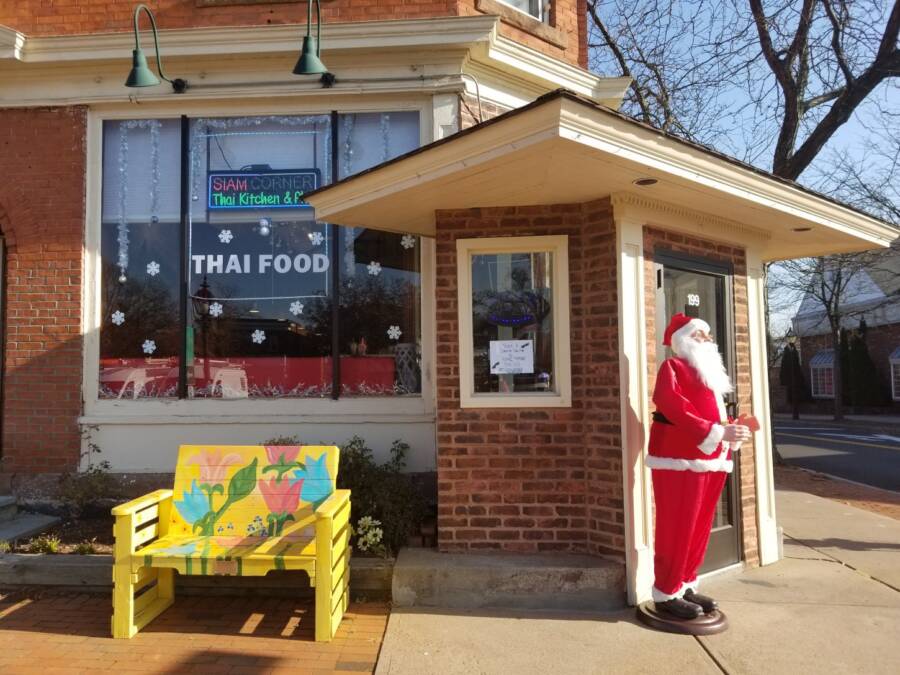 Siam Corner Thai KitchenOfficer Ryan Wilder was on his way to check on a missing person when an employee of the restaurant asked him to investigate a strange liquid dripping from the ceiling.

When Officer Ryan Wilder responded to a call in Windsor, Connecticut in May, initial reports seemed rather innocuous: a woman said she hadn’t seen her neighbor in a few days, and was concerned. As he entered the building, however, the seemingly harmless scenario quickly turned sour.

According to VICE, an employee of Siam Corner Thai Kitchen stopped the officer on his way upstairs and asked him to investigate a strange smell in the restaurant’s kitchen. The establishment was right below Officer Wilder’s primary assignment, and had a peculiar liquid leaking from its ceiling.

“I went into the restaurant and discovered a reddish brown substance dripping from the ceiling located behind the front counter of the restaurant,” Officer Wilder’s incident report explained. “It appeared that the dripping substance was possibly blood.”

A WFSB 3 news segment on the Windsor, Connecticut incident.

When he followed his intuition — and, of course, the liquid trail of potential evidence — that inkling was proven frightfully true. There was no response at the neighbor’s door, so Officer Wilder and a colleague climbed into the residence through an unlocked window.

What they found was a dead man lying in his bed.

“It was readily apparent that [name redacted] had been deceased for several days, as his body had begun stages of [decomposition],” Wilder wrote.

When the paramedics arrived, any suspicion of foul play rapidly evaporated. The man had simply died of natural causes — they found medications for heart failure and high blood pressure by his bed. 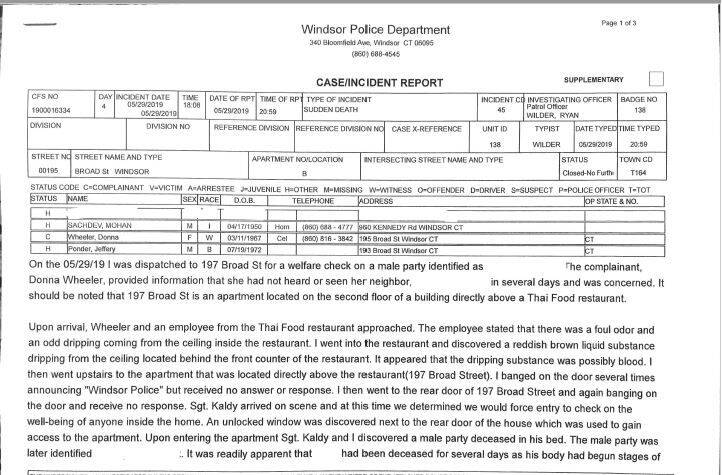 A biohazard company has since completed its “remediation” at the residence. Siam Corner Thai Kitchen, meanwhile, shared a post on Facebook explaining that it was closed for renovation.

Ironically, the renovations weren’t solely because of the dead man’s bodily fluids. Rather, the bloody leak exposed a flaw in the building’s structure that wasn’t up to code.

“We [are] currently closed to bring the restaurant into compliance with all current fire codes,” a staffer said. “We hope we can open next week.”

Without a concerned neighbor inquiring about the whereabouts of another tenant, the reddish brown liquid may still be dripping through the restaurants ceiling — and a serious fire code violation would’ve continued. Here’s to one instance of a justified police call!

After reading the macabre tale of a dead man’s decomposing body dripping blood through a Thai restaurant’s ceiling below, learn about the science of human decay from this captivating video. Then, read about how murdered model Iana Kasian was tortured, scalped, and drained of her blood by boyfriend Blake Leibel.