"It is definitely not good for people to go into the foam, but they just do not understand the risks." 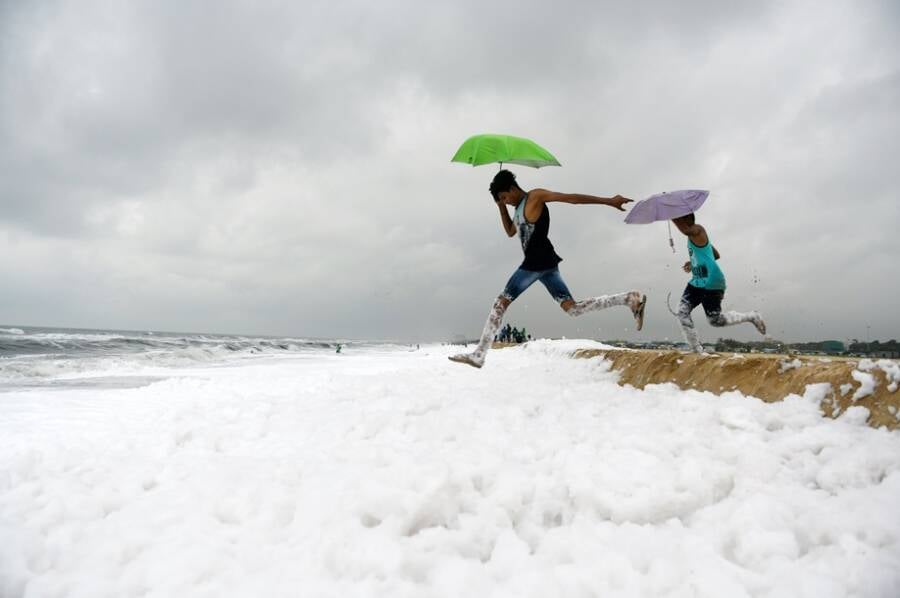 It’s a picturesque scene on Marina Beach in India as children frolic in the water among bubbles of white suds on the shore. But those aren’t ordinary bubbles — the suds are actually part of a toxic foam caused by pollution that seeped into the sea.

According to Agence France-Presse, the toxic foam has become an increasing problem on India’s crowded beaches, where tens of thousands of visitors expose themselves to the elements daily.

The toxic foam occurs during the monsoon rain season, when waste and pollutants on land are swept away into the ocean.

Officials said that the bubbles likely came from a mix of washing detergent, phosphate, and other sewage that has been whipped into a froth-like consistency in the sea.

Despite warnings from officials — and the putrid smell that the toxins release — beachgoers continue to play in the foam on Marina Beach in Chennai, covering themselves with the toxic suds and taking selfies. 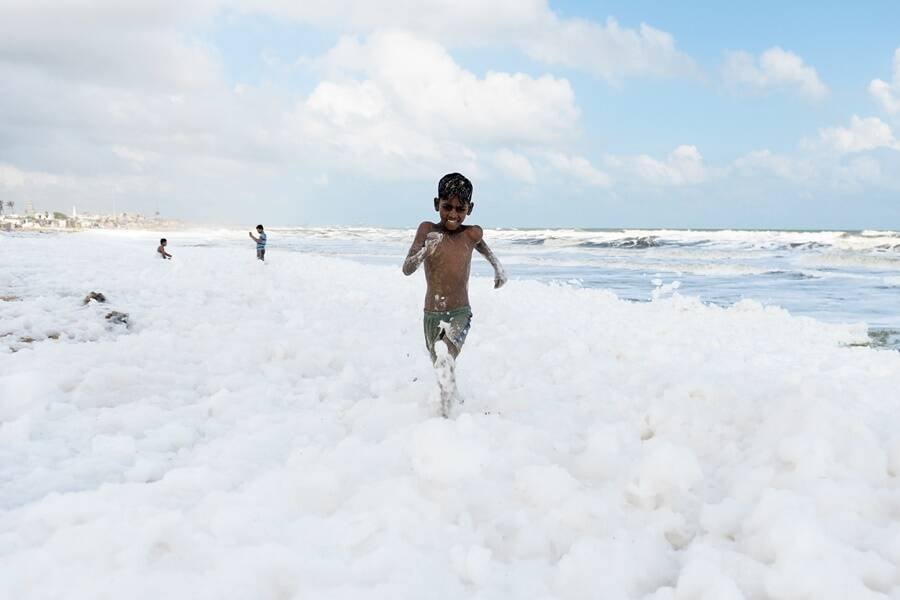 Arun Sankar/AFP via Getty ImagesChildren playing in the foamy discharge caused by pollutants.

Only 40 percent of the waste water in Chennai, a city of 7 million people, is treated. The rest goes straight into the sea, according to Pravakar Mishra, a scientist at the National Centre for Coastal Research.

“It is definitely not good for people to go into the foam, but they just do not understand the risks,” said Mishra, who has witnessed the chemical beach foam grow in recent years. Potential risks from exposure to the toxic bubbles include skin irritation and damage.

But it’s not just beach visitors who are being affected by the foam. Fishermen have been warned to stay out of the water and they are unable to sell their daily catch for fear of toxic contamination.

“Everyone thinks it is contaminated,” said 30-year-old fisherman Jeyaseelan. “My wage has been cut to next to nothing.” He has not been able to sell his small catch in recent days since the toxic bubbles began covering the beach.

The pollution on India’s beaches has grown worse in recent years. According to Mishra, volunteers collected nearly a ton of plastic and other garbage in just two hours during a recent clean-up at another Chennai beach.

“Pollution is now a bigger threat to India’s beaches than the rising seas,” said Mishra. But things could still get worse. In 2017, toxic run-off caused mass die-offs of fish on the coast of Chennai. Officials are now on alert in anticipation of another possible mass fish death due to the foamy toxins.

The toxic bubbles have not only shown up in Chennai. India’s capital, New Delhi, also experienced a chemical foaming on its Yamuna River during the annual Chhath Puja Hindu religious festival last month. Just like Marina Beach, the smelly foam covered the water and spilled out, exposing revelers to the toxins. 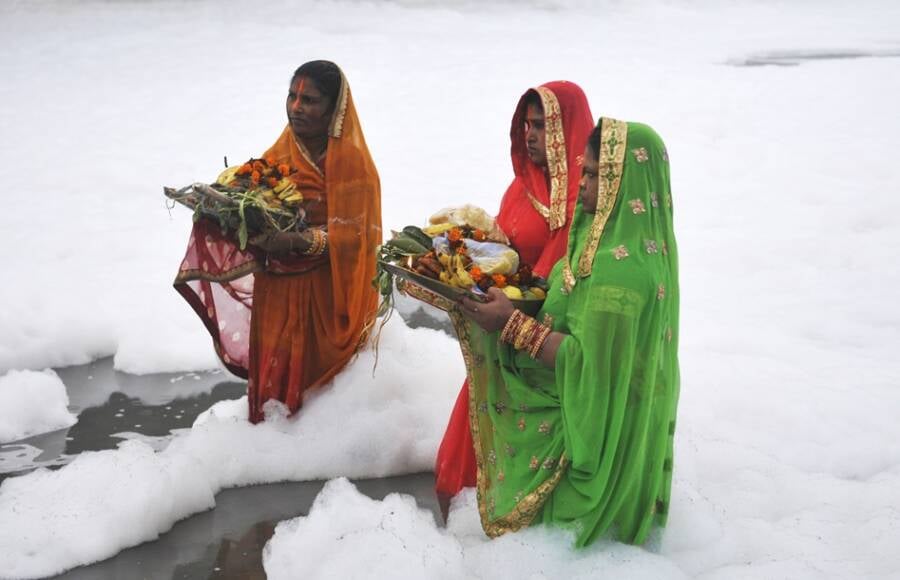 Sunil Ghosh/Hindustan Times via Getty ImagesDevotees perform rituals in the Yamuna river, which also experienced foaming due to heavy pollution.

Many devout Hindus at the festival waded into the toxic foam to wash and pray in the river, as is custom during the Chhath Puja. Many were knee-deep in the bubbles and stood in the foam for long periods of time.

The Yamuna River is the main source of water for capital’s 19 million people and is one of the most polluted rivers in the whole country.

“Yamuna is not a river anymore,” Manoj Mishra, an advocate with the Yamuna Jiye Abhiyaan group that works on clean river campaigns, told CBS News. “It’s a collection of 18 drains flowing into it, carrying a toxic cocktail of sewage, chemicals, detergents, industrial waste, and excreta.”

The worsening pollution in our environment can take on unexpected forms. So the next time you see an abnormal phenomenon, take caution or else you might find yourself in a dangerous bubble bath.

Next, check out 23 photos of toxic black snowfall in Siberia and take a look at the ghost towns that were deserted because of pollution.