A Pennsylvania teen has sued his high school for the "humiliating" experience of sharing space with a trans student. 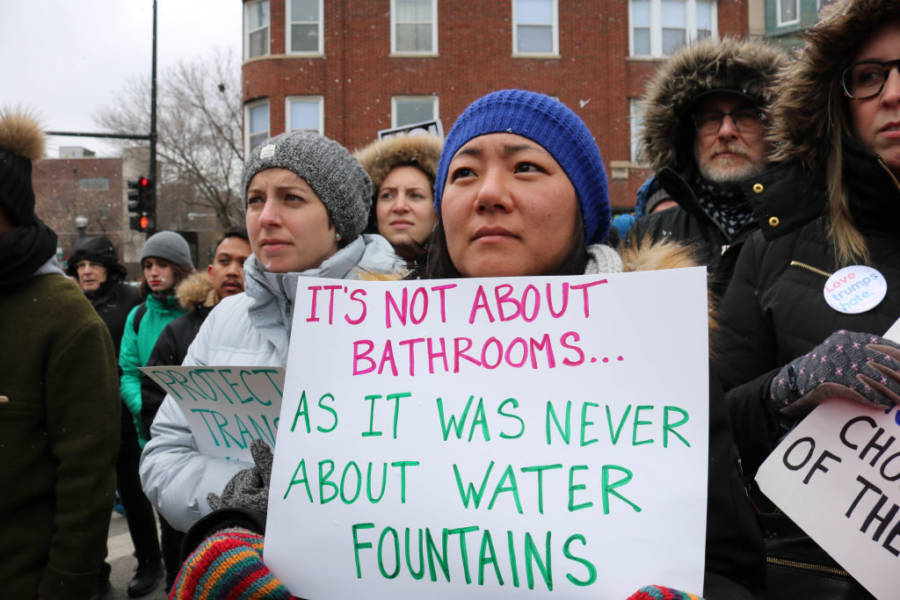 There has been a lot of talk about bathrooms as of late.

Most of it centers on how to protect transgender people, who often feel unsafe when using facilities designated for a gender with which they don’t identify. The counter — and evidence-free — argument typically comes from Republicans, who insist that letting trans people use whatever bathroom they want will allow sexual predators to disguise themselves in order to assault little girls.

Straight men are often left out in discussions of potential victimhood. That is, until now.

A teenager in Pennsylvania filed suit this week against the Boyertown Area School District because his high school’s trans-inclusive bathroom policy makes him feel embarrassed.

The junior, who is going by the name Joel Doe, is being represented by the Alliance Defending Freedom — a Christian legal group.

It all started when Joel noticed a transgender student changing next to him in the locker room.

“When he was standing in his underwear about to put his gym clothes on, he suddenly realized there was a member of the opposite sex changing with him in the locker room, who was at the time wearing nothing but shorts and a bra,” the complaint to the US District Court reads.

Joel complained to his principal, who reportedly told him to “tolerate” the situation and act naturally.

“Plaintiff has experienced embarrassment and humiliation, both in terms of being viewed and viewing a student of the opposite sex in a state of undress and because of the stigmatization and criticism he received from other students and adults,” the complaint adds.

Joel has, apparently, been holding in his pee and not changing into gym clothes because he’s afraid of being exposed to another trans student.

“The anxiety, embarrassment, and stress he feels as a direct result of (the school district’s) practice and actions has caused him to refrain from using restrooms as much as possible, stress about when and if he can use a given restroom without running into persons of the opposite sex, and opting to hold his bladder rather than using the school’s restroom,” Joel’s lawyers wrote.

The case contrasts sharply with that of Gavin Grimm, a transgender student whose fight to use the male restroom in school is still being argued in federal court.

Next, read about the debate over how trans people should compete in athletics. Then, learn how Trump reversed Obama’s stance on transgender rights.