The Oregon couple will have their first child sometime this summer. 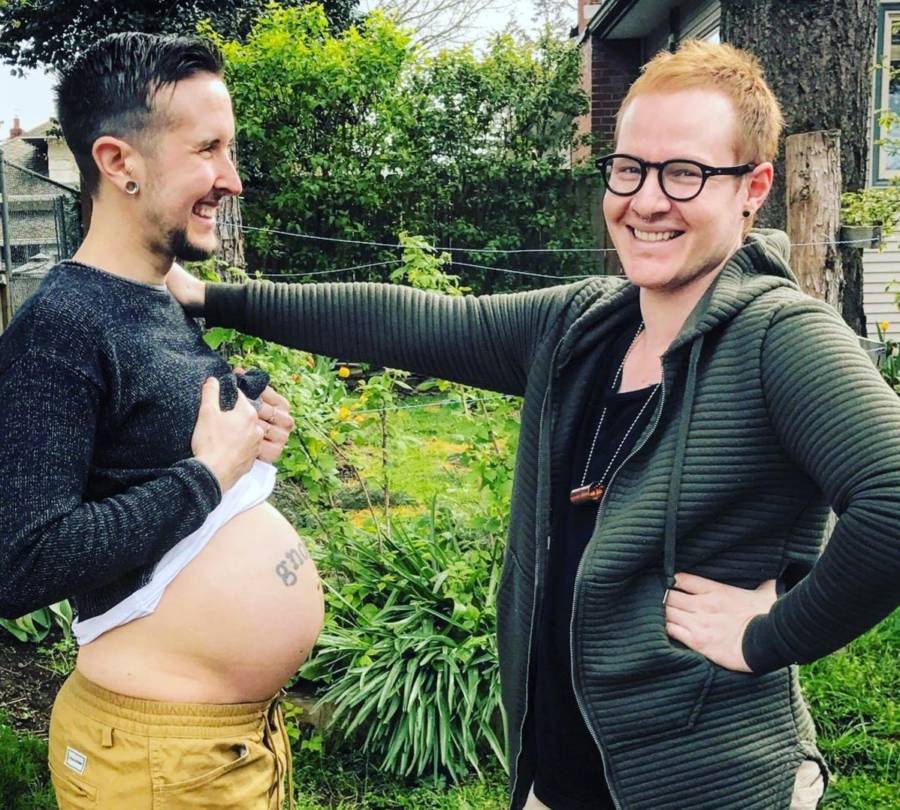 Trystan Reese expects strangers to do a double-take when they pass him on the street.

It makes sense, seeing as most people have never seen a pregnant man.

Reese, who is transgender, will welcome a baby this summer with his husband, Biff Chaplow. The Oregon couple, who already have two adopted children, have been very open and vocal about their journey — through their website and other outlets — in hopes of spreading awareness.

“I can feel someone looking at my face and searching for the remnants of womanhood,” Reese told The Longest Short Time podcast of strangers’ reactions. “They kind of squint their eyes a little bit and I can tell they’re trying to, like, take away my beard. They’re trying to transition me in their heads.”

It took the couple a while to get pregnant and they weren’t sure it would work. Reese had to stop taking testosterone for the first time in 10 years. While they experienced one miscarriage, the couple has since conceived and anticipates a healthy birth.

They’ve sometimes been anxious about how people might respond — even triple-checking that their clinic was prepared to treat a transgender patient — but they’ve mostly received an outpouring of support.

“There hasn’t been an ounce of transphobia from anyone I have come in contact with,” Reese said of his experience at the doctor’s office. “I expected to have to show extra ID, them to have to call their manager, all kinds of things and none of that happened. I went to go give blood at the phlebotomy lab, checking in with the person at the desk and she would type in my Medical Records ID and she be like ‘OK you’re here for the six weeks along blood test. oh six weeks along. Congratulations you look good.’

And I’m sitting there and I’m like ‘did you not notice that I am a man?'”

It took at least five email drafts before he told his mom.

“Congratulations, I know you’re going to be great dads,” she replied right away. “There’s no reason why only screwed up people should have kids.”

The couple’s two kids — whom they adopted while still in their 20s from a sister who suddenly could no longer care for them herself — have reacted differently to the news.

The son is happy about the baby, but nervous, they said, about classmates finding out his dad is pregnant. Hailey, their daughter, can’t stop talking about the news.

“She has told everybody in her class that her dad is transgender and is having a baby and she’s going to be a big sister,” Reese said. “So we’ve gotten to see it play out.”

Me and Hailey trying to feel baby kicks.

The reaction hasn’t been as positive on the Internet, where people have been quick to share harsh criticisms. While still conscious of his own safety and that of his family, Reese has decided to respond with humor.

The family recently found out that the baby will be a boy. “Diagnosis: male,” they joke.

Next, read about the World War II veteran who came out as trans at age 90. Then, learn about Trump’s reversal of the Executive branch’s former stance on trans rights.