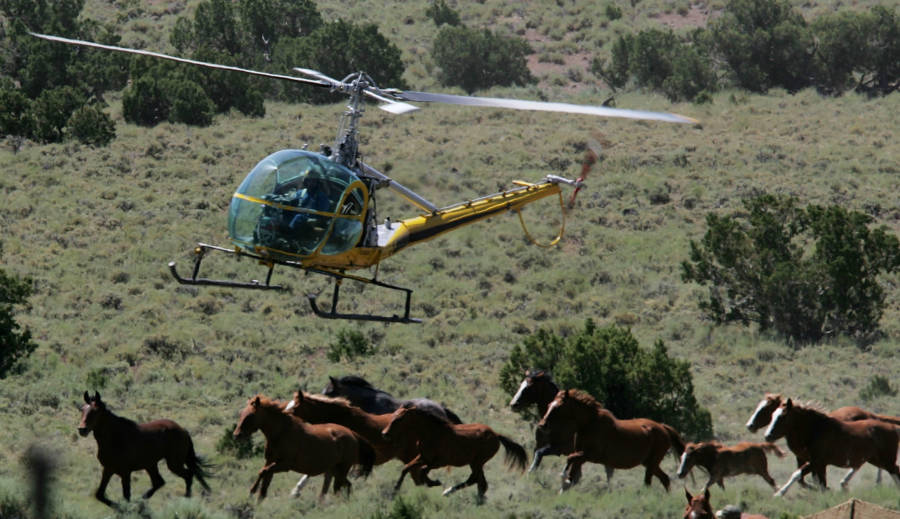 The Trump Administration’s proposed budget suggests that the government make some extra cash by selling wild horses without the current ban that prohibits buyers from then reselling the animals for slaughter.

Without this provision, horse advocates say, the animals will likely be sold by the tens of thousands to foreign slaughterhouses (horse slaughtering is illegal in the U.S.) to be processed as food.

“If approved, the new budget would result in the mass killing of tens of thousands of these federally protected animals,” the American Wild Horse Campaign wrote in a statement.

There are currently nearly 60,000 horses on the range in the West and an additional 45,000 being kept in government holding pens and on subsidized pastures. The Bureau of Land Management reports that the available rangeland can only support about 27,000 horses.

Taking care of these animals is set to cost the federal government $80.4 million in 2017 — a cost that the livestock lobby would like to see cut.

The only reason that the government hasn’t allowed the animals to be killed, the executive vice president of the Nevada Farm Bureau told CNBC, is the “emotional and anti-management interests who have built their business models on preventing rational and responsible actions while enhancing their fundraising through misinformation.”

In other words: horse lovers.

Trump’s horse-killing side of the argument is this: The wild horse population is out of control and reversing the anti-slaughter provision in the 1971 Free-Roaming Wild Horse and Burro Act is the easiest way to get rid of them.

“The original intent of the act was to make sure those animals had a healthy presence on the range, but also that they be kept at a number that is sustainable,” Ethan Lane, the executive director of the National Cattlemen’s public lands council, told CNBC. But now, he claimed, “you have horses starving to death… and irreversible damage to western rangelands.”

But the American Society for the Prevention of Cruelty to Animals thinks there are better ways to maintain the population, like horse birth control.

The executive director of the AWHC said that the new budget language could lead the country’s wild horse population close to extinction.

“America can’t be great if these national symbols of freedom are destroyed.”

Next, read about how giraffes are on their way to “silent extinction” due to American trophy hunting. Then, check out these 48 authentic photos of life in the Wild West.