Vegan Activist Covers Herself In Feces To Protest Trader Joe’s

Covering yourself with feces is definitely one way to get noticed when you're protesting for animal rights. 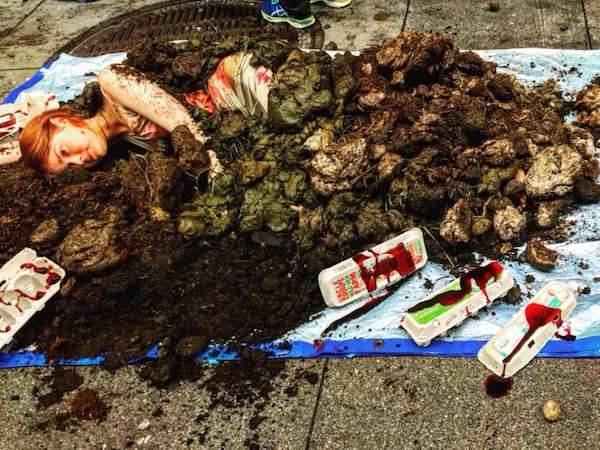 On March 22, 2018, Cassie King launched a solo protest outside a Trader Joe’s in the South of Market neighborhood of San Francisco. And her demonstration was attention-grabbing, to say the least.

King, who is a student at UC Berkeley, a vegan, and an animal activist, laid down outside the Trader Joe’s, covered in animal feces.

King was protesting the brutal living conditions of egg-laying chickens at a supplier farm in Michigan. King covered herself in animal feces because a recent investigation by the animal rights group Direct Action Everywhere found starving chickens living in cramped conditions amid heaps of their own waste.

The facility is one of Trader Joe’s supplier farms.

“The supposedly ‘humane’ eggs sold at Trader Joe’s come from birds who lived their entire lives in piles of waste,” King said, and added that deceiving labels “mislead consumers into paying for cruelty.”

“The most challenging things are often the most rewarding. If you only do what feels easy and comfortable, you miss out on the opportunity to grow as an activist and a person, to reach new heights, and to inspire others by your example.”

The group, which is based in the San Fransico bay area, has been known for their elaborate protests. Like the time they had a Thanksgiving turkey protest at Whole Foods and the time members were arrested at a restaurant during what started as a peaceful protest.

Meanwhile, this isn’t the first time Trader Joe’s has been accused of animal cruelty and for having a lack of transparency when it comes to their products.

Trader Joe’s is yet to issue a statement on Cassie King’s latest demonstration.

Found this interesting? Next read about the animal rights activist who was denied a passport for being too annoying. Then, take a look at thephoto of an animal rescue activist saving an orangutan from deforestation in Indonesia.