WWII Vet Takes A Knee In Support Of NFL Protest

“We don’t kill people. We want to make people live.” 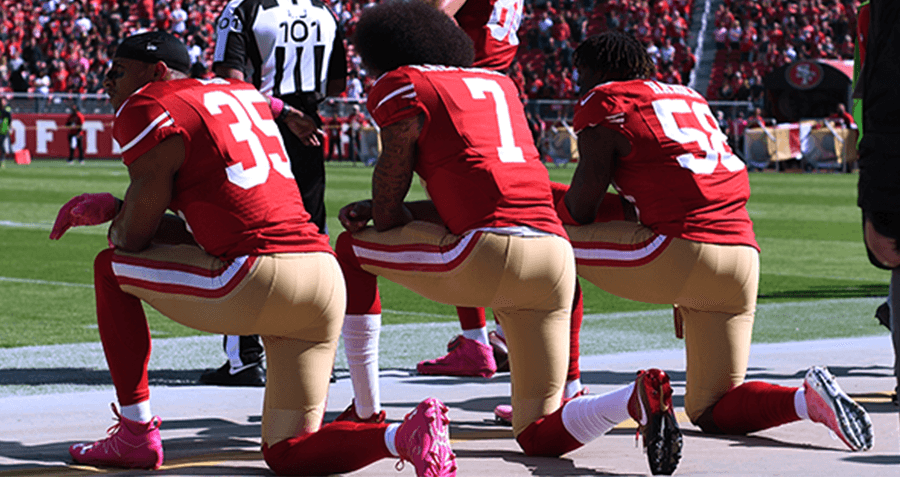 An unlikely supporter has joined the conversation on the NFL anthem protests, and has been shared over 100,000 times on Twitter.

In a photo posted Sunday morning, John Middlemas, a 97-year-old WWII vet from Missouri, took a knee while wearing his veteran’s cap, in support of the NFL protests.

His grandson, Brennon Gilmore posted the photo, and wrote along side it: “My grandpa is a 97-year-old WWII vet & Missouri farmer who wanted to join w/ those who #TakeaKnee: ‘those kids have every right to protest.'”

My grandpa is a 97 year-old WWII vet & Missouri farmer who wanted to join w/ those who #TakeaKnee: "those kids have every right to protest." pic.twitter.com/LurCj7SLUB

Middlemas told the local news that he took the picture to show “that you have to love everybody.”

“We don’t kill people, we want to make people live,” he added. And, as far as Trump is concerned, according to Middlemas he’s “garbage-mouthed.”

Even those who aren’t a fan of the sport have heard about the NFL protests.

In September of 2016, San Francisco 49ers’ quarterback Colin Kaepernick defied the age-old tradition of standing during the national anthem, opting to kneel instead. His quiet act of defiance suddenly polarized the nation, as numerous people took public stances to either support or condemn Kaepernick’s actions.

President Trump himself attacked Kaepernick, and this weekend called for a boycott of the entire NFL via twitter, saying they should “fire or suspend” anyone who didn’t stand for the national anthem. He added that NFL ratings and game attendances are “way down,” attributing it to the player’s disrespect.

If NFL fans refuse to go to games until players stop disrespecting our Flag & Country, you will see change take place fast. Fire or suspend!

…NFL attendance and ratings are WAY DOWN. Boring games yes, but many stay away because they love our country. League should back U.S.

Then, before Sunday’s games, virtually every single player locked arms and knelt.

Each of 28 teams that played yesterday decided to kneel separately, but their collective action showed just how united the mentality is.

“There is no greater unifier in this country than sports and, unfortunately, nothing more divisive than politics,” Kraft wrote in the statement, released Sunday morning. “I think our political leaders could learn a lot from the lessons of teamwork and the importance of working together toward a common goal.”

At a Friday night rally in Alabama, President Trump told NFL coaches to get the “son of a bitch” players off of the field if they continued to kneel. However, none of the league’s team owners agreed with him. Of the 32 owners, 28 of them publicly denounced Trump and expressed support for their players. Four of them declined to comment.

Enjoyed this? Read about the man who found a 550-pound unexploded WWII bomb. Then, read about how over half of Americans say they’d be fine with Trump postponing the 2020 election.