There’s Way More Water On The Moon Than We Thought, New Study Shows

Ancient volcanic eruptions left a hidden wealth of water beneath the lunar surface, according to new research. 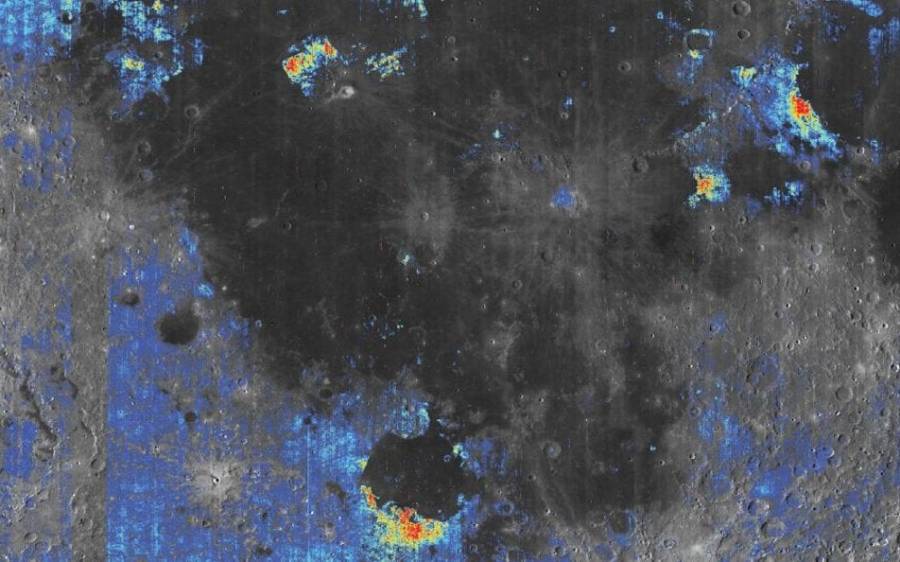 While many of us are surely aware that NASA announced the conclusive discovery of water on the moon back in 2009, few of us are likely aware of just how little water was actually found: just 32 ounces per ton of the moon’s surface.

Now, however, a new study from Brown University suggests that the moon may actually contain far more water than that, and not just on its surface.

“The bulk interior of the moon is wet,” conclude the researchers in a news release shared along with their study, published in Nature Geoscience online today.

The researchers, led by Brown’s Ralph Milliken, arrived at this breakthrough by analyzing satellite data collected by India’s Chandrayaan-1 lunar probe, launched in 2008. In the years between then and now, evidence of water inside the moon’s minerals was undetectable due to interference from heat radiation. However, the new study’s computer models have removed the radiation from the data to reveal the water that was there all along.

That water got there thanks to ancient volcanic eruptions that scattered ash and rock across the lunar surface. And inside the ash and rock are small amounts, little “glass beads,” of water.

Although water is only present in these volcanic deposits at several hundred parts per million, the deposits cover vast swathes of the moon as large as several thousand kilometers wide and several kilometers deep.

Now, tracing things back even further, the study’s researchers still aren’t sure where this water came from in the first place. However, the new findings could bolster the theory that the moon itself was created by the debris of a collision between Earth and some unidentified planet-sized object, which would mean that any water on the moon was water from Earth that was left on the moon during the collision.

But just as the new findings may unlock mysteries of the past, so may they too unlock the potential of the future. The researchers appear to be wondering if the evidence of significant water on the moon might mean that we should send astronauts there in order to see if the water can be extracted and harvested.

And that might not be all. “If we want to send people to Mars, you might consider using the moon as a stepping stone for training or testing equipment,” Milliken said. “If you do that you’ll need water. It’s heavy and expensive to lift off earth.”

If we can in fact harvest the water on the moon, it will indeed only make it that much easier to finally explore what lies beyond.

Next, see why exactly so many people think that the moon landing was faked. Then, learn how the government mistakenly let Neil Armstrong’s bag of moon dust go to a private citizen, who just auctioned it off for $1.8 million.