Controversy erupted last week in Aloha, Oregon after a high school teacher handed out a “White Privilege Survey” as a homework assignment.

The 13-question survey asked students to take stock how often their own race allows them to do things like “be in the company of people of my race most of the time” and “count on my skin color not to work against the appearance of financial reliability.” See the full survey below: 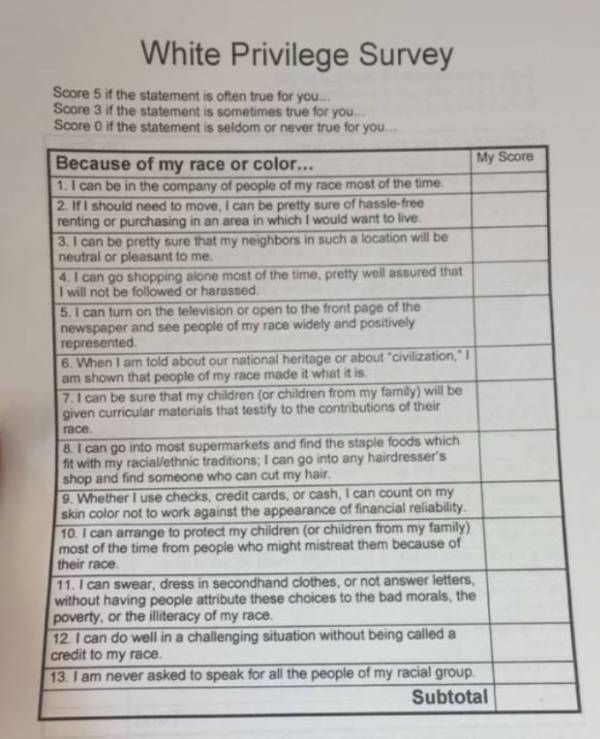 The survey (based on a 1988 essay by activist and educator Peggy McIntosh entitled “White Privilege: Unpacking the Invisible Knapsack”) quickly ignited heated discussion.

On the one hand, parents like Jason Schmidt, whose son was given the survey claim that material like this has no place in the classroom. “I think he should be learning actual education and not be a part of some social experiment or some teacher’s political agenda,” Schmidt told local KATU News.

“With the amount of money we pay for schools, they should be educating not indoctrinating our students about the latest political fad or political agenda a teacher wants to get across.”

However, proponents of the survey like local parent Sarah Rios-Lopez argue that high schoolers need to be aware of the role that race plays in American society. “I want [my daughter] to have opinions. Whether it’s for or against, you have to create those, but you can’t without good information so I applaud teachers getting out that information,” Rios-Lopez told KATU.

“We are first of all judged by the color of our skin, because that is what you see first. It’s a huge topic and it needs to start somewhere. If it doesn’t start now, its not going to start.”

With parents like Rios-Lopez and Schmidt battling it out, the school itself has stuck to its guns.

Beaverton School District spokeswoman Maureen Wheeler told KGW news that the class in question covers issues of race (and of class, sexuality, and religion) with a goal of allowing students to “gain empathy, understanding and to build bridges…The survey is just one activity that engages students in exploring this area.”

Next, read about the public university that recently came under fire for offering a “stop white people” course.