Woman Blew Nose So Hard She Fractured Her Face

A woman experienced intense pain, lost vision, and fractured her eye-socket simply by blowing her nose at work. 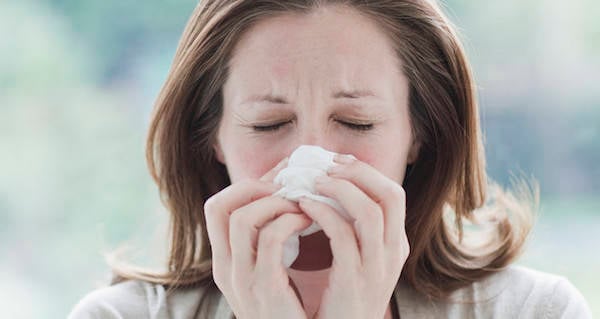 How did a 36-year-old woman in England wind up in the hospital with a fractured face that gave her blurred vision and caused her eye socket to rupture?

The answer isn’t a fist-fight. According to a report published in the journal BMJ Case Reports, it was because she blew her nose too hard.

Last year the woman was at work when she blew her nose, but the force from the blow resulted in orbital emphysema or “orbital blowout” – a condition in which air is injected into soft tissue spaces and gets trapped. The orbit refers to the hole in the skull that encompasses the eye.

Immediately after blowing her nose, the patient temporarily lost vision in both eyes. Then, around two hours later, her left eye started to swell and she began bleeding from her left nostril. That was followed by extreme pain on the left side of her head and neck.

After being taken to London’s North Middlesex University Hospital, the woman underwent a CT scan which showed a fracture in her left eye socket. It also showed that the bone surrounding her eye had broken.

The woman told doctors that she hadn’t blown her nose particularly hard and didn’t have any underlying health problems that she knew of.

Orbital blowout fractures are almost always caused by acute trauma. The bone, known as lamina papyracea, is very thin. So blunt-force trauma injuries, like being hit in the face with a baseball or getting punched, can easily cause bruising or swelling around the eye.

“I’ve never, ever heard of it ever happening from someone blowing their nose. Everyone blows their nose. They don’t think they can blow out their eye,” Dr. Sam Myers, the study’s lead author who treated the woman, told Time.

Myers also said that the woman “must have had a predisposition or a weakening in the skeletal area around the eye,” since non-traumatic cases such as this are rare occurrences. She also reportedly smoked about 20 cigarettes a day, which may have played a role.

According to physicians, the fracture was a clean break and relatively easy to treat. She was prescribed painkillers and didn’t need surgery, as most cases resolve on their own.

Now a year later, the patient has reportedly recovered for the most part, with her vision returning to normal. She does still experience a side effect though: pain on the left side of her face for about 30 minutes to a few hours each day.

Though Myers made it clear that nose-blowing isn’t a common risk for orbital blowout, he did say, “I’ve blown my nose a bit less since then.”