Her niece not only claimed that veganism cured her, but blames her death on the fact that she consumed meat. 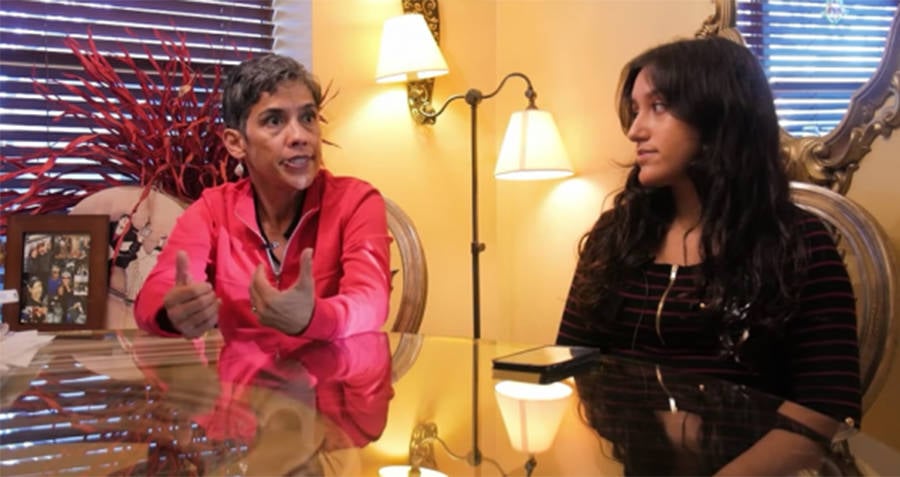 YouTubeLopez and Johnson discussing the benefits of veganism in one of their YouTube videos.

A YouTube star who claimed online that her vegan lifestyle cured her cancer, has died of cancer.

YouTube vlogger Mari Lopez, who touted her beliefs that raw veganism, juicing and faith in God cured her stage four breast cancer, succumbed to her illness in December after it spread to her liver, blood, and lungs.

Lopez, one half of the vlogging duo Mari & Liz, gained notoriety after she and her niece Liz Johnson claimed that faith in God and a vegan lifestyle was curing her cancer.

The duo’s videos on their YouTube channel, which has roughly 11,000 subscribers, detail how Lopez chose to forgo traditional medical treatment for her stage four breast cancer, and adopt a vegan lifestyle instead. In one of the videos, Lopez underwent a 90-day juice cleanse, which she said healed her, despite giving her flu-like symptoms.

In another video, she revealed that her doctors had recommended cancer treatment, but that she felt her diet and lifestyle were better equipped to help her.

“It’s my choice, I’ve been okay, I haven’t died, I haven’t gotten to the hospital… I am going to continue on this path of going natural,” Lopez said. “It’s over, it is done with, I am healed. I feel it in my spirit and in my body.”

In another video, Lopez claimed that God drew her to the most healing fruits and vegetables in the grocery store, which is how she knew which ones would heal her. She also spurred controversy with one of her videos, which claimed that in addition to curing her cancer, her vegan diet and renewed faith turned her straight.

“I was healed by God and faith and used to live a gay lifestyle,” she said in one video.

Johnson believes that Lopez’s reliance on a vegan diet was so important to her healing, that the reintroduction of meat is actually what killed her. Shortly before her death, Lopez had been living with family members who were “not familiar” with her vegan lifestyle.

“My family is not familiar with that style of living… What happened was, as Mari was living with my mom, my mom started to tell her that she needed to eat meat now,” Johnson said.

In addition to eating meat, Johnson said that the use of a microwave also contributed to her aunt’s death.

“My aunt was very against the microwave because of cancer-causing issues with that, and my mom would cook her things using the microwave,” Johnson said.

According to the American Cancer Society, microwaves pose no health risk when used properly.

Johnson’s firm stance against a carnivorous diet and use of the microwave, though shared by Lopez at the beginning of her journey, were apparently no longer aligning with her aunt’s toward the end of her life. According to Johnson, Lopez asked her to remove all videos claiming that veganism cured cancer when she realized that cancer might win.

Johnson refused, as she still holds true to her beliefs.

“She didn’t want anybody listening to her, which I understood because I knew that she was depressed,” Johnson said. “She was upset because her cancer had come back. I can understand how maybe she didn’t want to give people false hope. I had to pray a lot about it, because I could feel her pain. But in my own relationship with God, I knew it could still help people, it could still make a difference in people’s lives, it could still give hope.”

Though Lopez is gone, Johnson plans to continue making her videos and spreading the word about the healing powers of faith and veganism.

Next, read about the young boy who died after his parents chose to pray over him instead of taking him to the doctor. Then, check out these British scientists who might have cured HIV.