Genius Gets Tattoo On Her Eyeball, Which She Might Now Lose

“I took my eyesight for granted and trusted someone I shouldn’t have.” 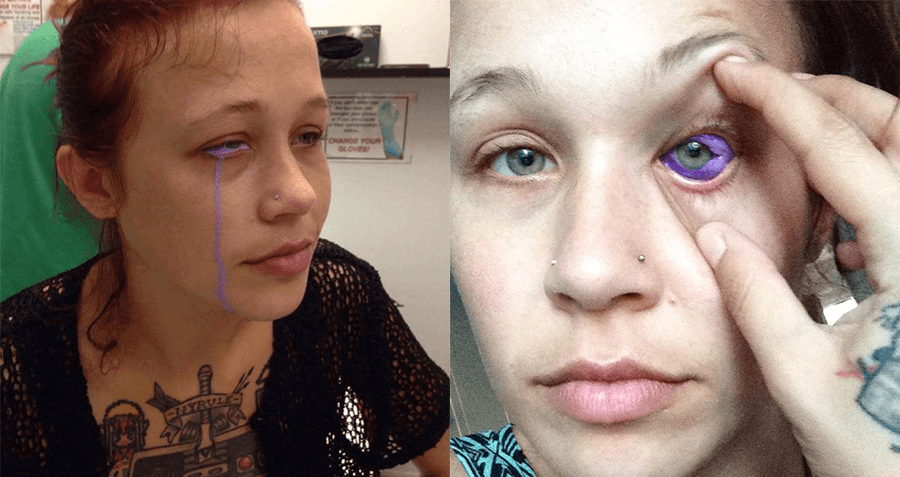 A Canadian woman is spreading the news about tattoo awareness after getting a risky eyeball tattoo that may now leave her partially blind.

Catt Gallinger, of Ottawa Canada, went in for a “scleral tattoo” on September 5. According to her, immediately after the tattoo was finished, purple dye began streaming from her eye. The next day, it was swollen shut, and now, she says, she can barely even see out of it.

“I took my eyesight for granted and trusted someone I shouldn’t have,” she said in a video posted Monday. “And even if this heals, my eyesight is not going to be back.”

Though the tattoo may seem insane to some, the Gallinger says she knows many people who have tattooed scleras, who never experienced any issues. She believes that the person who gave her the tattoo was unqualified, adding that she felt pressured into doing it.

She also believes that the tattoo artist used the wrong needle, which pushed the dye too deep into her eye, resulting in the damage.

“During the first two weeks, he kept telling me it was fine, but I had a feeling that it wasn’t normal,” she said.

Gallinger claims that the tattoo caused a “hemmorhage and sclera tearing,” resulting in several trips to the hospital.

Unfortunately, there isn’t much doctors can do for her.

“You can’t laser it away like you can on your skin,” Dr. Setareh Ziai, an assistant professor of ophthalmology at the University of Ottawa Eye Institute told Global News. “No physician in their right mind would ever recommend this to anyone.”

Gallinger, who also has a forked tongue, and multiple other piercings and tattoos, says she is accepting the fact that she may never get her vision back, but is thankful that she will almost certainly be able to keep her eye.

Now, she’s hoping to spread awareness about the dangers of getting sclera tattoos from unqualified people.

“Just please be cautious who you get your mods from and do your research,” she posted on Facebook. “I don’t want this to happen to anyone else.”

Next, check out these amazing photos of vintage tattoos. Then read about Maud Wagner, the first female tattoo artist.