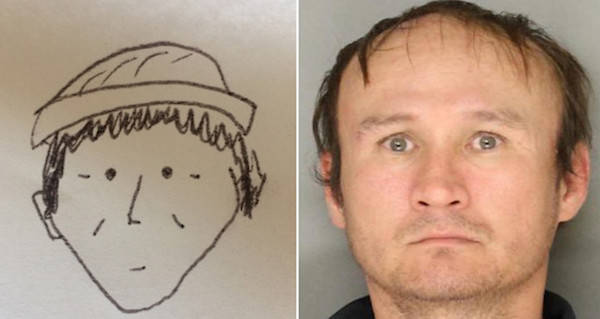 A picture’s worth a thousand words. Or in this case, a suspected thief.

Authorities in Lancaster, Pa. were able to identity a man accused of stealing cash from a market stand after they released a witness’ hand-drawn police sketch.

The sketch, which was posted to the Lancaster Police Department’s Facebook page, immediately garnered attention and mockery because of its less than stellar details. Social media users dubbed it the world’s worst police sketch and were quick to share, comment,and photoshop pictures of friends’ faces onto the sketch.

But it was the witness who got the last laugh, as the sketch, along with descriptive details, was able to jog the memories of several cops. They then issued a search warrant for the suspect, Hung Phuoc Nguyen.

The details provided by the police stated he was 5’4” between 30 and 40 years old, believed to be of South American or Asian decent, with black hair and wide cheekbones.

The incident occurred on Jan. 30, 2018, when a male suspect posed as an employee at a vendor stand while the actual employee had stepped away The suspect stole an undisclosed amount of cash and ran.

Nguyen was charged on Feb. 7, 2018 with two counts of theft by unlawful taking.

Though the comedic sketch went a bit viral, officials maintain it wasn’t released with that intent. They said in a statement, “We released all of those details together in our police log in the hope that someone recognizes the suspect.”

Still, the use of the words “amateurish and cartoonish” in recounting the case on the Lancaster Bureau of Police’s official crime watch site, which states that “while the sketch provided by the witness may have appeared to be a bit vague, it, along with the distinctive physical descriptors, jogged the memory of at least one investigator to provide a potential suspect name,” only seems to further highlight the sketch’s amusing aspect.

Clearly the witness is a proponent of the minimalism art movement, which has a core principle of “exposing the essence of a subject by eliminating all non-essential forms, features or concept.” In other words, Less is more.

Nguyen could not be located at his last known address and it is reported that he is currently homeless. Anyone with information on his current location is advised to contact the police, and may remain anonymous, as is the Picasso who drew the sketch.

Next, check out the 10-year-old who led police on 100-mph chase for 45 miles, then read about the robber who interviewed for a job at a police station where he was wanted for a crime.