About 10% of the city's residents will need to be cleared out. 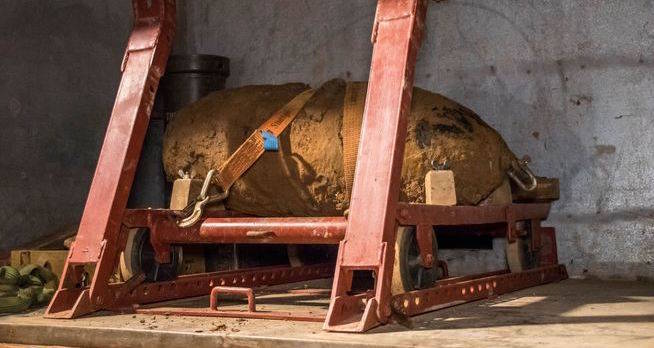 World War II left so many unexploded bombs across Europe that they’re still being uncovered on a fairly regular basis.

One such bomb has been found in Frankfurt, Germany, and it’s a monster 4,000-pound British ordinance that possibly contains 3,080 of explosives, according to Deutsche Welle. The Brits simply knew it as HC 4000, but the Germans called it the “Wohnblockknacker,” or “blockbuster,” for its ability to destroy entire city blocks. This one, however, was a total dud.

The bomb was discovered by construction workers at a site in the Wismarer Strasse area of Frankfurt less than a mile away from the prestigious Goethe University. They immediately notified authorities who have started preparations to safely remove it.

As part of the effort, officials are evacuating everyone within a one-mile radius of the site. That means 70,000 residents of Frankfurt in the Westend district of the city center will have to be evacuated while the bomb is excavated, disarmed, and removed from the site. That’s roughly 10% of the entire city.

Among those who will be evacuated are the students and faculty of the school, patients and doctors at two major hospitals, and employees at the German Federal Bank. It is unclear whether the evacuation will impact the nearby international airport.

This is not the first time that a major German city has had a mass evacuation due the discovery of an unexploded WWII bomb. On Christmas Day 2016, 54,000 residents of Augsburg were evacuated while authorities cleared another 4,000-pounder.

Other countries face this problem as well. Four hundred people in the municipality of Duplek in northern Slovenia had to be evacuated after a man in the village found a 550-pound unexploded bomb and decided to bring it home with him.

Next, read about the 500-pound WWII bomb discovered under a Greek gas station. Then, check out this story of a Baghdad man who played his cello at the site of a devastating bombing immediately after it happened.