"This specimen perfectly illustrates the cooperative evolution of plants and animals during this time period." 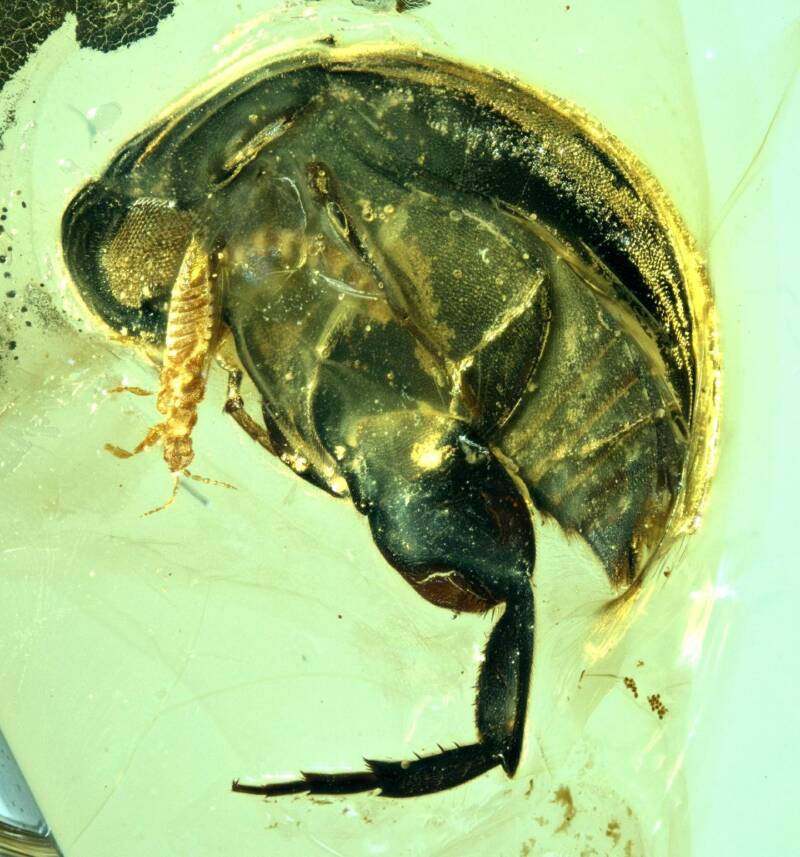 While the significance of pollination — and pollinating insects — has become common knowledge, scientists have long struggled to estimate when the phenomenon of pollination first began on Earth. A popular guess used to be about 49 million years ago.

But scientists have found recent evidence that suggests pollination of plants on Earth began much earlier than that. According to Science Magazine, an international team of researchers from China and the United States uncovered a prehistoric beetle specimen trapped inside amber, and on that specimen were tiny specs of pollen.

Details of the team’s findings are described in a study published in the journal Proceedings of the National Academy of Sciences.

Finding traces of pollen on a 99-million-year-old insect might not sound like such a big deal. But the discovery is a huge revelation for scientists, pushing back the estimated date of early insect pollination on Earth by at least 50 million years earlier than what was previously thought.

Not to mention the fact that a fossilized specimen inside amber with pollen still stuck on its body is an unusual find.

“It’s exceedingly rare to find a specimen where both the insect and the pollen are preserved in a single fossil,” said David Dilcher, the study’s co-author. 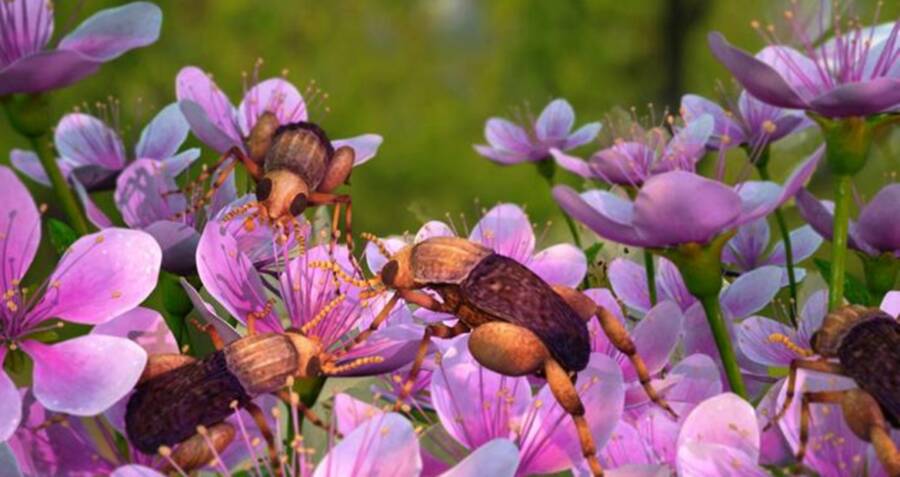 First dug up in northern Myanmar by scientists in 2012, the beetle specimen is a newly discovered species called Angimordella burmitina and is related to a modern species of flower-loving beetles.

The species has a peculiar shape unlike the beetles we see today. In addition to being tiny — the specimen measures about four millimeters long — the A. burmitina has a curved-shaped body and head, which likely enabled it to reach deep into the flowers and feed on the sweet nectar.

The A. burmitina is also covered in fine hairs and has appendages near its mouth that carried and distributed pollen wherever it went, just like its modern-day relatives.

Researchers, led by Wang Bo from the Nanjing Institute of Geology and Palaeontology of the Chinese Academy of Sciences, used various high-tech tools to examine the tiny bug and the 62 grains of pollen that covered the beetle’s legs, abdomen, and thorax.

The team used optical microscopy, confocal laser scanning microscopy, and X-ray microcomputed tomography to reveal the micro details of the beetle and pollen. While researchers found it difficult to determine the exact plant from which the pollen came from, they believe the flower grains came from flowering plants of the eudicot group, which include many modern-day species of trees.

According to Dilcher, the pollen’s size, clumping, and “ornamentation” suggest the plant that produced the pollen found on the beetle evolved so that it could be dispersed through contact with insects. 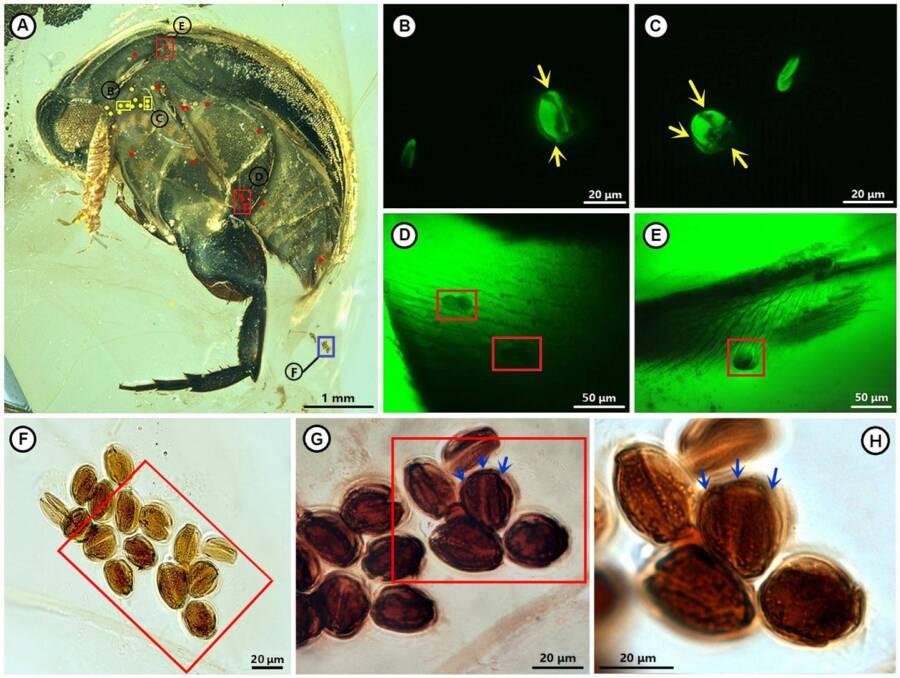 David Dilcher et alMicro scans of the tiny beetle and the grains of pollen found on its body.

“This is the earliest direct evidence of insect pollination of angiosperms,” the study noted, referring to the breed of plants that produce flowers and pollen. Angiosperms originated roughly 250 million years ago, and they are the most diverse group of land plants with 300,000 known species.

Ancient fossils in Burmese amber have been a crucial tool for scientists to unlock the mysteries of our Earth’s past.

Before the discovery, many scholars since Darwin — who called the rapid radiation experienced by angiosperms during the mid-Cretaceous time an “abominable mystery” — believed that insect pollination was likely the culprit behind the rapid radiation period, since insects and flowering plants both existed at the time.

But without concrete evidence, this theory remained a mere idea — until now.

Now that you’ve learned about the prehistoric pollen-covered beetle, check out this ancient millipede fossilized in Burmese amber for 99 million years. Then, take a look at these gorgeous 100-million-year-old flowers that were also perfectly preserved in amber.