A look inside how punk music emerged from the depths of 1970s and 1980s New York City in twenty-seven candid photographs.

In the mid-1970s, a new incarnation of rock emerged in juxtaposition to the opulent and carnival-like music that had dominated the decade so far. It was punk rock, a music fast on pace and low on instrumentation with an anti-authoritarian ethos at its core.

Punk’s geographical center could be found in New York City neighborhoods like the Lower East Side and the Bowery, which white flight and deindustrialization had left for dead.

While today high-end shopping and dining eat away at whatever remains of punk’s memory in those neighborhoods, we look back at the early days when punk emerged from the depths of 1970s and 1980s New York City: 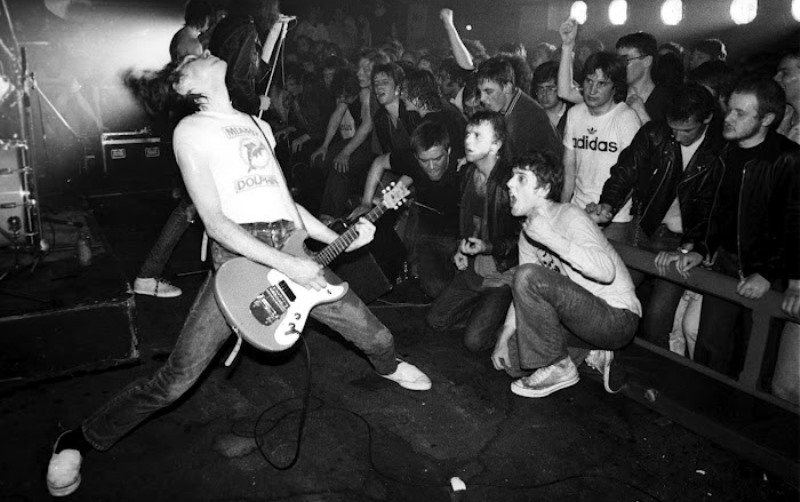 At center stage of the burgeoning punk movement was the Ramones, a New York band that is cited as the first group to embody the punk sound. Formed in 1974, the Ramones sought a return to a simpler form of rock, one that stood in contrast to the era's heavily-produced arena rock.Wikimedia Commons 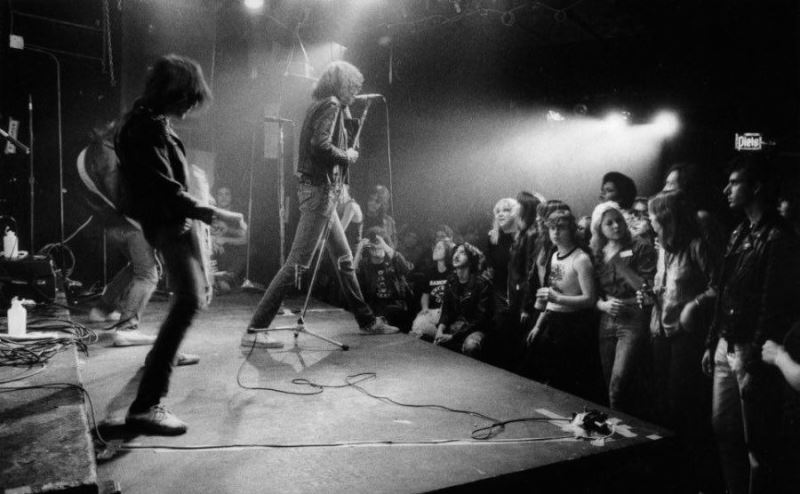 The Ramones were known for their minimal fashion, manic tempo, and loud, straightforward sound. As described by the Trouser Press, "New York's Ramones blasted open the clogged arteries of mid-'70s rock, reanimating the music. Their genius was to recapture the short/simple aesthetic from which pop had strayed, adding a caustic sense of trash-culture humor and minimalist rhythm guitar sound."David Godlis 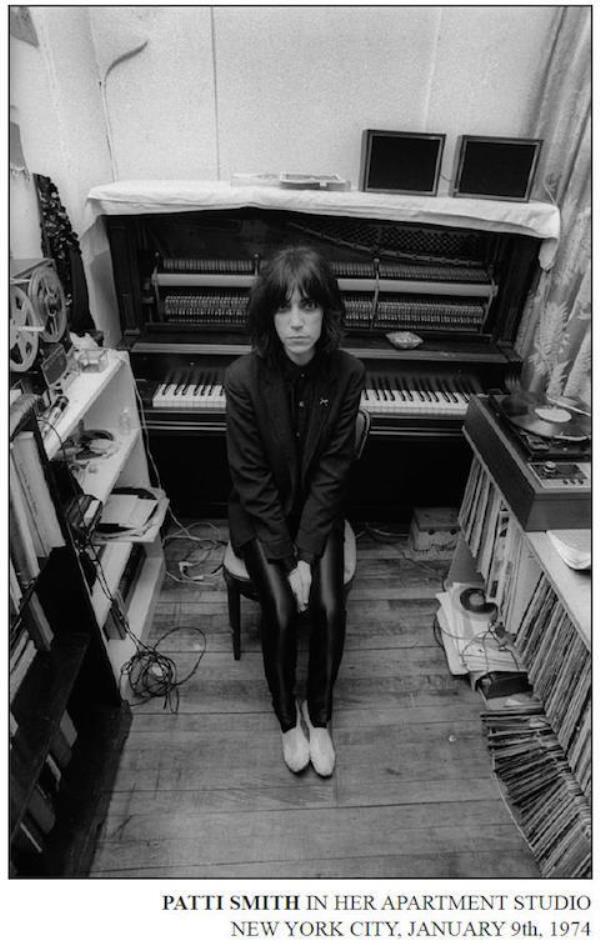 In the early 1970s, strands of punk music sprang out of Mercer Arts Center members. Patti Smith, a highly regarded poet and feminist that came from the Mercers Art Center, recorded the single "Hey Joe"/"Piss Factory" in 1975, one of the first recognizable punk songs.Allan Tannenbaum / Artnet 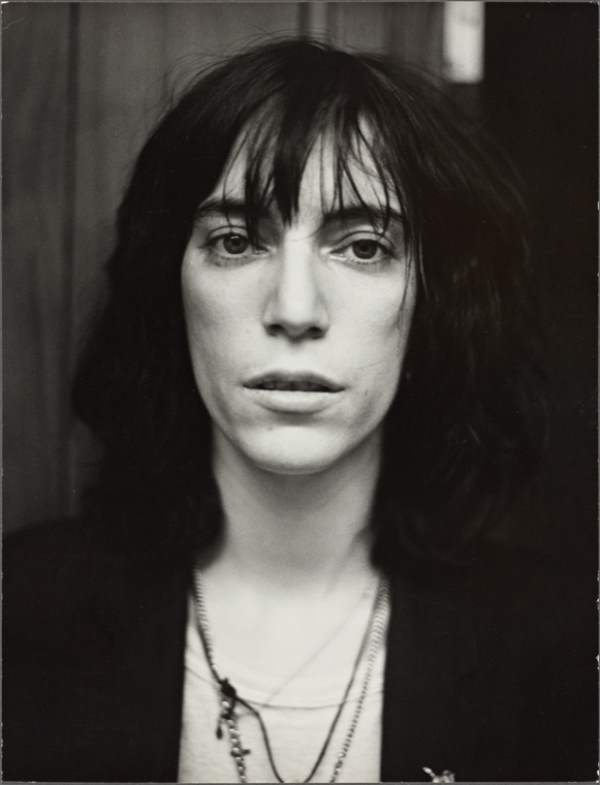 Patti Smith, like other early punk artists, fused together different types of music into her own version of punk, including jazz, spoken word, and garage rock. As with other artists, Smith's used her music to reject prevailing norms and power structures.New York Public Library 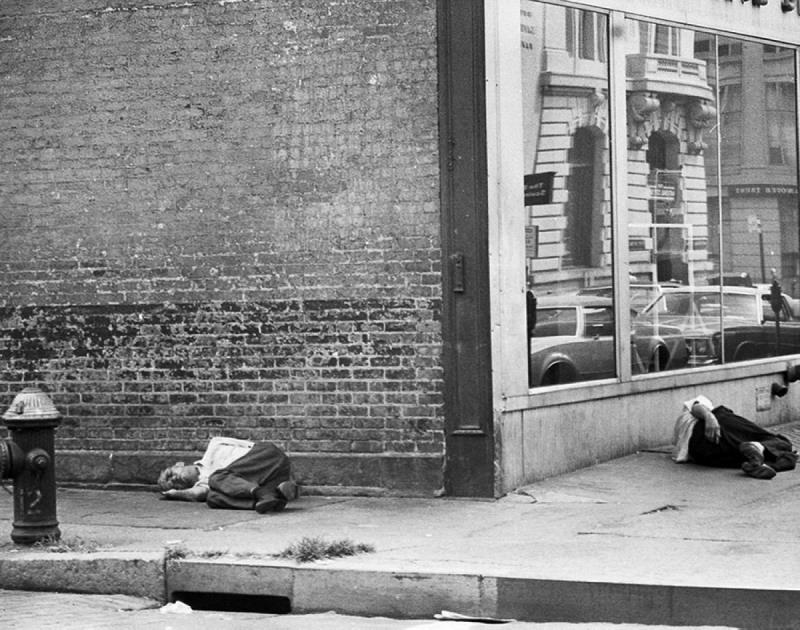 The Bowery was home to some of the worst poverty and crime in New York. Its destitution and underuse made it ripe for creative and social use. In the coming years, the neighborhood emerged as the heart of New York's punk scene.Leland Bobbé / Photographer 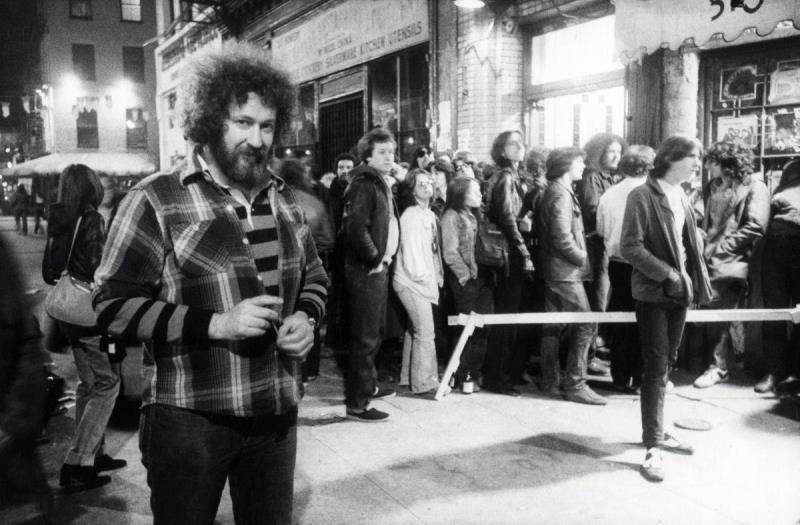 In 1973, Hilly Crystal opened CBGB in the Bowery. In the above, he poses for a photograph outside of the club before a show.David Godlis 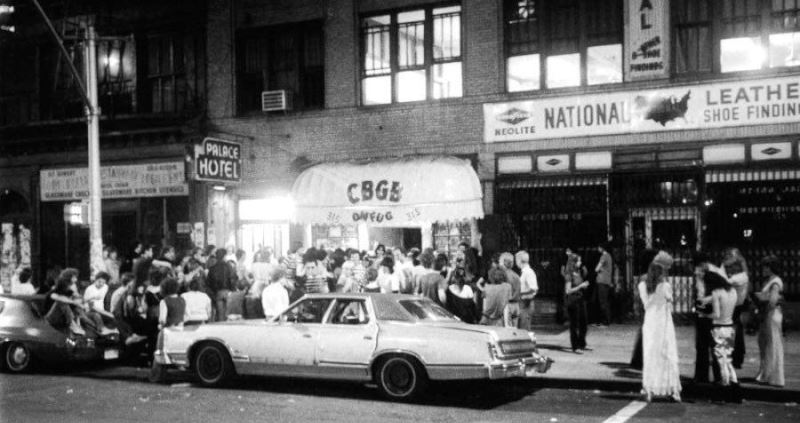 Originally called CBGB & OMFUG (standing for "Country, Bluegrass, Blues and Other Music For Uplifting Gormandizers"), the club became the iconic venue for punk and new wave across the globe.New York Historical Society 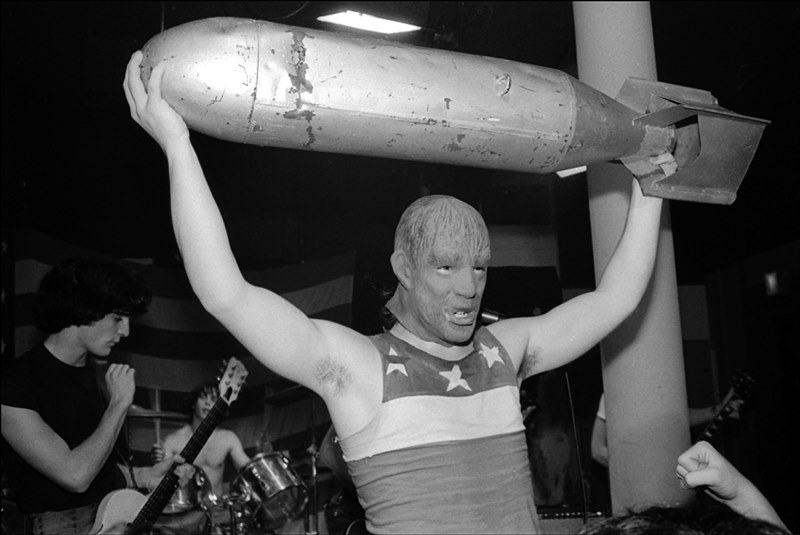 Another staple of the nascent punk culture was the Mudd Club, a TriBeCa venue opened in 1978. In the photo above, the lead singer of a band lifts a papier-mâché bomb over his head during a November 1978 performance.Allan Tannenbaum / Getty Images 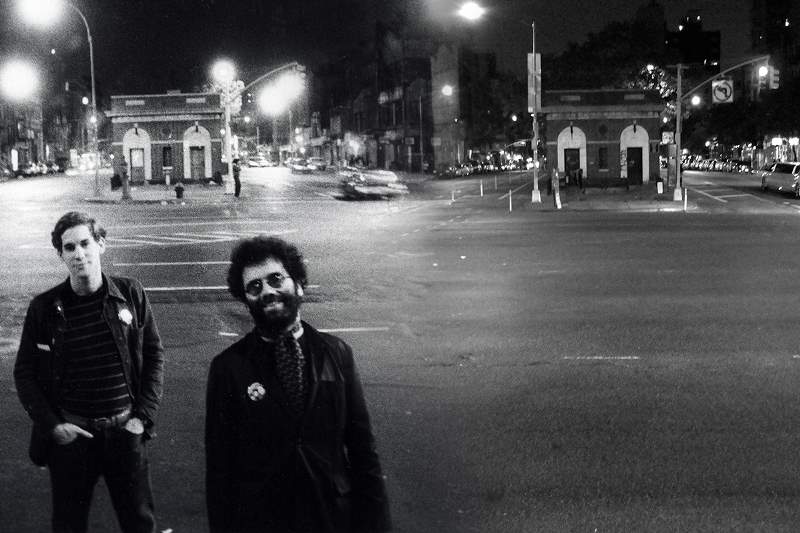 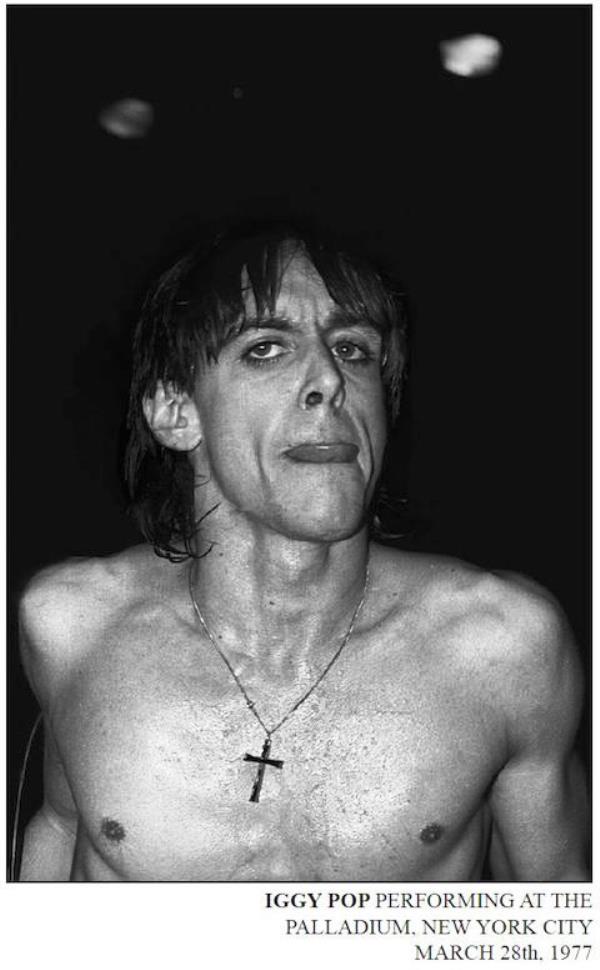 Iggy Pop, who was at the time launching a solo career after the disbanding of The Stooges, became a fixture of the developing punk scene that would strongly influence his performance style in the subsequent decades.Allan Tannenbaum / Artnet 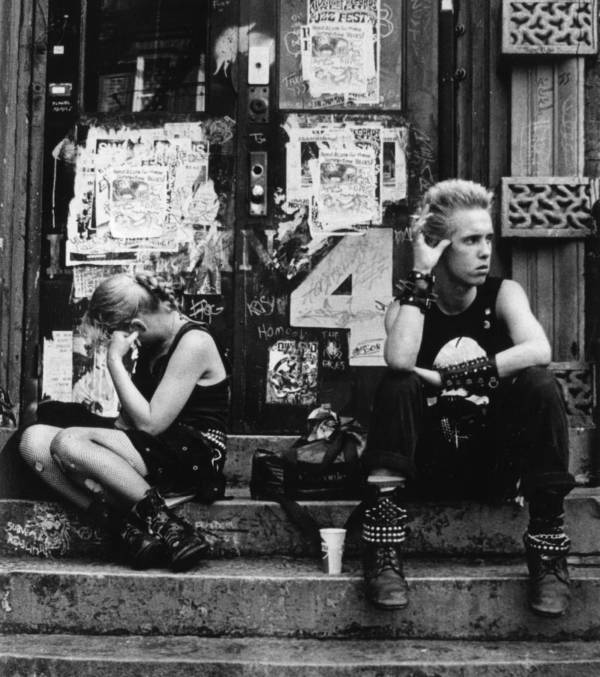 A couple enjoys an East Village stoop during the summer of 1985.The New York Historical Society

CBGB attracted an array of visitors, reflecting the range of acts that frequented the venue. In the image above, a couple hangs out behind CBGB following a show in May 1978.Allan Tannenbaum / Getty Images 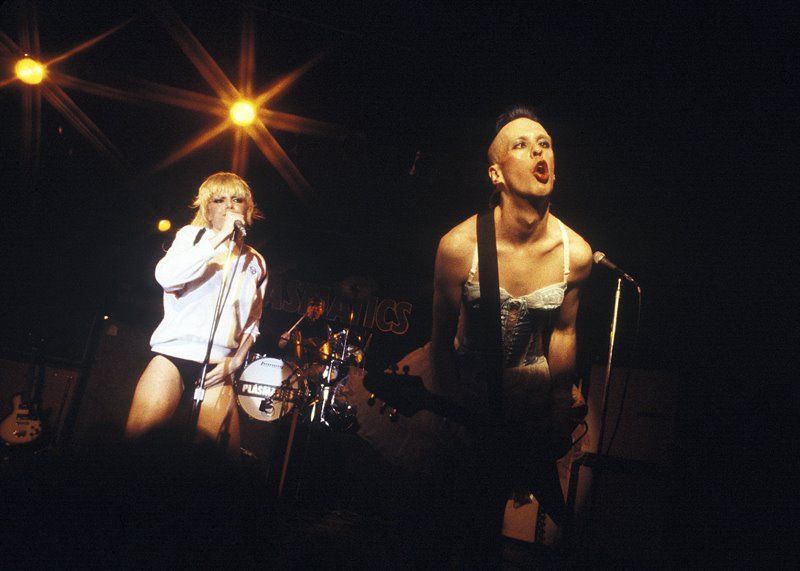 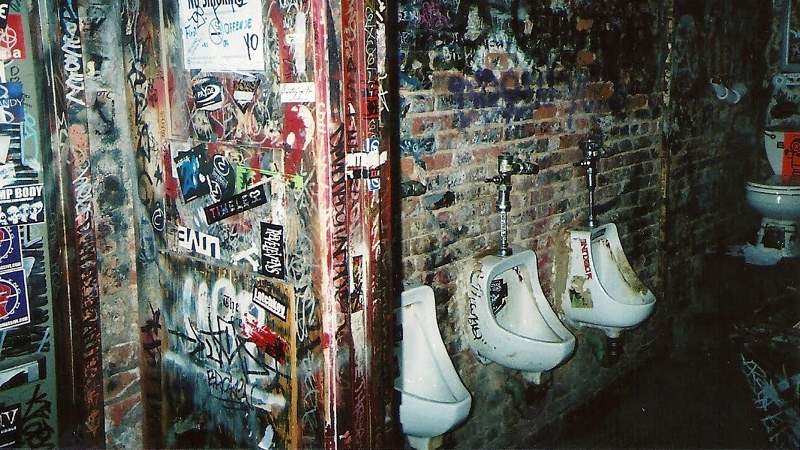 One of the most celebrated aspects of CBGB was its notorious bathrooms that featured decades of accumulated graffiti. Described by Talking Heads frontman David Byrne as "legendarily nasty," the Metropolitan Museum of Art recreated the bathroom as the centerpiece of an exhibit on punk culture in 2013.Wikimedia Commons 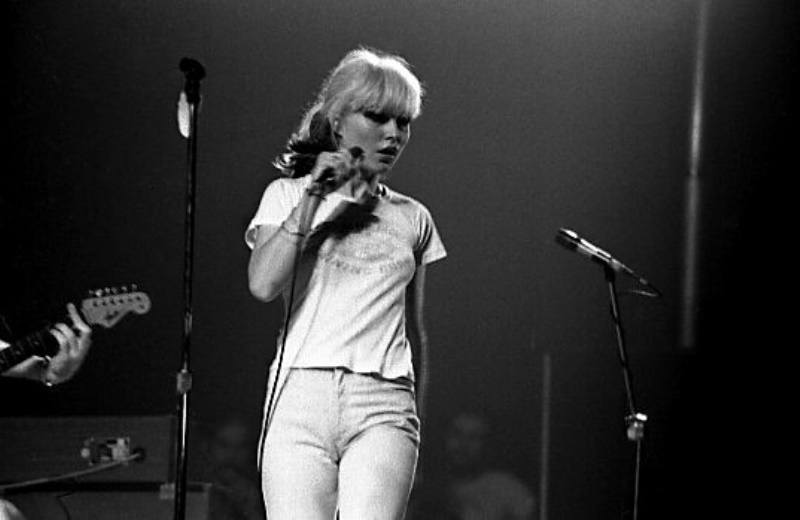 After the first wave of artists in the mid-1970s, at the end of the decade punk diversified into new distinct sub-genres. New Wave stood at one end of the spectrum, where groups like Blondie used a wider range of instruments and had a more pop-friendly sound.Wikimedia Commons 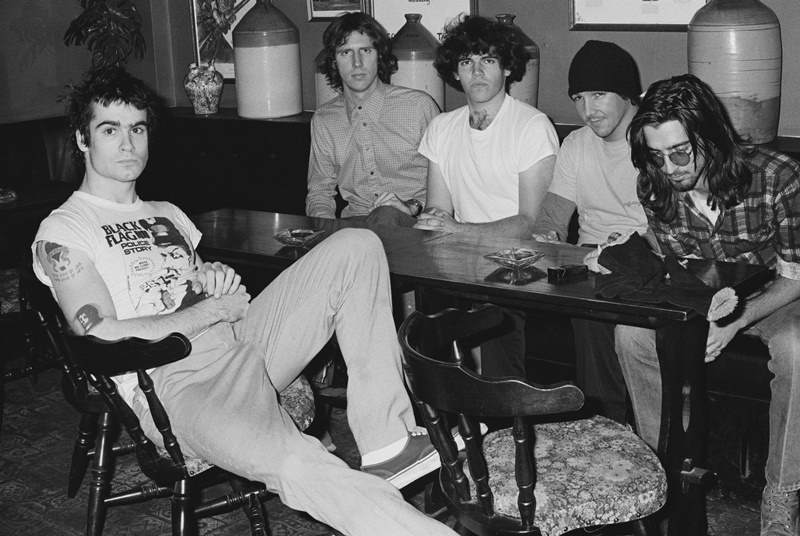 Hardcore punk — pioneered by bands like Black Flag and the Dead Kennedy's — stood on the other end. They played in a faster and more aggressive style than their predecessors. Erica Echenberg / Getty Images 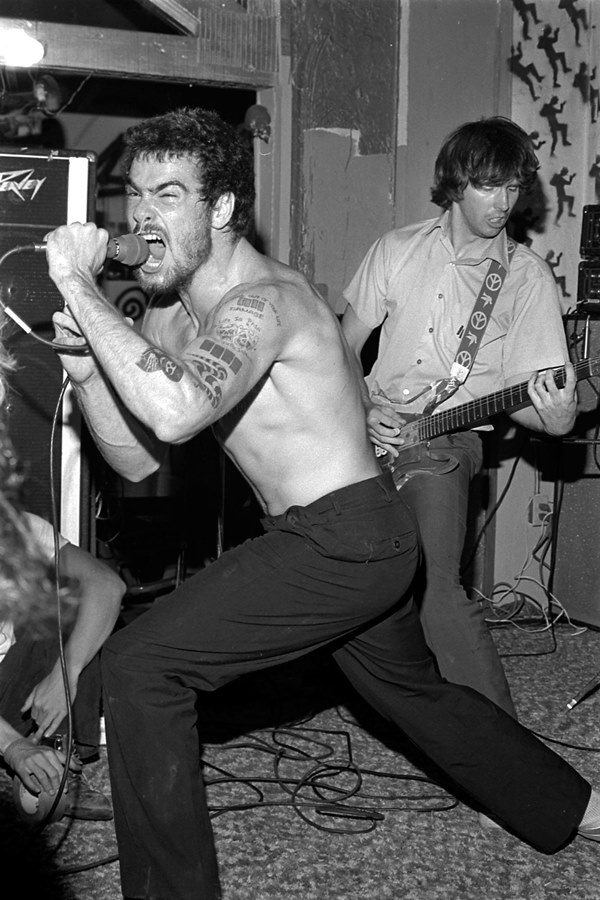 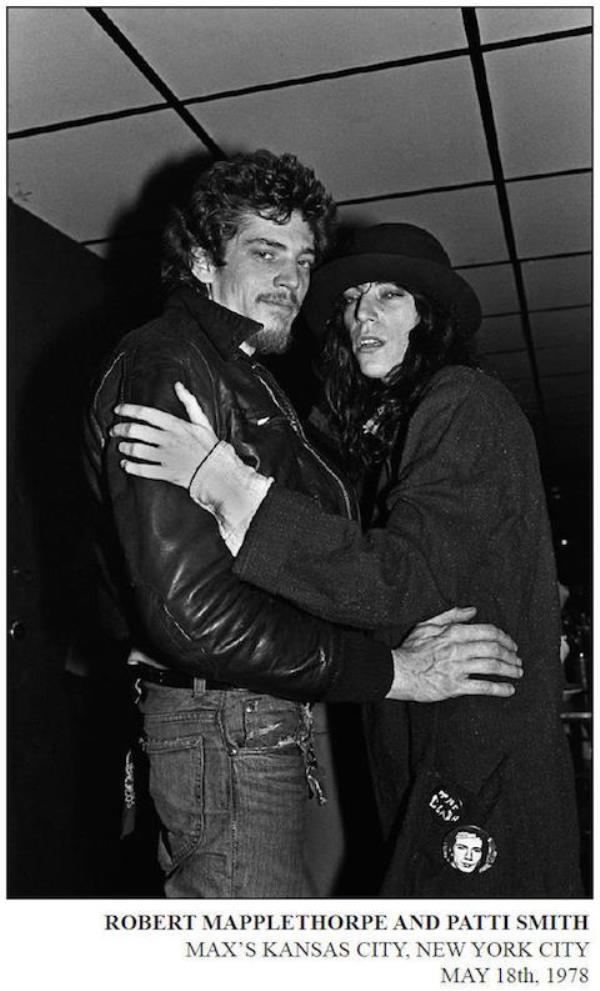 Artists and musicians were pulled into the orbit of the burgeoning punk scene. Robert Mapplethorpe, an accomplished photographer, was a scene regular and the subject of Patti Smith's acclaimed 2010 memoir, Just Kids.Allan Tannenbaum / Artnet 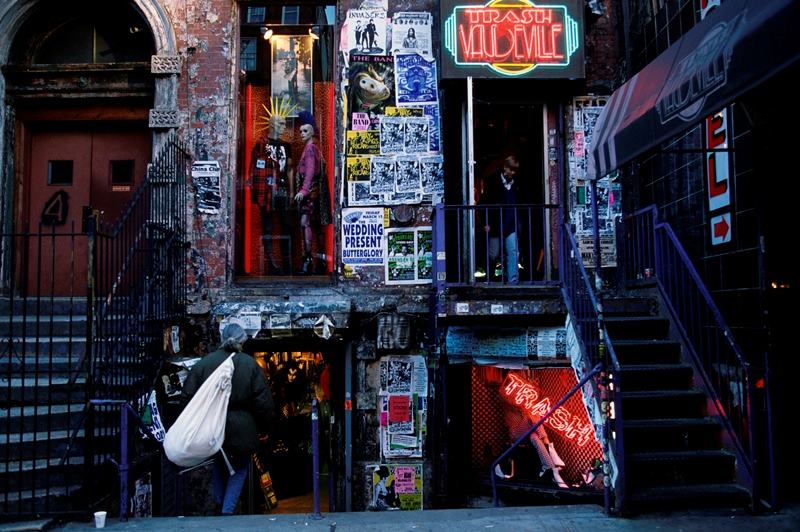 St. Mark's Place in the East Village became a hub for punk rock culture, with Trash and Vaudeville as the premier destination for punk fashion. Founded in 1975, the store outfitted such acts as the Ramones and Debbie Harry.Viviane Moos Holbrooke / Getty Images 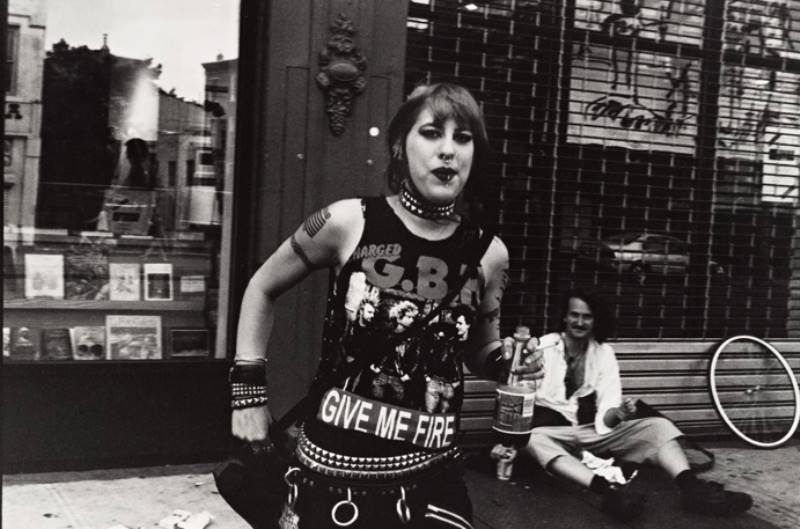 A woman in punk attire enjoys a beverage on St. Mark's in the summer of 1985.New York Public Library 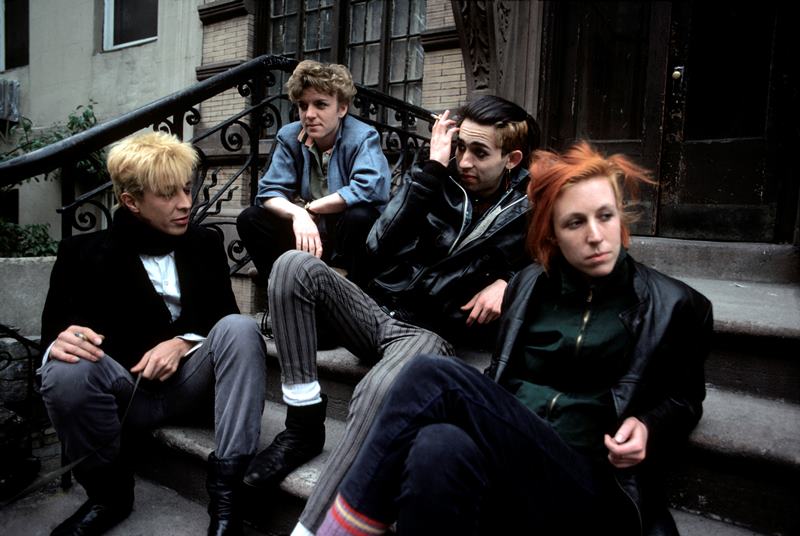 A group of friends hangs out in the Lower East Side in 1984.Steve McCurry / Magnum Photos 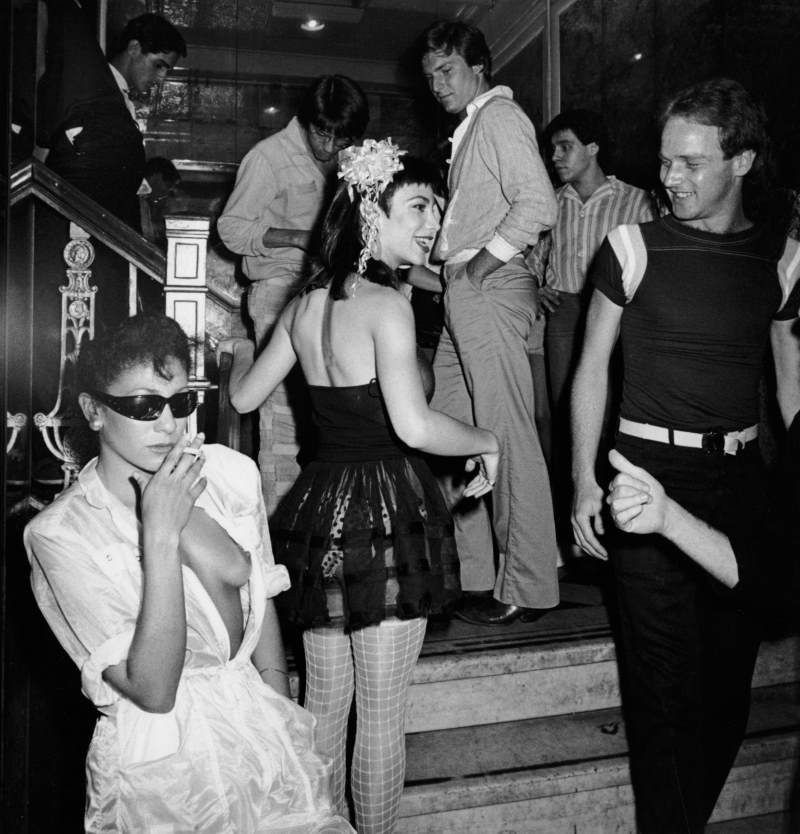 Punk's increased visibility in the streets of New York engendered a certain fetishization among high culture and fashion circles. Above, people attend the Punk Fashion Show in July 1980 at the Ritz Hotel.Ron Galella / Getty Images 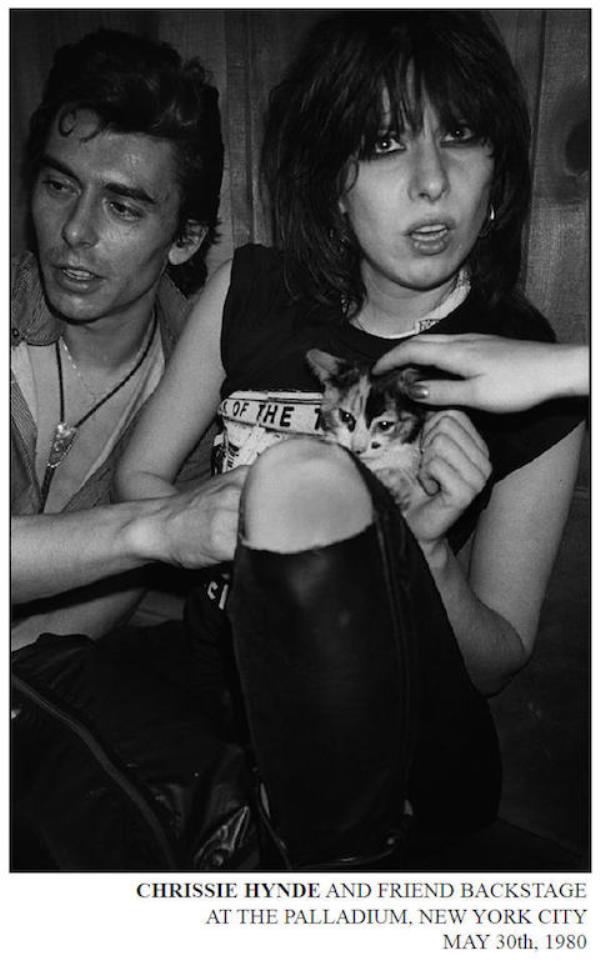 Chrissie Hynde was another New York punk scene staple during its nascent years. She would be a founding member of and the singer for The Pretenders for over three decades.Allan Tannenbaum / Artnet 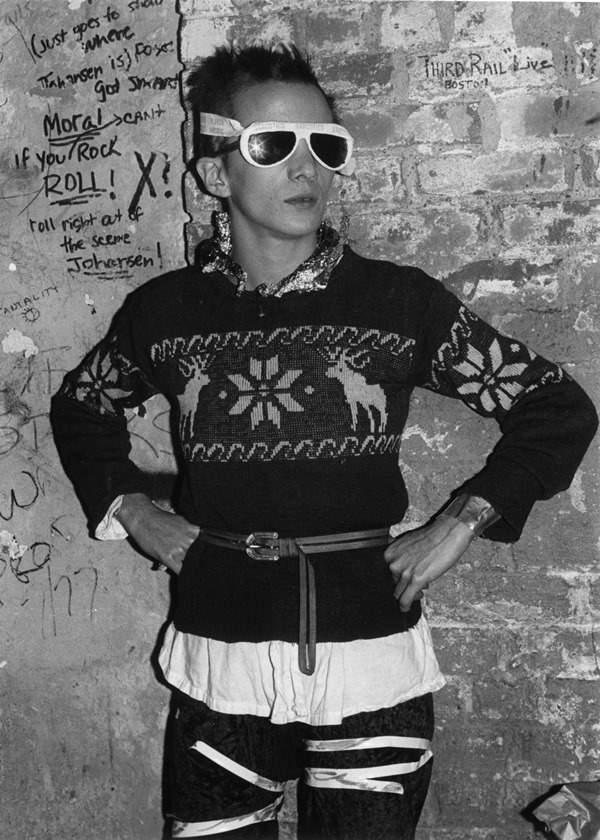 While punk culture became associated with a distinct style in popular culture, its emergent aesthetic was diverse and diffuse. At an October 1977 Richard Hell show at CBGB, a fan sports a Christmas sweater matched with duct taped jeans.Ebet Roberts / Getty Images 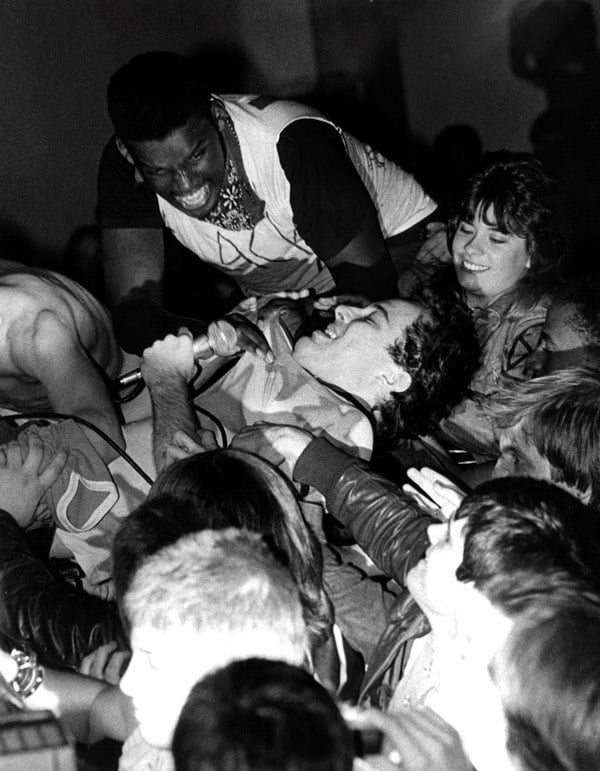 Punk shows became infamous for the immersive give and take between performers and audience. In the photo above, Dead Kennedy's lead singer Jello Biafra jumps into the crowd during a 1980 show.John P. Kelly / Getty Images 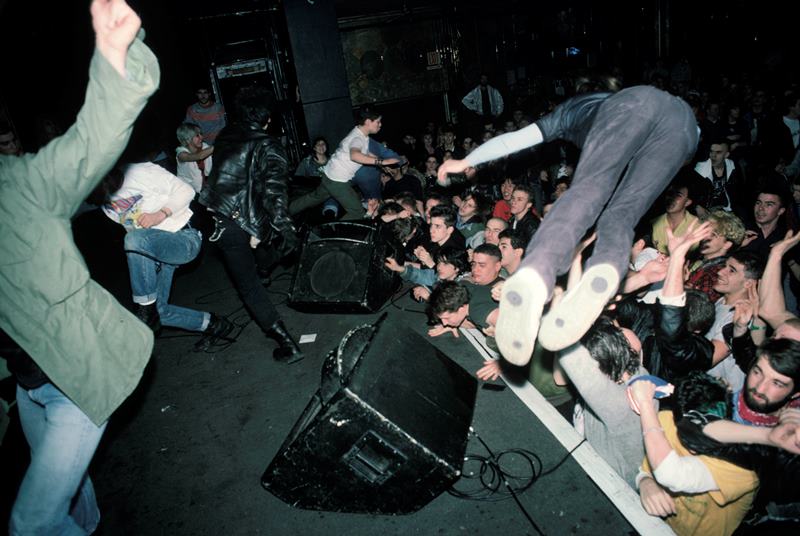 An audience member jumps into the crowd during a 1986 show at the Ritz.Eli Reed/Magnum Photos 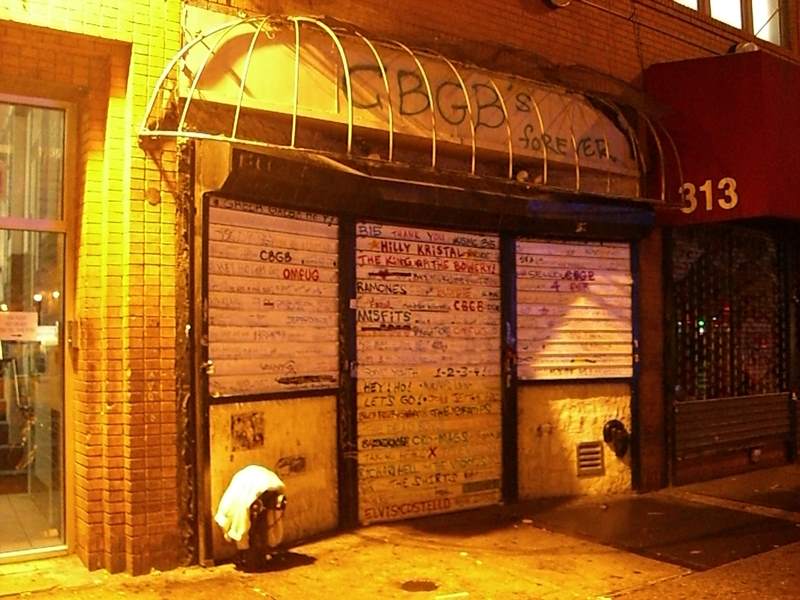 Like many commercial landmarks in New York, CBGB succumbed to the pressures of gentrification and rising rents. In 2006 it closed due to rent hikes. On October 15, 2006, Patti Smith and Flea from the Red Hot Chili Peppers gave the final performance.Wikimedia

And if you're a fan of punk of that era, we highly recommend you watch this video of Bad Brains playing at CBGB in 1982:

If you enjoyed this look at the punk era of New York, check out our other galleries on 1970s New York City and photos of when the New York subway was the most dangerous place on earth. Then, read up on punk rock wildman GG Allin.