Poop, Blood, And Punk Rock: Inside The Wild Life Of GG Allin

Known for both eating his own feces and mutilating himself on stage, GG Allin was perhaps the most shocking musician in history — until his dramatic death at just 36 in 1993.

Many words have been used to describe GG Allin. “Individualist,” “anti-authoritarian,” and “unique” are among the nicest. “Violent,” “chaotic,” and “madman” are some others.

All of those identifiers are true, but if you asked GG Allin how he would describe himself, he’d say just one thing: “the last true rock and roller.” And, depending on your definition of rock and roll, he just might have been. 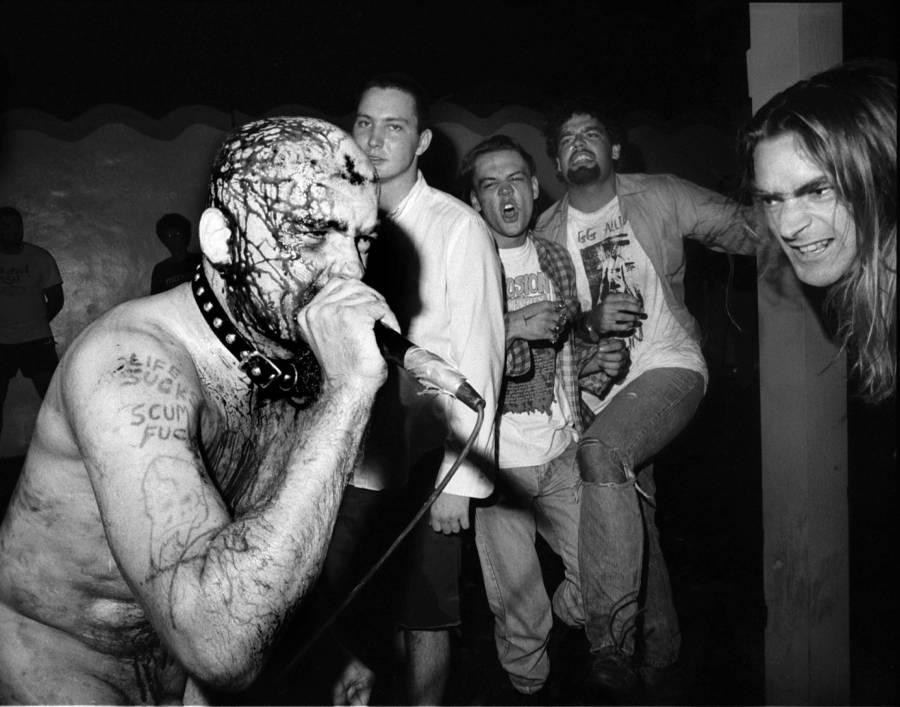 Frank Mullen/WireImageThroughout his strange life and even stranger death, GG Allin was almost impossible to ignore.

From his humble roots in rural New Hampshire to performing on stage and defecating (yes, defecating) in front of thousands of people, one thing was for sure: GG Allin was truly one of a kind. 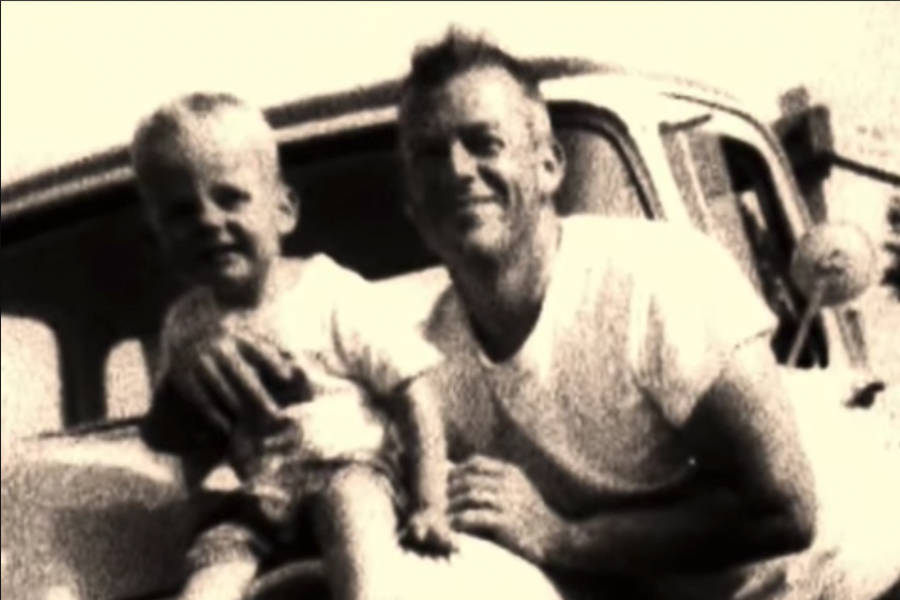 YouTubeGG Allin and his father, Merle Sr., in an undated photo.

Before he was cross-dressing, sparking riots, and exploring the world of hardcore punk, GG Allin had a very different start to life.

Born Jesus Christ Allin in 1956, GG Allin grew up in Groveton, New Hampshire. His father was a religious fanatic named Merle, and his family lived in a log cabin devoid of electricity and running water.

Merle Allin was reclusive and abusive and often threatened to kill his family. He even dug “graves” in the cabin’s cellar to prove he was serious. GG Allin later described living with Merle as a primitive existence — more like a prison sentence than an upbringing. However, he said that he was actually thankful for it, as it made him “a warrior soul at an early age.” 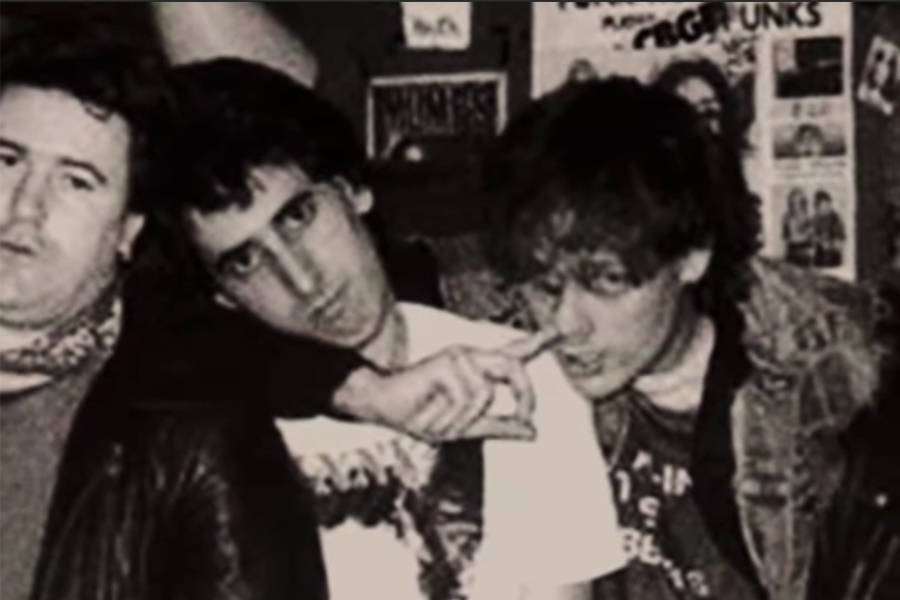 YouTubeGG Allin and his brother, Merle Jr., who sometimes played in bands with him.

Eventually, Allin’s mother Arleta got out and moved to East St. Johnsbury, Vermont, taking Jesus Christ and his brother Merle Jr. with her. Jesus eventually became known as “GG” — since Merle Jr. was unable to pronounce “Jesus” correctly. It kept coming out as “Jeejee.”

After Arleta remarried, she officially changed her son’s name from Jesus Christ to Kevin Michael in 1966. But in the end, GG stuck — and he would go by that nickname for the rest of his life.

Whether he was traumatized by his tumultuous early years or simply possessed a staunch disregard for the rules, GG Allin spent his high school years acting out. He formed several bands, cross-dressed at school, sold drugs, broke into people’s homes, and generally lived life on his own terms. But none of that compared to what was coming next. 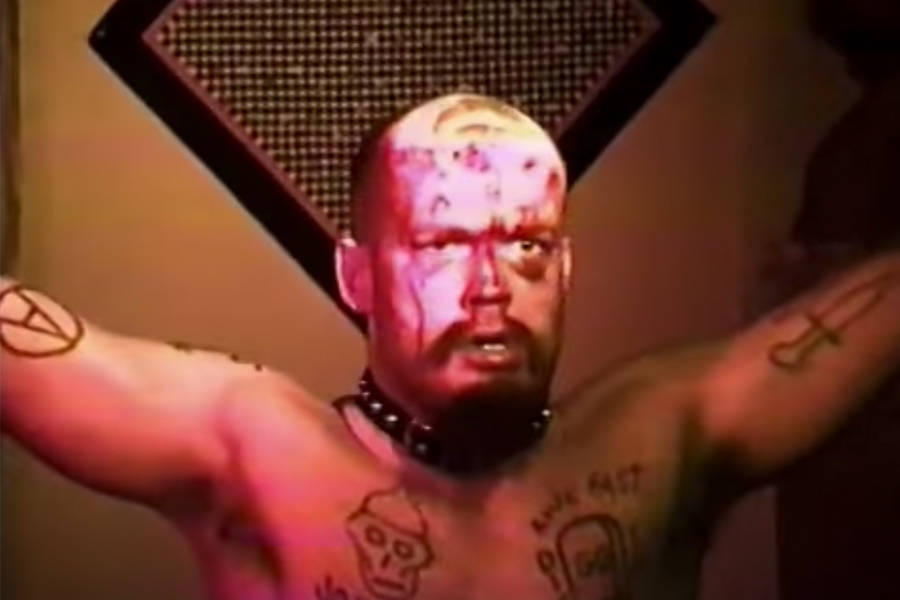 YouTubeGG Allin covered in blood for one of his controversial performances.

After graduating from high school in Concord, Vermont, in 1975, GG Allin decided not to pursue further education. Instead, he explored the world of music, inspired by his idols Alice Cooper and the Rolling Stones. (Interestingly enough, he also looked up to country music legend Hank Williams.) Before long, he broke onto the scene as a drummer, performing with several groups and even forming two bands with his brother Merle Jr.

In 1977, GG Allin found a more permanent gig playing the drums and singing backup for the punk rock band The Jabbers. He soon released his debut album, Always Was, Is and Always Shall Be, with the band. But by the mid-1980s, Allin was causing tension in the band due to his constant refusal to compromise with them. He ultimately left the group in 1984.

Throughout the 1980s, Allin again found himself hopping from band to band. He appeared with groups like The Cedar Street Sluts, The Scumfucs, and the Texas Nazis, garnering a reputation as a hardcore underground rocker. After a particularly wild performance with the Cedar Street Sluts in Manchester, New Hampshire, Allin gained a new nickname: “The Madman of Manchester.”

But in 1985, Allin decided to take his “madman” title to a whole new level. While performing a show with Bloody Mess & the Skabs in Peoria, Illinois, he defecated on stage for the first time — in front of hundreds of people. Unbeknownst to the crowd, the act was entirely premeditated.

“I was with him when he bought the Ex-Lax,” recalled Bloody Mess, the band’s frontman. “Unfortunately, he ate it hours before the show, so he constantly had to hold it in or he would’ve sh*t before he got onstage.” 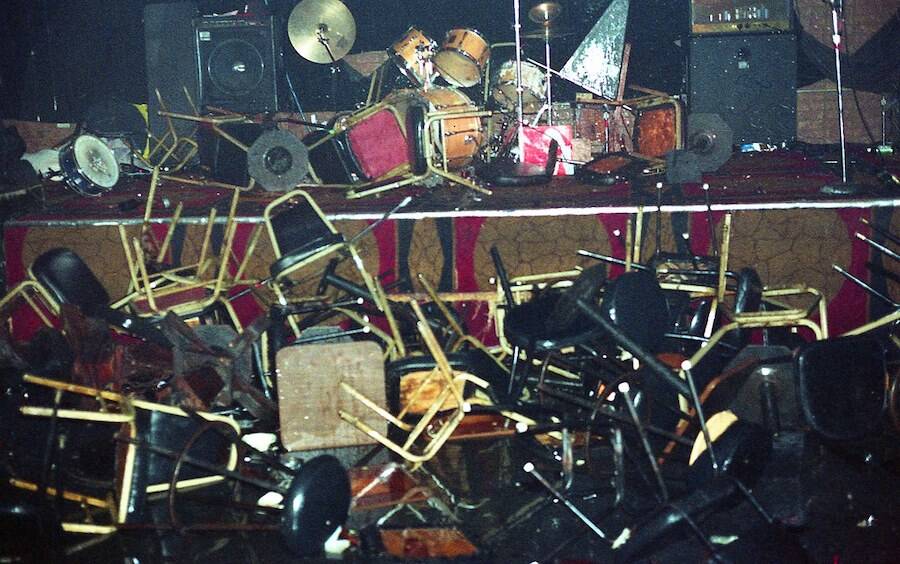 “After he sh*t onstage, complete chaos broke out in the hall,” Bloody Mess continued. “All of the old men in charge of the hall went f*cking nuts. Hundreds of confused punk kids were flipping out, running out the door, because the smell was incredible.”

The reaction was evidently the one that GG Allin was going for, as defecation soon became a regular part of his stage act.

But before long, he wasn’t just defecating onstage. He started eating the feces, smearing them around on the stage, and even throwing them at audience members. He also incorporated blood into his performance by pouring it onto his body and spraying it across the stage and audience.

Naturally, the destructive nature of his sets often resulted in venues and equipment companies severing ties with Allin. Police were sometimes called, especially when Allin began jumping into crowds and onto his fans. Several female concertgoers claimed that he sexually assaulted them after the shows, and some alleged that he attacked them during his sets.

It’s no surprise that Allin found himself in and out of jail for various crimes. But perhaps the most serious stint was in 1989 — when he was sentenced to prison for assault. He admitted to cutting and burning a woman and drinking her blood. He ultimately served 15 months in prison for that crime.

Inside The Final Years Of GG Allin 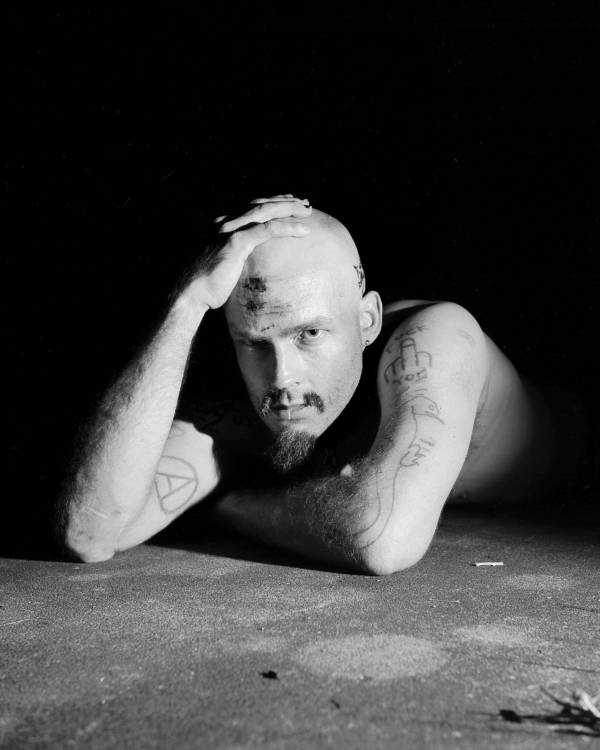 Frank Mullen/WireImageEver since GG Allin’s death in 1993, he’s held one of the most bizarre legacies of all time.

GG Allin carried the weight of his childhood throughout his life, constantly bucking authority to make up for the years that he spent under his father’s crushing thumb. His close friends also saw his total embodiment of punk rock as an escape from consumerism and commercialism — and as a desire to return rock and roll music to its rebellious roots.

Due to poor recording and distribution, Allin’s music would never really take off in the mainstream. He would never see the same level of success as other “shock rockers.” Nevertheless, he continued to perform throughout his life, and he often drew crowds of hundreds or even thousands of punk fans — most of whom were more interested in his antics than his music.

Considering his dark personality, it’s no surprise that he found solace in the macabre even when he wasn’t on stage. He often wrote to and visited serial killer John Wayne Gacy in prison. And at one point, he even commissioned a painting by Gacy to use for his album cover art.

His personal fascination with serial killers added yet another dark layer to his shocking lifestyle. In fact, sometimes he’d hint that if he were not a performer, he might’ve ended up becoming a serial killer instead.

But in the end, GG Allin was perhaps most destructive to himself. 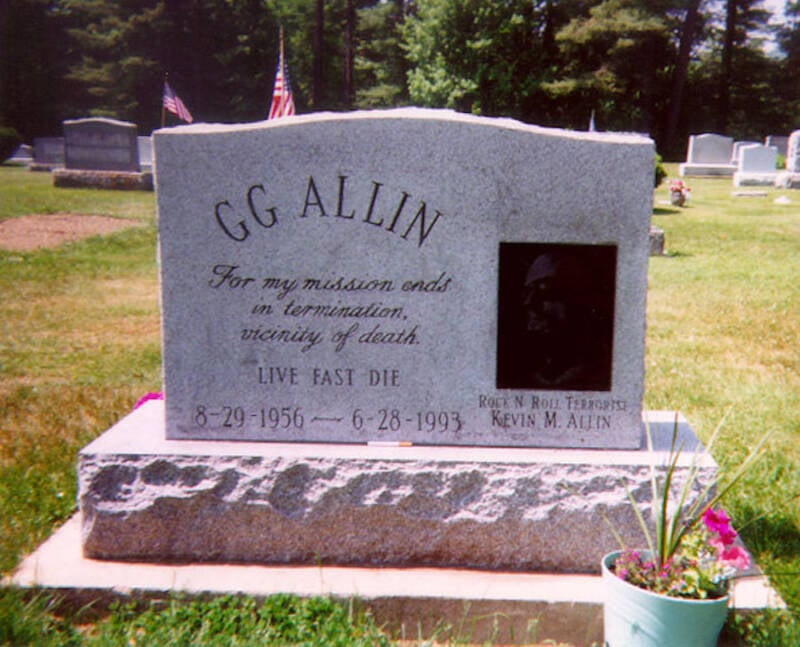 Starting in 1989, he began threatening to kill himself during one of his performances, likely around Halloween. But as it turned out, he was in prison during that time period. It’s unclear whether he would have followed through with the threats if he had been free. But once he was released, many people started buying tickets to his shows just to see if he would actually end his own life in front of a crowd.

Ultimately, he didn’t kill himself on stage — but his last performance on June 27, 1993 was still a one-of-a-kind spectacle. After his show at Gas Station in New York City got cut short, he started a brutal riot just outside the venue before escaping to a friend’s home to do heroin.

GG Allin was found dead the next morning of an overdose, still reeking of blood and feces from the night before. And because he’d left instructions to not wash his corpse after he died, he was still covered in bodily fluids for his own funeral. He was 36 years old.

It’s believed that GG Allin’s death was accidental, but some have speculated that it was intentional on his part — and a sign that he’d kept his promise to eventually kill himself. Ultimately, it’s hard to say exactly what was going through his mind during his final moments. But one thing’s for sure: He made it very clear throughout his whole life that he didn’t intend to live to old age. And he regularly claimed that suicide would be his undoing.

“It’s not so much wanting to die,” he once said, “but controlling that moment, choosing your own way.” And in life – and possibly in death – GG Allin chose his own way.

After reading about the life and death of GG Allin, learn about the rock and roll groupies that changed music history. Then, take a look at the dark side of David Bowie.