"[The] triumphal arc, which was built in the 3rd century in memory of the Roman Empire's victory against the Persians, looks magnificent." 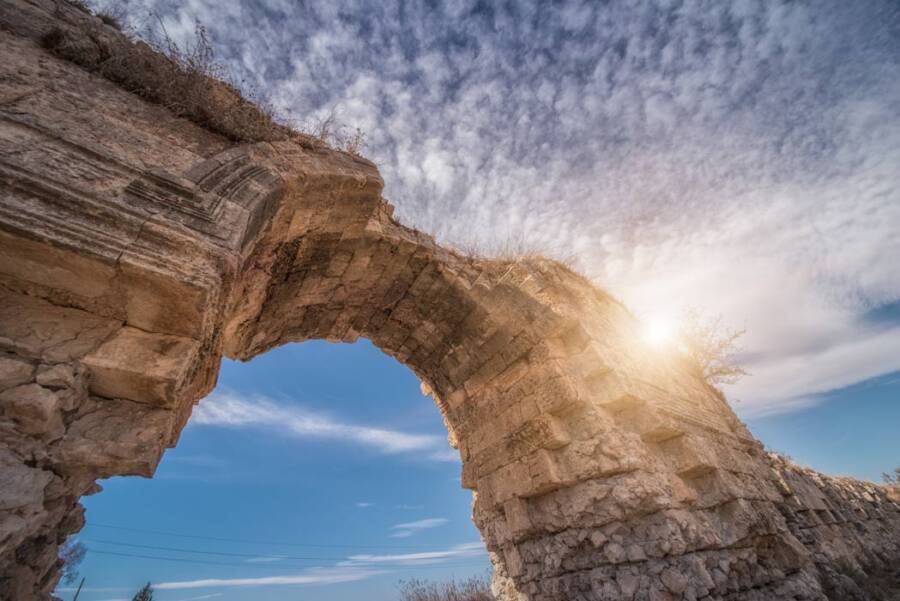 Ancient OriginsAn arch that comprises a mere fraction of the ancient ruins uncovered in Anavarza.

Roman gladiator events so often show up in movies, legends, and the like that it’s sometimes hard to remember that these bloody spectacles actually once happened in real life. And Turkish archaeologists digging in the southern province of Adana’s Dilekkaya village recently came face to face with direct evidence of these violent shows that unfolded centuries ago.

According to The Hürriyet Daily News, an archaeological dig led by Çukurova University’s Fatih Gülsen in the 2,000-year-old city of Anavarza (also known as Anazarbus) has revealed a battlefield used by gladiators, complete with a large triumphal arch.

With a record budget of one million Turkish Liras, the university’s archaeology department has spent the last 14 months on these excavations. Gülsen said the ancient city housing this site was the largest settlement in Anatolia — churches, rock tombs, aqueducts, mosaics, a theater, castle, and the arch once comprised the city.

“Even the 22.5-meter-long (74 feet) and 10.5-meter-high (35 feet) triumphal arch, which was built in the 3rd century in memory of the Roman Empire’s victory against the Persians, looks magnificent,” said Gülsen.

“Anavarza,” which means “invincible” in Farsi, was once home to another historically unique attraction: the biggest double road of the ancient era. 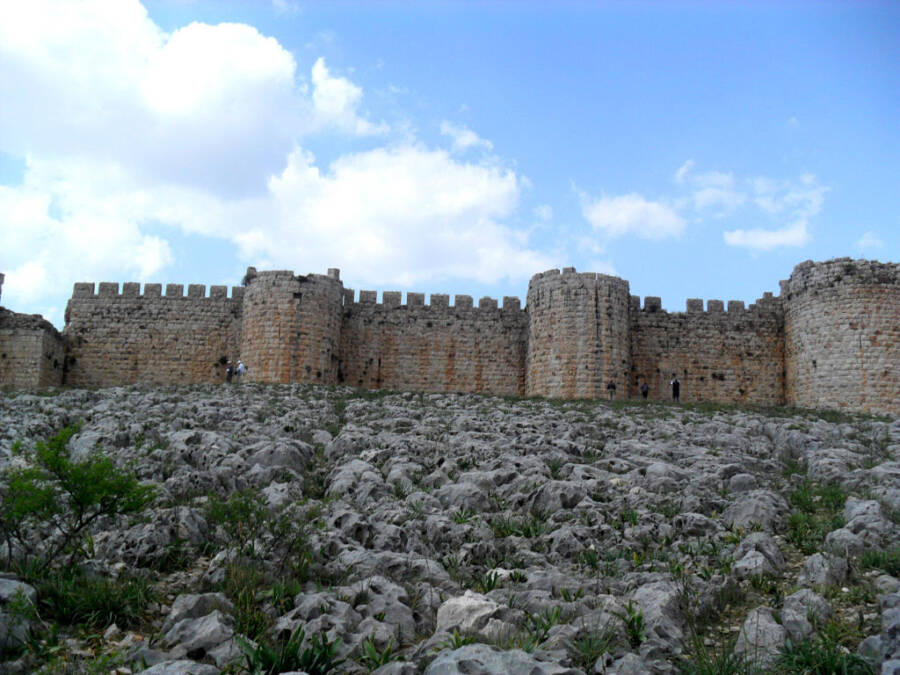 Gülsen explained that works like the aforementioned infrastructures and buildings in the city of Anavarza were built to last. Now, 2,000 years later, well-funded excavations have managed to reveal them to us after millennia of standing firm.

According to Ancient Origins, the triumphal arch discovered in 2015 originally had three arches, but only two have remained standing. Restoration experts have since begun using laser scanners to assess where which blocks of stone would go in order to restore the structure to its original state.

“It is a huge and unique structure decorated with Corinthian heads, columns, pilasters [rectangular columns] and niches,” said Gülsen. “Because of these features, it is the only one in the region that we call Çukurova today, and one of the few monumental city gates within the borders of Turkey.”

“Works in the ancient city show that the city was established by Emperor Augustus in 19 B.C. but we know there were earlier settlements,” Gülsen said. “The sole, largest double road of the ancient era is here.” 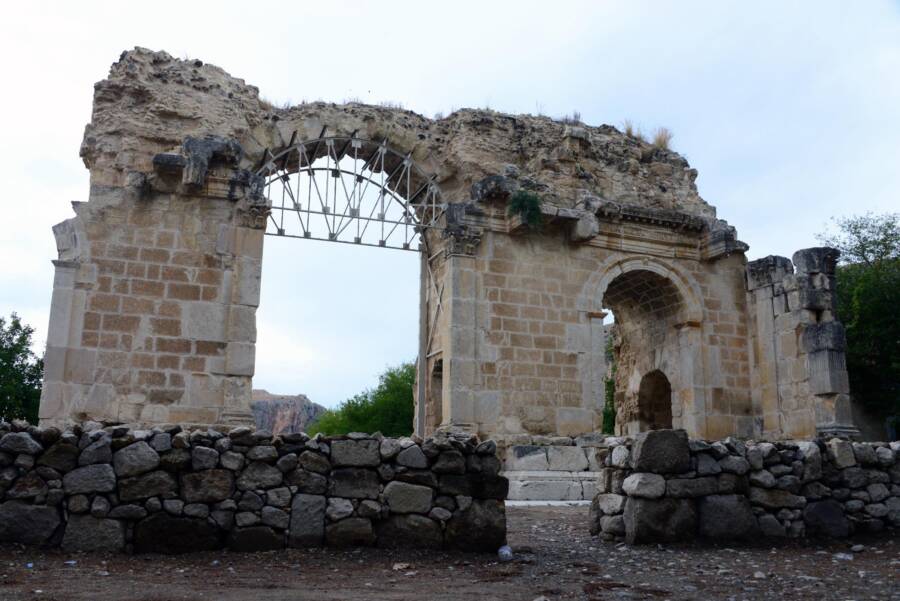 DHA PhotosThe lead archaeologist on the Anavarza dig, Fatih Gülsen, said the joint appeal of both history and archaeology could greatly boost tourism to the ancient settlement and surrounding towns.

If Gülsen’s excavations merely uncovered the city’s ancient church alone, it would be an archaeological dig well worth the funding. Built in the fifth century, the church was constructed on the foundations of a Roman temple. According to Gülsen, it was likely built for saint Dioscorides, “the father of pharmacies.”

“[He] was born in this city and prepared nearly 1,000 medicines by using some 50 plants unique to this ancient city,” Gülsen said.

But Anavarza wasn’t just home to gladiatorial matches, impressive pharmacists, and stunning architectural work. The city also developed a strong academic foundation where literary education and the beauty of poetry were fostered.

“One of the world’s best known poets Opianus also lived here,” said Gülsen. “We think that this ancient city had university-like schools where these important people studied. A brick-made bath in the ancient city is also the first example of [a] heating system in the region.”

Anavarza is a fairly sizable city, covering 132,233 square feet. Gülsen feels the ancient discoveries — such as the remarkable find of one of the largest stadiums in Anatolia — could substantially boost tourism in the area. 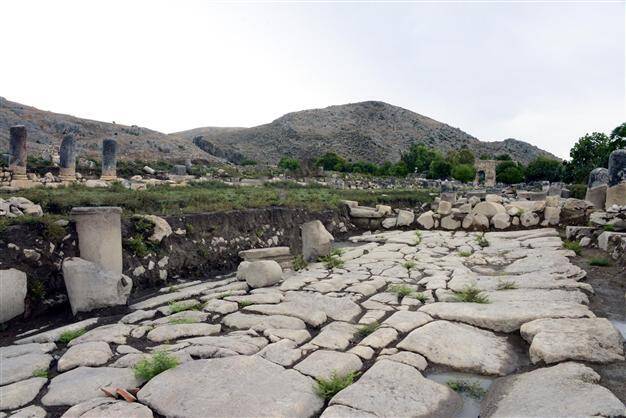 According to The Daily Sabah, Anavarza is on UNESCO’s Temporary World Heritage List. With an ancient, oval-shaped theater complex that once held gladiatorial matches, the historical prestige is easy to see. Gülsen said his team is currently analyzing a throne made out of stone, which nobles likely occupied while the bloody battles ensued.

“We are analyzing how the amphitheater was planned and designed, how the gladiator fights took place, which animals were used and what type of necropolis the deceased were buried in, all of which will shed light on the period’s history,” Gülsen explained.

“[The stadium] has observation towers made of giant granite columns. Stadiums are the places where the world’s first Olympic Games were held,” said Gülsen. “The amphitheater, where we have not started digging yet, is located on a vaulted structure.”

“The rooms of gladiators and cells of wild animals like lions and tigers will definitely come to light during excavations. There are three examples of this in Anatolia. The best one among these three surviving examples is in Anavarza. When we find this structure, it will be the only example in Anatolia after the restorations.”

Gülsen believes this ancient city has much to offer visitors from around the world. While there’s likely much more to discover here, what has been revealed already represents a remarkable trove of artifacts that provide a window into what life was like here long, long ago.

After learning about the gladiatorial arena and ancient structures uncovered in Turkey, read about the lost Mayan “megalopolis” uncovered in the jungles of Guatemala. Then, learn about the ancient “city of giants” uncovered in Ethiopia that reveals the origins of Islam in the region.