Entire Ancient Roman Town Discovered Off A Highway In England

In addition to ancient Roman pottery, jewelry, rare coins, and evidence of a road system, the 18-acre site also held the remains of an ancient temple. 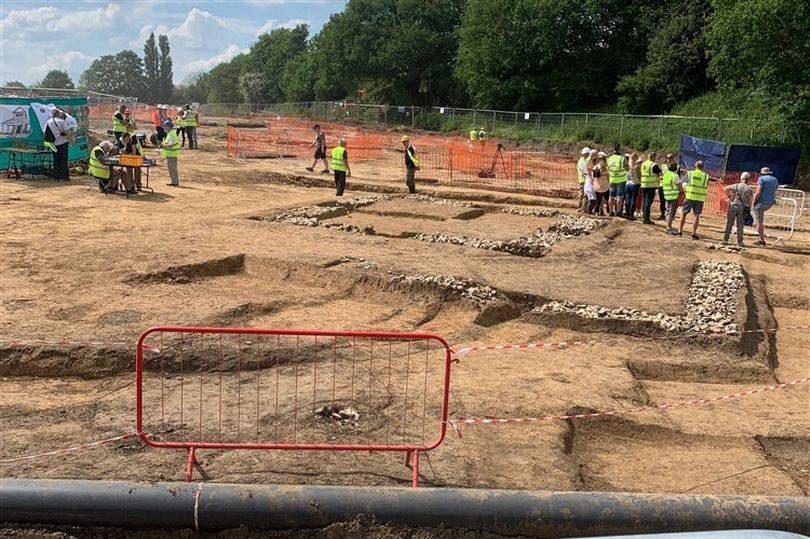 KMG/SWNSThe site was found during the development of 124 new homes on an 18-acre plot near the A2 in Newington, Kent.

The remains of an entire ancient Roman town have been discovered close to a highway in southeast England. Construction workers were preparing to build more than a hundred new houses when they came upon the nearly 2000-year-old ruins.

According to The Independent, a team of 30 archaeologists has spent eight months excavating the site. They’ve found rare coins, pottery, and jewelry dating back to as early as 30 B.C., as well as the remains of an ancient temple. The discovery of the 18-acre site off the A2 highway in Newington, Kent has proven to be a “massive” win in terms of contextualizing the region’s past.

“This is very exciting,” said Dean Coles, chairman of the Newington History Group. “The scale of this site, with the huge number and quality of finds, changes our knowledge of Newington’s development.”

Evidence of a 23-foot-wide road, sunken pottery kilns, and rare iron furnaces were also found at the site. Additionally, numerous costly items imported from other regions indicated that those who lived here at the time were of fairly high status.

Experts have called this find one of the most significant excavations in the region’s history.

This remarkable discovery was made when housing developers were preparing to build 124 new homes. In all corners of the world, it seems, building new tenements often unearths unexpected historical remnants and artifacts.

“We already had evidence of a Roman burial ground and Roman occupation in the immediate vicinity and this excavation shows there was a thriving manufacturing site in the heart of our village,” said Coles.

The current plan is to analyze the unearthed findings and collate all relevant data in a thorough scientific report. Once that is accomplished, experts will cover up the excavation site so the housing project can continue as planned. For now, though, the focus is on the amazing evidence that’s been found.

“The temple and major road are massive discoveries,” said Coles. “It proves the A2 wasn’t the only Roman road through the village. As a group, we are keen to trace the route and destination of this new ‘highway’ which may have connected with another temple excavated 50 years ago on the outskirts of Newington and a village unearthed in 1882.” 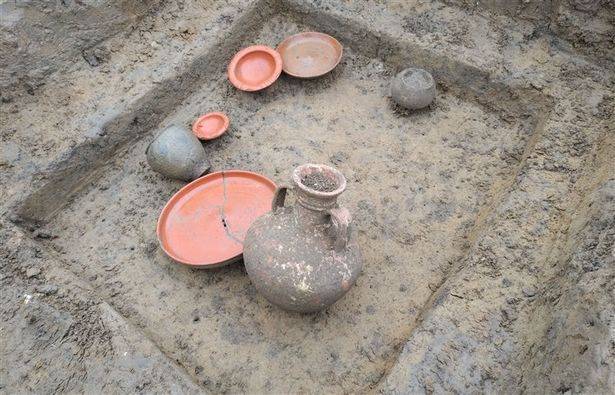 SWNSIn addition to pottery, jewelry, and a 23-foot-wide road, remains of an ancient temple were unearthed. Some of the items on the 18-acre site date to as early as 30 B.C.

With the Romans having taken over and occupied Britain for nearly 400 years after invading in 43 A.D., it’s no surprise that evidence of their time there remains scattered across the island. A significant portion of the 73-mile-long Hadrian’s Wall, for instance, still stands as a remnant of Ancient Rome.

“This is one of the most important discoveries of a Roman small town in Kent for many years with the preservation of Roman buildings and artifacts exceptional,” said Dr. Paul Wilkinson, archaeological director at Swale and Thames Archaeological Survey.

According to The Daily Mail, there’s much work ahead for the researchers involved. Finding the site, of course, was only the beginning. Archaeology project manager Peter Cichy, at least, is eager to commence the real work.

“This is one of the most significant sites in Kent but it’s only the beginning of months and months of work,” he said. “We will be analyzing and dating our finds, sorting and piecing together thousands of pottery shards, and writing up our report.”

As it stands, those waiting for their 124 new homes to finish construction may need to practice a little patience. One of the most valuable plots of Roman and British history has just been stumbled upon, after all — potentially holding answers to centuries-old questions of ancient life.