Archaeologists Have Just Discovered An Ancient Trojan City In Greece

This is the first evidence ever discovered that proves the lost city of Tenea truly existed beyond ancient myth and text.

Archeologists have searched for the ancient Trojan city of Tenea since 1984. They believe they have just now uncovered it. Before this excavation, the only knowledge that historians and experts had about Tenea came from Greek myth and ancient texts.

“Tenea was built by the Trojans after the end of the Trojan War, according to the myth,” Archaeologist Elena Korka, the director of the Office for Supervision of Antiquaries and Private Archaeological Collections in Greece’s Ministry of Culture said.

Korka and her team have been on the hunt for the fabled city for over 30 years now. There are mentions of the city in ancient Greek texts which indicate that a group of prisoners founded the city of Tenea after suffering a defeat in the Trojan War by the Greek hero Odysseus.

Now more than 3,000 years later, the first evidence that the city did in fact exist has been revealed.

The remnants of Tenea were found near a small village in southern Greece called Chiliomodi. The area yielded an organized residential space that stretches more than 670 meters, or 733 yards. The space included marble, stone, and clay floors that were found in good condition. Beams, small columns, storage spaces with jugs, and the tombs of two babies were also discovered at the site.

All of this evidence, along with other earlier discoveries made near Chiliomodi, indicate to Korka that the ancient city of Tenea was a reality at one point in time — and had become particularly wealthy.

Back in 1984, Korka and her team uncovered a sarcophagus near Chiliomodi, and something told her that she needed to get back to see if there was anything else left to uncover. 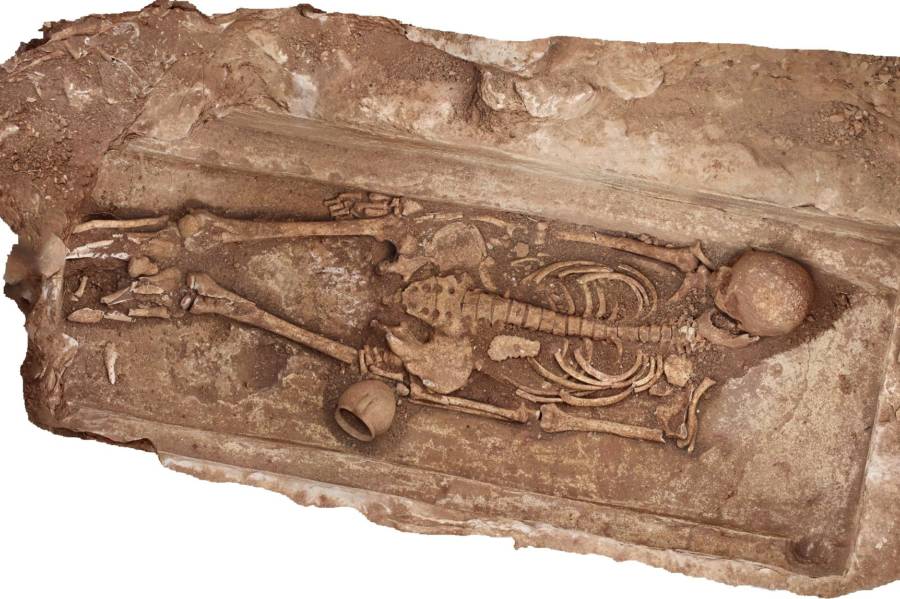 Tenea projectA sarcophagus with an urn.

“After I uncovered the sarcophagus, I knew I had to go back for more,” Korka reported.

Korka then reunited with her 1984 team in 2013 to go back to the town where she hoped there was more archeological evidence to be found — and she was right.

Although this project technically began in the 80s, it wasn’t until September 2018 that excavations at Chiliomodi began.

The team first discovered an ancient road and followed it to a graveyard that contained the remains of two men, five women, and two children. One of the children was buried with a woman, presumably its mother.

Archeologists then continued their excavations along the road further north and it was there that they found the first evidence of Tenea’s existence.

A depiction of the Trojan war.

The presence of clay pipes found at the dig site indicates to archeologists that this city was created and made into a long-term settlement. Korka believes that Tenea could have dated back to the Mycenaean era and was populated by wealthy residents.

A statement from the Greek culture ministry says that the city of Tenea grew economically during the reign of Roman Emperor Septimius Severus sometime between 193 and 211 A.D. They also estimate that the city was abandoned sometime during the sixth century.

“It is significant that the remnants of the city, the paved roads, the architectural structure, came to light,” Korka reported. “We’ve found evidence of life and death…and all this is just a small part of the history of the place.”

Next, read about this ancient Mexican city that might have had as many buildings as Manhattan does. Then, check out these ancient history facts that you definitely didn’t learn in school.