The Brazen Bull May Have Been History’s Worst Torture Device

Created as a horrifying torture device to roast humans alive, the Brazen Bull was designed for the tyrant Phalaris by his sculptor, Perilaus. 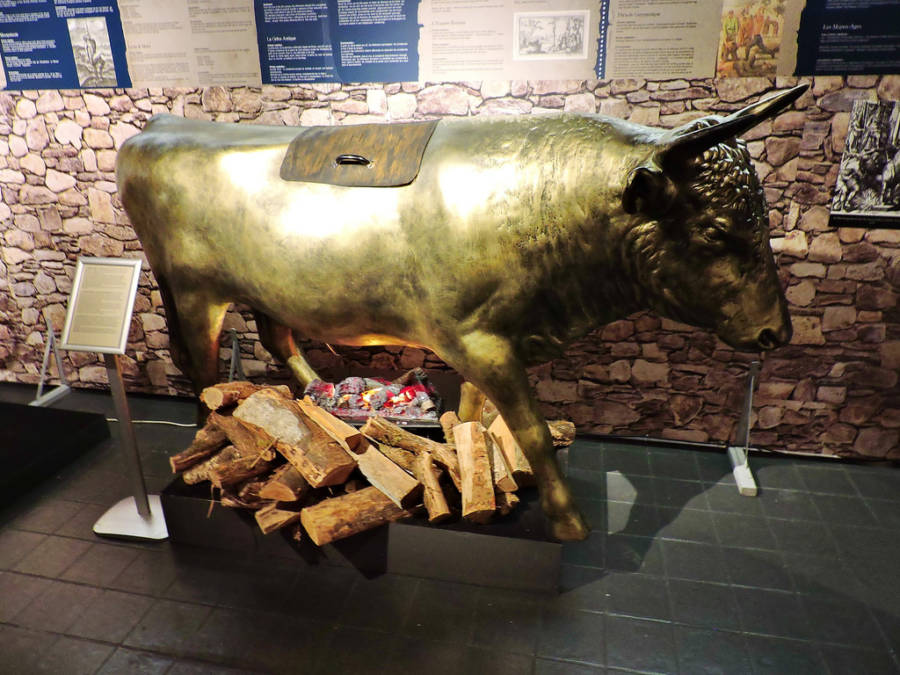 FlickrA depiction of the brazen bull in the Torture Museum in Bruges, Belgium.

The webs of Arachne, the foam that birthed Aphrodite, the love between Psyche and Eros — the mountain soil of Ancient Greece was rich loam for legends. While the canon is replete with epic loves and warlike glory, the stories that stick with us best are those of gore. The horror of the minotaur, the sack of Troy, the tragic fate of Medusa are as vivid in Western consciousness as if they stood before us in the red-and-black palette of an amphora.

Even more gruesome than these, however, is the legend of the brazen bull.

Once upon a time in ancient Greece around 560 B.C., the seaside colony of Akragas (modern-day Sicily) was controlled by a powerful but cruel tyrant named Phalaris. He ruled a wealthy and lovely metropolis with an iron fist.

It’s said that one day, his court sculptor Perilaus showed off his new creation to his master — a replica of a bull, in gleaming brass. This was no simple statue, however. It was affixed with pipes and whistles, hollow on the inside, and constructed over a roaring fire. This bull was actually a melodic torture device.

When the fire was stoked sufficiently, the poor soul would be thrown into the bull, where the heat of its metal body roasted him alive. The pipes and whistles converted the screams of the damned to the snorts and growls of a bull, a flair that Perilaus calculated would tickle Phalaris.

Whether or not it pleased him, the brazen bull proved useful to him — the first victim of many was supposedly Perilaus.

But like so many stories from antiquity, the truth of the brazen bull is hard to verify. 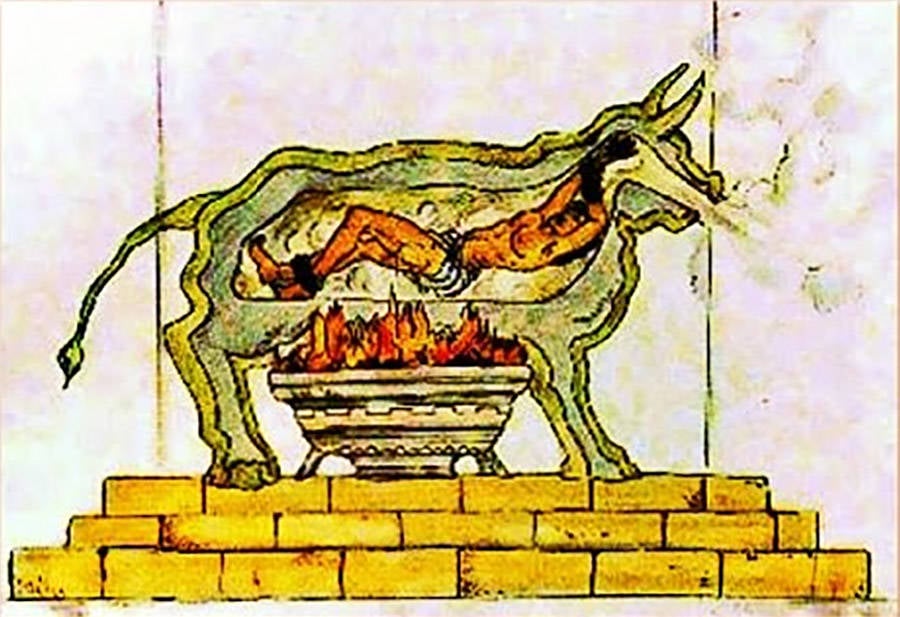 YouTubeA depiction of how the brazen bull worked.

Famed poet and philosopher Cicero recalls the bull as fact, and as proof of a cruel ruler’s viciousness in his series of speeches In Verrum: “… which was that noble bull, which that most cruel of all tyrants, Phalaris, is said to have had, into which he was accustomed to put men for punishment, and to put fire under.”

Cicero later used the symbol of the brazen bull to represent Phalaris’ cruelty and wondered if his people may have fared better under foreign dominion rather than be subject to his brutality.

“…[To] consider whether it was more advantageous to the Sicilians to be subject to their own princes, or to be under the dominion of the Roman people when they had the same thing as a monument of the cruelty of their domestic masters, and of our liberality.”

Of course, Cicero was a political operator and used his speech to paint Phalaris as a villain. Fellow historian Diodorus Siculus wrote that Perilaus remarked:

“If you ever wish to punish some man, O Phalaris, shut him up within the bull and lay a fire beneath it; by his groanings the bull will be thought to bellow and his cries of pain will give you pleasure as they come through the pipes in the nostrils.”

Diodorus’ Phalaris asked Perilaus to demonstrate his meaning, and when he climbed in the bull, Phalaris had the artist shut in and burned to death for his loathsome invention.

Whether evil tyrant or vigilante leader, one thing is clear: Phalaris and his brazen bull make a story for the ages.

After reading about the horrifying brazen bull, learn about some more torture devices like the rat torture method. Then look inside the declassified C.I.A. torture manual from the Cold War.