Before Chadwick Boseman's death was announced on Aug. 28, 2020, only a handful of people knew that the Black Panther star had been quietly battling colon cancer for years. 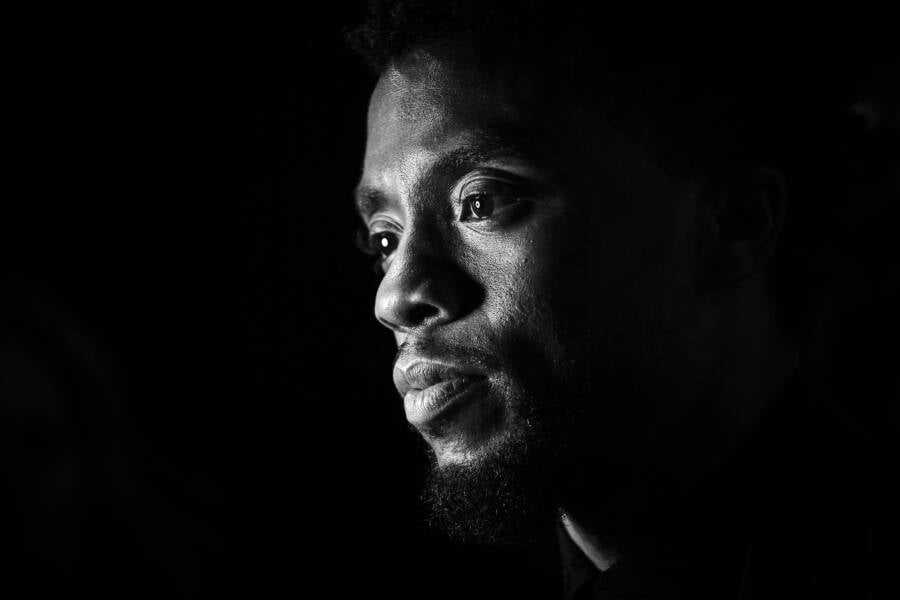 The unexpected news of Chadwick Boseman’s death in 2020 was met with shock and disbelief that was only compounded by Boseman’s cause of death: colon cancer that seemingly no one even knew he had.

Just two years earlier, Chadwick Boseman had become an international superstar. His portrayal of King T’Challa in 2018’s Black Panther inspired millions who had clamored for a Black superhero on the big screen to rush into theaters. It broke box office records, grossed $1.3 billion, and became a cornerstone of modern pop culture.

And yet as famous as he’d become, Boseman had decided to keep his battle with cancer private. Not even the directors of his final films knew of his diagnosis, which he’d received in 2016. And this made the story of how Chadwick Boseman died all the more shocking when the news finally broke.

Despite undergoing multiple surgeries and rounds of chemotherapy during and between filming what would become his final roles, the cancer tragically took its toll. But after Chadwick Boseman died, he left fans with his portrayals of some of history’s most famous Black icons, including James Brown, Thurgood Marshall, and Jackie Robinson — men of character whose stories he hoped would inspire future next generation for years to come.

From Aspiring Theater Director To The Black Panther

Chadwick Aaron Boseman was born on Nov. 29, 1976, in Anderson, South Carolina. Boseman’s father, Leroy Boseman, was a textile worker, while his mother, Carolyn Mattress, worked as a registered nurse. And though it would be years before he settled into his acting career, early on, he had qualities that would help him stand out: he was charming, handsome, and buoyed by the love of others. 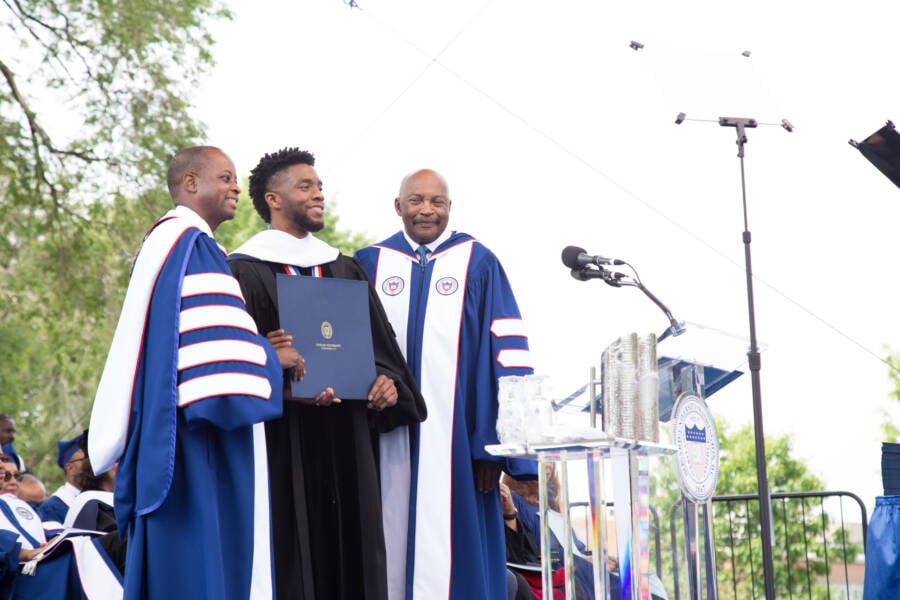 With martial arts as a fresh staple of 1970s cinema, Boseman became a practitioner. But he was mostly interested in basketball as a student at T.L. Hanna High School — until a teammate was shot and killed in his junior year. To process his grief, Boseman wrote a play called Crossroads.

“I just had a feeling that this was something that was calling me,” Boseman told Rolling Stone. “Suddenly, playing basketball wasn’t as important.”

At Howard University in Washington, D.C., with a determination to tell stories, he was mentored by actress Phylicia Rashad who tirelessly sought funding for her students from her peers. Contributions by Denzel Washington led Boseman to Oxford’s Summer Program of the British American Drama Academy in 1998.

Boseman graduated in 2000 with a bachelor’s degree in directing and spent the next few years writing and directing plays in New York before small parts on television shows like CSI: NY and Third Watch elevated his profile as a screen actor, according to The Hollywood Reporter. Boseman’s true breakthrough period, however, undeniably emerged in 2008.

His portrayal of American football player Ernie Davis in 2008’s The Express saw Hollywood casting agents take note. Boseman was cast in 42 as baseball icon Jackie Robinson in 2013 and then portrayed another legend in 2014’s James Brown biopic Get Up — and signed a five-picture deal with Marvel Studios in 2015.

Chadwick Boseman was honored to portray a Black superhero in Captain America: Civil War. He learned Xhosa and developed his own Wakandan accent for the role. However, when the film hit theaters in 2016, he was already fighting a real-life battle of his own — and told only a few close friends and relatives about it. 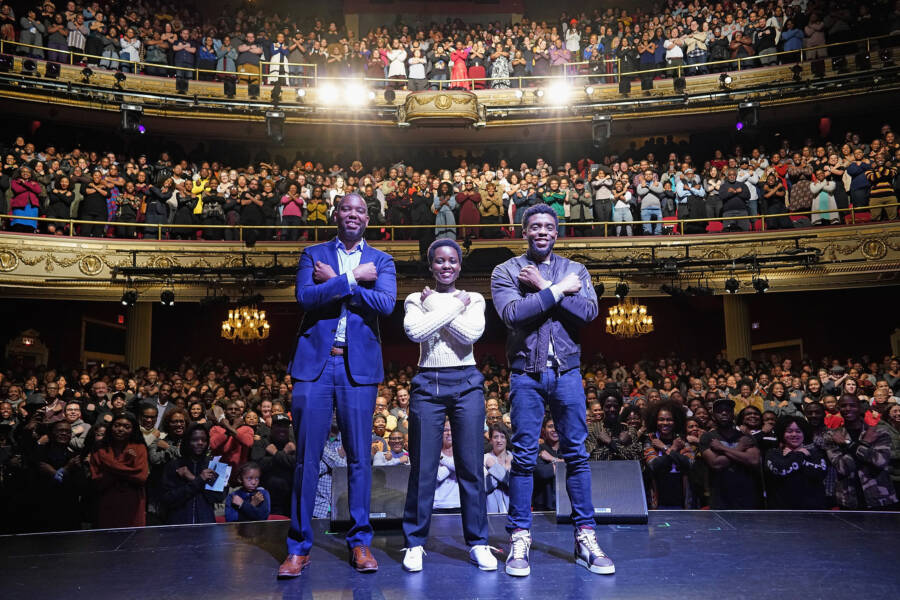 Chadwick Boseman’s death was caused by colon cancer, which was first diagnosed at stage III in 2016. It was made all the more tragic by the fact that he had only begun dating singer Taylor Simone Ledward one year before. They were secretly engaged in 2019 before quietly marrying in the hopes that theirs would be a long, fruitful marriage.

Boseman continued working throughout his battle with cancer, which included several surgeries and regular sessions of chemotherapy. From his portrayal of Norman Earl Holloway in Spike Lee’s Da 5 Bloods to Levee Green in Ma Rainey’s Black Bottom, Boseman never allowed his illness to get in the way of his work.

Boseman had even returned to his alma mater after two years of his ordeal in order to inspire students with a poignant commencement speech in 2018. According to The New York Times, he spoke of being fired from one particular production after questioning why his role was stereotypical and urged his young fans never to forget their principles.

Perhaps most telling of all was his claim that “the struggles along the way are only meant to shape you for your purpose.” The world at large would only realize just how true that was for him when his social media accounts released a statement saying that Chadwick Boseman died surrounded by his family — and millions shared their condolences online. 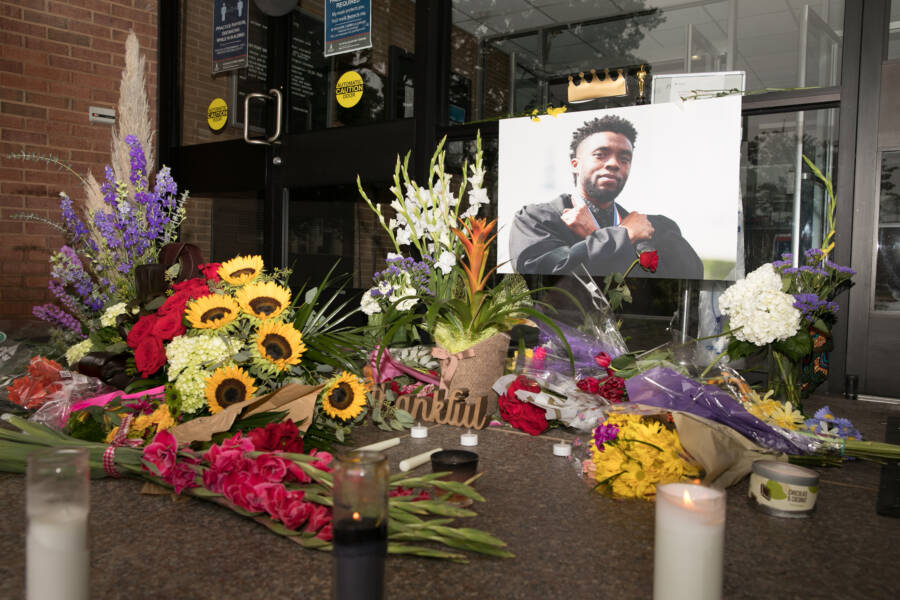 “What a gentle gifted SOUL,” wrote Oprah Winfrey on Twitter. “Showing us all that Greatness in between surgeries and chemo. The courage, the strength, the Power it takes to do that. This is what Dignity looks like.”

That dignity resulted in utter shock for those who knew Boseman only from his work but allowed his loved ones to prepare themselves for his death in private. In the end, Boseman had decided to let his work speak for itself.

How Did Chadwick Boseman Die?

Chadwick Boseman died on Aug. 28, 2020. It only took one day for the tweet announcing Chadwick Boseman’s death to receive more than 6 million likes, according to Variety. It became the most-liked tweet in history and yielded impassioned online tributes from people like Martin Luther King III, Marvel alumnus Mark Ruffalo, and Howard University president Wayne A.I. Frederick.

“It is with profound sadness that we mourn the loss of alumnus Chadwick Boseman who passed away this evening,” wrote Frederick, per CNN. “His incredible talent will forever be immortalized through his characters and through his own personal journey from student to superhero! Rest in Power, Chadwick!”

Most will remember Boseman as a superhero in their favorite comic-book films. Meanwhile, many of his collaborators cherish the more subdued projects like Ma Rainey’s Black Bottom. For Denzel Washington, who produced the film, Boseman’s resilience in filming while battling cancer left him most astonished. 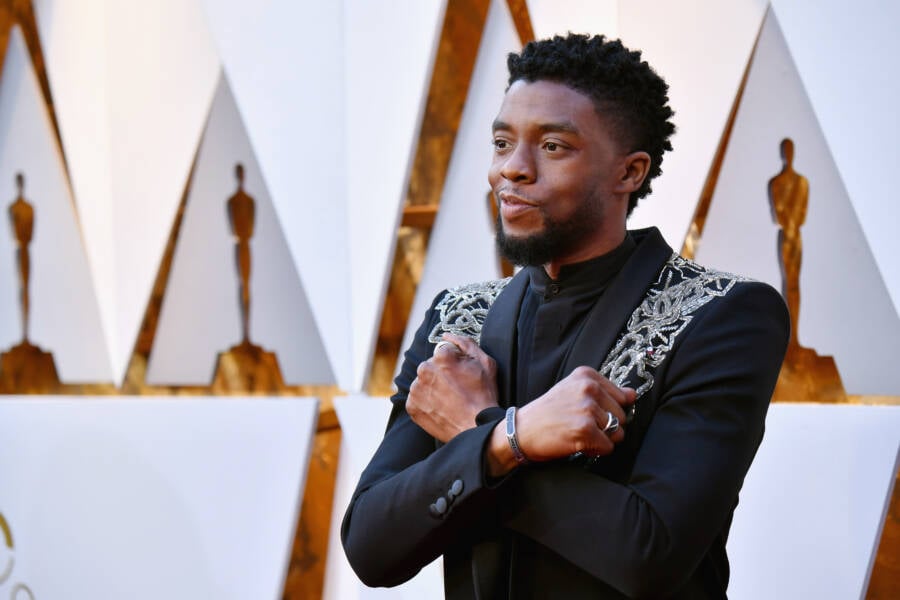 “He made the movie, and nobody knew,” Washington told Page Six. “I didn’t know. He never said a peep about it. He just did his job. I wondered if something was wrong because he seemed weak or tired sometimes. We had no idea, and it was nobody’s business. Good for him, keeping it to himself.”

Boseman spent his final years supporting cancer charities at St. Jude’s Hospital and donating money to the Jackie Robinson Foundation and Boys and Girls Club in Harlem — spurring Disney to donate $1 million to the latter.

And mere months before Chadwick Boseman’s death, he organized the donation of $4.2 million worth of personal protective equipment to hospitals fighting the COVID-19 pandemic in primarily Black and Hispanic neighborhoods around the country. The contribution was in honor of Jackie Robinson Day and symbolized his jersey number, 42.

In the end, Boseman’s family held a public memorial service in Anderson, South Carolina, on Sept. 4, 2020. He left a legacy of courage in the face of certain death, supporting his family during the most challenging time of their lives, and ensuring that younger generations keep their heads up — and never give up.

“He was a gentle soul and a brilliant artist who will stay with us for eternity through his iconic performances over his short yet illustrious career,” Denzel Washington recalled. “God bless Chadwick Boseman.”

After learning about Chadwick Boseman’s death, read about young Danny Trejo’s rise from prison to Hollywood fame. Then, learn about the terrifying last moments of Paul Walker before his tragic death.