The Long History Of The Crazy Horse Memorial, The Unfinished Monument To The Sioux War Hero

The massive Crazy Horse monument has been under construction in South Dakota’s Black Hills for more than 70 years and its completion is still many years away. 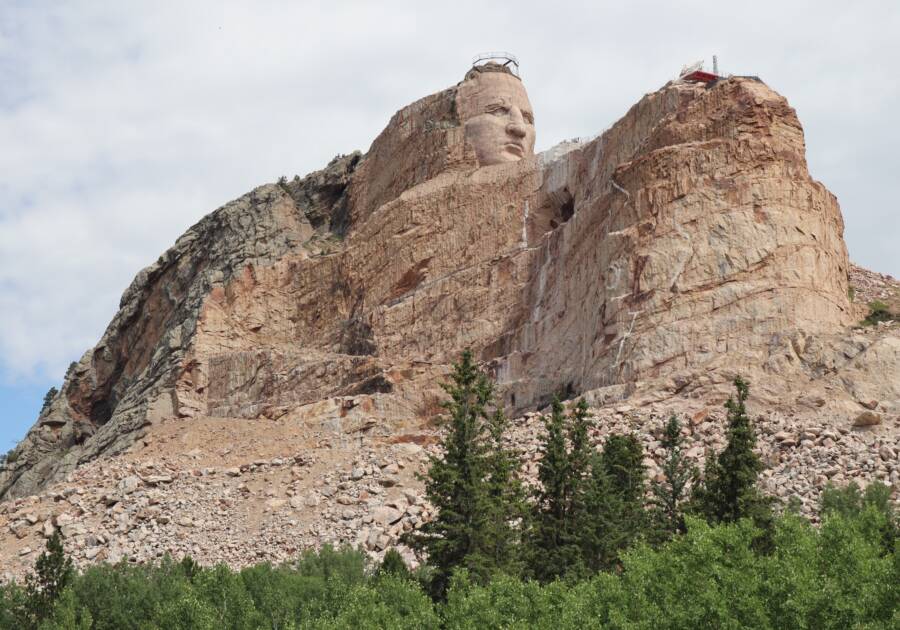 The Crazy Horse monument in the Black Hills of South Dakota’s Custer City is a marvel to behold. Despite construction having begun in 1948, the cliffside tribute to the Lakota chief has yet to be completed. Its development certainly makes for a riveting story, but is all the more remarkable for the man it aims to honor.

If completed, the sculpture will depict the Native American warrior on his horse and pointing to his tribal land below — which the Oglala sub-tribe he led considered sacred. His head is currently the only finished part of the sculpture. At 87 feet high, it exceeds that of each U.S. President’s head at Mount Rushmore by 27 feet.

That purposeful scale speaks volumes, as Crazy Horse honorably led his tribe in historic battles across the 1800s and defended his people against the brutal encroachment of the U.S. government to the very end. Viciously bayoneted to death for resisting imprisonment, he left the Lakota determined to honor him in stone.

The Life Of Crazy Horse 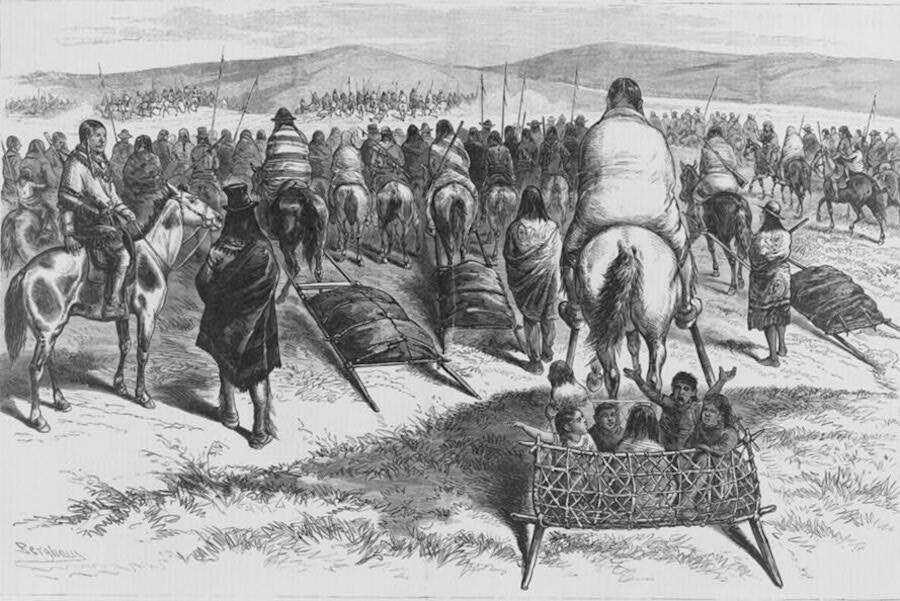 Wikimedia CommonsA depiction of Crazy Horse and his tribe on their way to surrender to General Crook.

Born Tasunke Witco in 1840 in Rapid Creek some 40 miles from the sculpture, he was raised by a medicine man and was an Oglala Lakota member from birth. The old ways of Indigenous life in America had already come under attack, with additional inter-tribe squabbles furthering the Native American plight.

As a boy, Crazy Horse completed the Lakota rite of passage Hanbleceya (or “crying for a vision”). He wandered into the hills to cry for four days without food or water to connect with the spirits. Then, as a teenager, he would ride into battle with a lightning bolt painted on his face and a feather in his hair.

He most notably led the Lakota in the Battle of Little Bighorn in 1876 against Commander George Armstrong Custer’s Seventh U.S. Cavalry battalion. “Custer’s Last Stand,” left all 280 U.S. soldiers and nine officers dead. It was Crazy Horse’s love of his people and prowess in battle that led the U.S. Military to amplify its violence against the Indigenous. 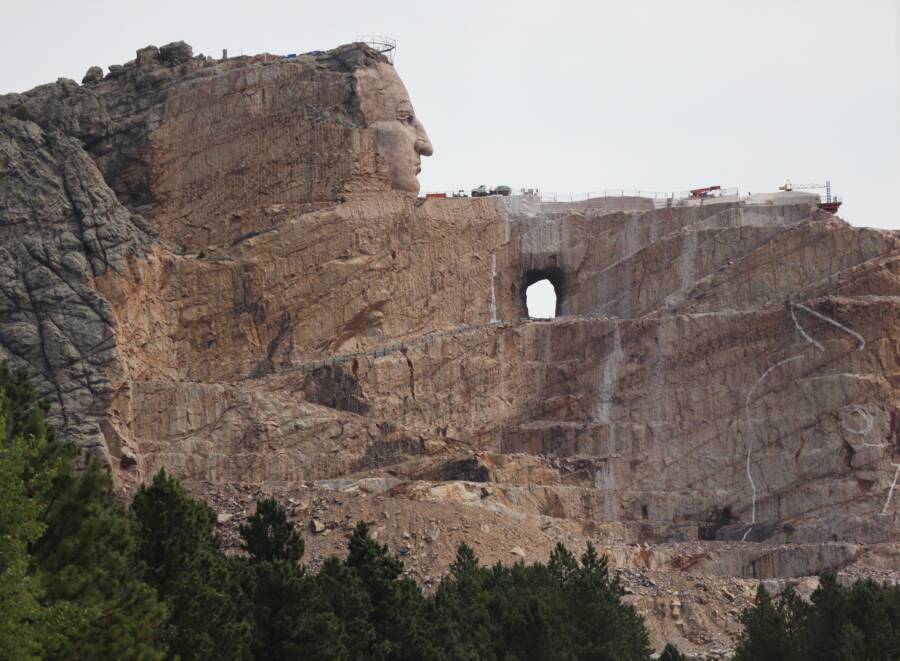 The government began expanding scout deployments across the Northern Plains to round up any resisting Native Americans, with those who were forced to move elsewhere dying of starvation or succumbing to the elements. Ultimately forced to negotiate, Crazy Horse traveled to Fort Robinson in 1877 — under a truce.

Those who were there reported that Crazy Horse’s translator misinterpreted his words, resulting in peace talks crumbling before his eyes — and commanding officers opting to imprison him. Defiant to his last breath, the Lakota chief drew his knife and an infantry guard bayoneted him to death — although exactly what happened remains a subject of controversy. It was Sept. 5, 1877.

The Origins Of The Crazy Horse Memorial

While Crazy Horse believed that having his picture taken would rob him of his soul and shorten his life, Lakota chief Henry Standing Bear believed honoring Crazy Horse with a monument was imperative. After all, the U.S. Presidents had been honored with Mount Rushmore some 17 miles away — in a glaring injustice. 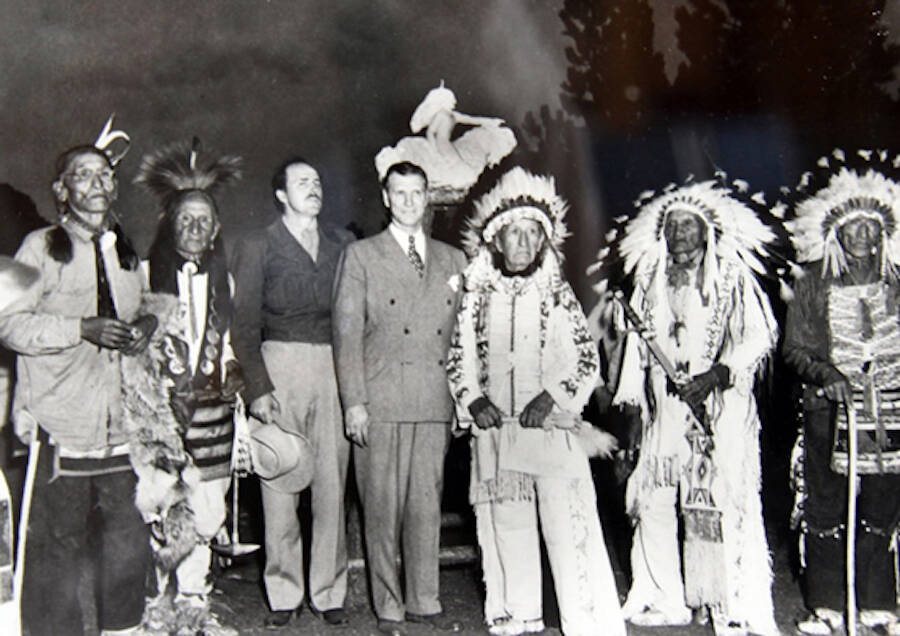 “My fellow chiefs and I would like the white man to know that the red man has great heroes, too,” Henry Standing Bear wrote Polish-American architect Korczak Ziolkowski in 1939.

Who Paid For The Crazy Horse Memorial?

The Lakota chief not only traded his 900 acres of land for the desolate mountain with the Department of Interior, but continuously rejected federal funding in utter aversion to government involvement. Construction finally began in 1948 — and the fact that Ziolkowski worked on Mount Rushmore and Crazy Horse would become an ironic cherry on top.

As it stands, the project remains a private endeavor. Run by Ziolkowski’s daughter Monique, the Crazy Horse Memorial Foundation is determined to complete the towering monument at all costs. As of now, it’s funded entirely by private donations and admission sales to the thousands of tourists who visit every year.

When Is The Crazy Horse Memorial Supposed To Be Finished?

Ziolkowski toiled alone, reaching the top of Thunderhead Mountain with a 741-step staircase made of wood and working without electricity. His vision was to depict Crazy Horse on his steed, pointing to the land where so many of his men had been killed. Ziolkowski believed it would take him 30 years — but he never finished.

When the architect died in 1982, his wife, Ruth, took over and made slight alterations to the design. She opted to sculpt the face first rather than the horse, believing it would draw in tourists she could charge to continue finishing the project. With the help of her seven children, the face was completed in 1998. 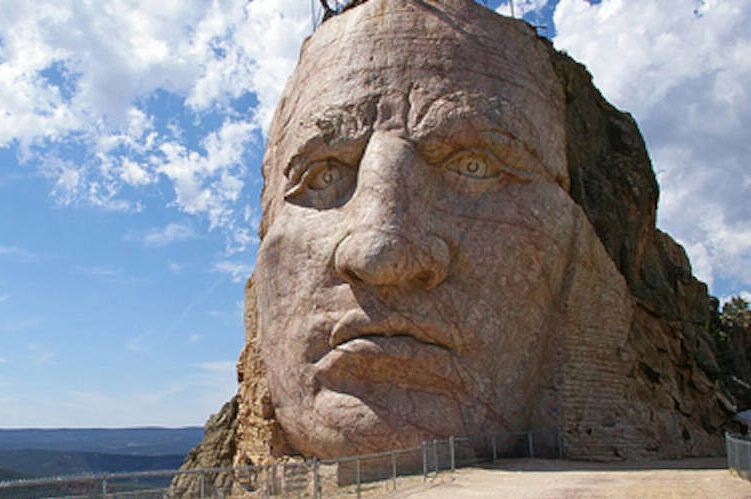 Henry Standing Bear would likely have been pleased to see that his idol’s face is 27 feet higher than those of Mount Rushmore’s presidents. Ultimately, the monument remains incomplete, and is actually not based on any known imagery of Crazy Horse — but an artistic representation of the man.

If finished, it will be the second-largest monument in the world — behind only the Statue of Unity in India. But when will the Crazy Horse Memorial be done? As of now, it’s impossible to say.

After learning about the Crazy Horse monument, read about the Confederate memorial of Stone Mountain Park. Then, learn about the tragic true story of legendary Apache warrior Geronimo.