Inside The Bloody Story Of Defenestration, One Of History’s Wildest Execution Methods

Although executing someone by throwing them out a window may seem like a bizarre concept, it was once popular enough to acquire its own word: defenestration.

When people use the word “defenestration” today, they usually mean it metaphorically, referring to removing someone from a position of power, especially public leaders.

In 2017, for example, when The Atlantic published an article titled “The Strange, Slow-Motion Defenestration of Jeff Sessions” about the fall from grace of the then-U.S. attorney general, they didn’t mean it literally. 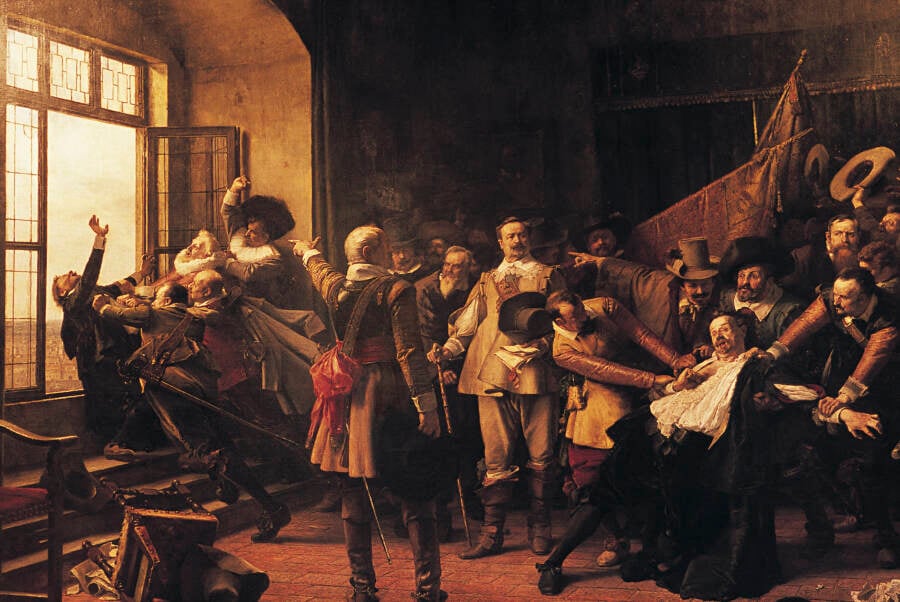 Christophe Boisvieux/Corbis via Getty ImagesThe most famous instance of throwing people out of windows is the Defenestration of Prague in 1618 that sparked the famous Thirty Years War, shown here in a 19th-century painting painting by Václav Brožík.

Because while the word may be a useful — if grandiloquent — way to describe a swift dismissal from power, to defenestrate someone also means to literally throw them out of a window. In fact, defenestration has a long and bloody history as a way to get rid of unwanted rulers or political enemies, execute criminals, and add some cinematic drama.

We’ve witnessed it in countless movies — the thrilling opening fight scene in Watchmen, Edward Longshanks hurling his son’s lover through an open window in Braveheart, even the triumphant moment in Robin Hood: Prince of Thieves when Friar Tuck pushes the money-laden bishop through the stained glass window of his chapel.

Learn more about the very bizarre true origins behind the practice of defenestration.

What Was The Original Definition Of Defenestration?

The definition of defenestration comes from the Latin word de, meaning “out of” or “from,” and fenestra, meaning “window.” But its origin comes from an incident in Prague in the Kingdom of Bohemia (part of today’s Czech Republic) in 1419.

That July, a group of anti-Catholic rebels called the Hussites marched upon the New Town Hall in Charles Square, demanding the release of some fellow Hussites who were prisoners.

When the city’s Catholic officials refused the request and someone hurled a stone at the Hussite leader, Jan Želivský, the Hussites angrily stormed the hall, dead set on throwing someone out a window. They settled for seven city council members, a judge, and the chief magistrate. 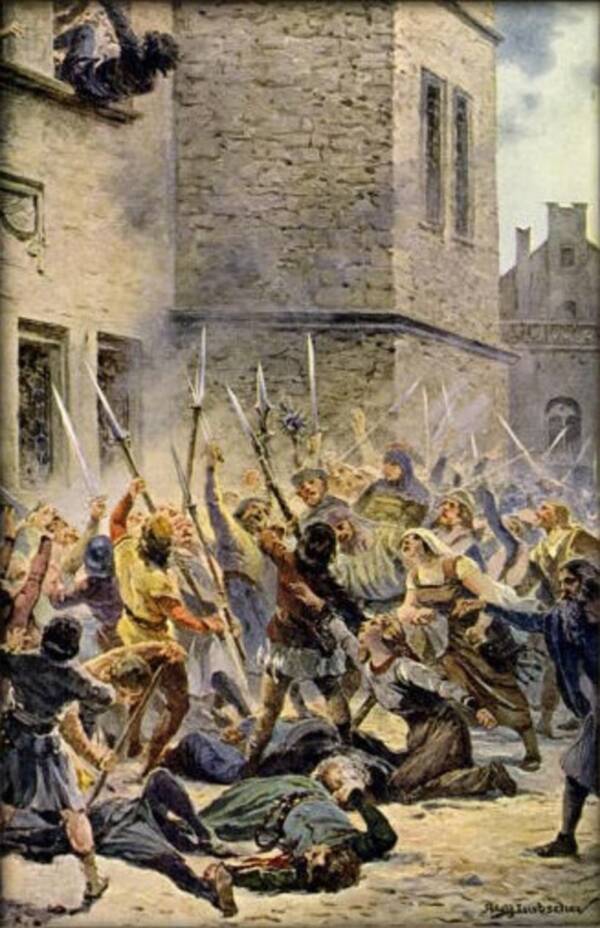 Public Domain“The overthrow of the aldermen from the New Town Hall” showing the First Defenestration of Prague on July 30, 1419, by Adolf Liebscher (1857-1919).

As if that wasn’t bad enough, the furious mob gathered below the windows held up spears for the defenestrated men to fall upon. Those who weren’t killed by the fall were hastily dispatched with the spears.

Almost exactly 200 years later, it happened all over again.

Known to history simply as the Defenestration of Prague — although it was, of course, the second defenestration to plague the city — the 1618 act was fuelled by the religious altercation between the protestant Bohemian aristocracy and the ruling Catholic Hapsburgs.

On May 23, Protestants stormed Prague Castle and decided to defenestrate three Hapsburg regents out of the windows of Wenceslaus Hall, eventually triggering the Thirty Years War.

Amazingly, the regents survived the 70-foot drop. Their Catholic supporters instantly claimed divine intervention, insisting the men had been miraculously caught by the invisible hands of the Virgin Mary. The generally accepted explanation is far less holy — namely that the men survived because they landed on a large pile of dung, serendipitously situated beneath the window.

So, where did the inspiration to start throwing people out of windows come from? According to Ota Konrad, a Czech historian at Charles University in Prague, “The inspiration for defenestration comes from the Bible, in the story about Jezebel, who was thrown from the window by her people. Defenestration was a very symbolic execution: It is about falling from high to low, symbolising a fall from grace.”

How Defenestration Has Been Used Around The World

It wasn’t just Prague that practiced the strange art, as there were defenestrations in many other medieval cities.

In Scotland in 1452, the Eighth Earl of Douglas was ruthlessly defenestrated by King James II. Incensed at the earl’s refusal to pull out of a pact that he’d made with other noblemen, the king reacted by stabbing him 26 times before throwing him out of the window of Stirling Castle, according to Scotland’s Daily Record.

Just over a century later, there was an incident in the Mughal Empire. In May 1562, seven months after Mughal Emporer Akbar appointed a favored courtier named Ataga Khan to be his first minister, a disgruntled general named Adham Khan murdered him at the royal palace. Enraged, the emperor ordered an executioner to defenestrate Adham Khan. 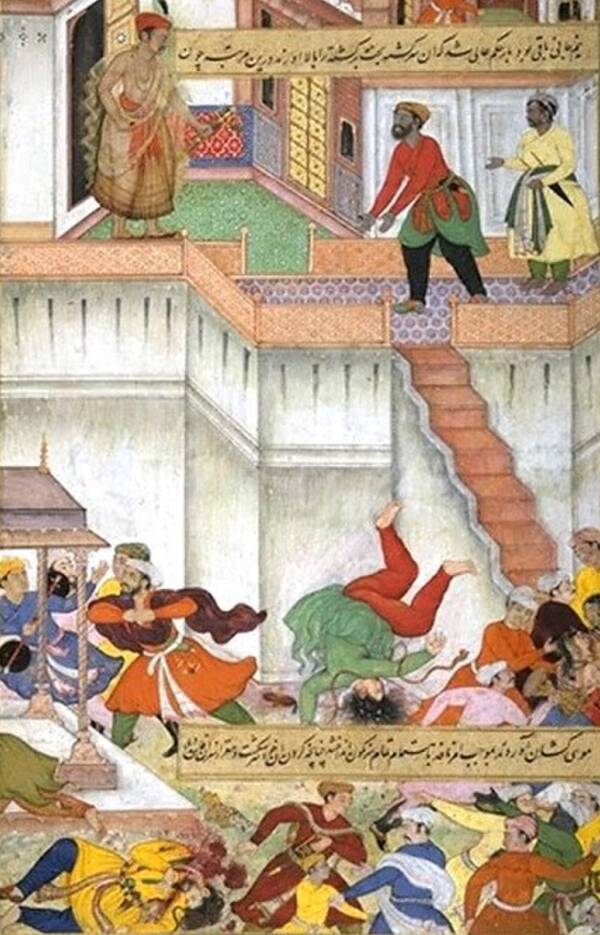 Public DomainA painting from the 16th-century Akbarnama showing the defenestration of Adham Khan on the orders of Emperor Akbar.

According to History of Yesterday, on May 16th, 1562, Adham Khan was defenestrated from the ramparts of Agra Fort. When the 40-foot fall only shattered his legs without killing him, the emperor ordered his men to march him back up to the top and defenestrate him a second time.

On being told, Adham Khan’s mother, Maham Anga, nurse to Emperor Akbar, graciously uttered, “You have done well.” Very loyal words indeed from the mother, but not entirely heartfelt. Anga is said to have died of acute depression 40 days later.

Perhaps the most alarming aspect of the tradition is that it didn’t die out in the Middle Ages. In fact, it has continued to surface into the 20th century.

Throwing People Out Of Windows In The 20th Century

Nigeria saw a horrific display of defenestration in 1977 when soldiers threw the mother of musician and human rights activist Fela Kuti out of the window after taking umbrage with her son’s new Afrobeat album, Zombie, which criticized the military.

And as if her death wasn’t brutal enough, the commanding officer also defecated on Kuti’s mother’s head and then burned his entire compound to the ground.

There is also ample historical evidence to suggest that global Communist parties have been prone to use the occasional window shove to deal with opposition.

During the Chinese Cultural Revolution of 1968, Deng Pufang, the son of former communist leader Deng Xiaoping, was tortured and forced to admit to capitalist sympathies.

As a result, Chairman Mao Zedong’s guards imprisoned him and threw him out of a fourth-story window at Peking University, according to The Los Angeles Times. The fall didn’t kill him, but he was refused admittance when he was taken to the hospital. The fall broke Pufang’s back, and he remains paralyzed in a wheelchair to this day. 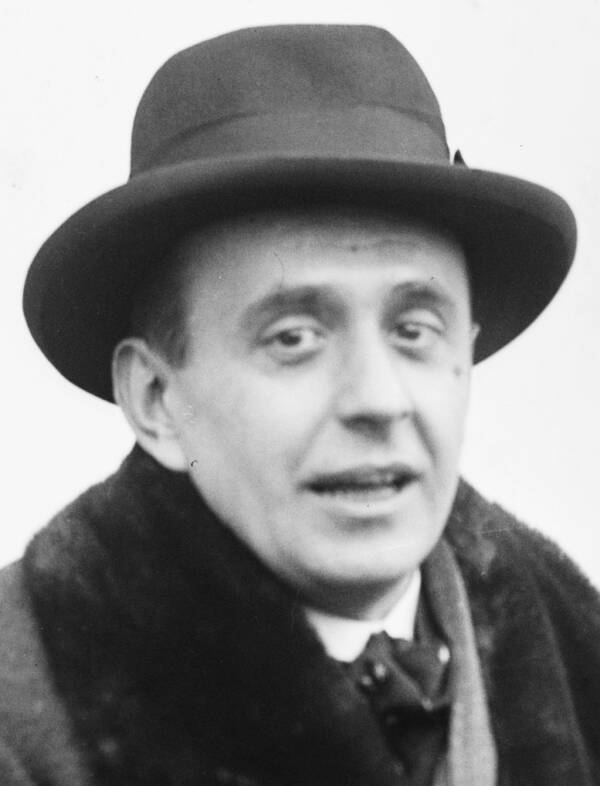 Library of CongressUntil a 2004 police investigation found that Czech foreign minister Jan Masaryk had been murdered in 1948, he stood accused of “self-defenestration.”

Earlier, in 1948, there was a controversial episode in what was then Czechoslovakia that introduced a novel form of the ancient execution method. After the communists seized power in the post-war elections, the foreign minister, Jan Masaryk, was found dead in his pajamas beneath his bathroom window at the Černín Palace. The official verdict was suicide, or, since he fell through a window, “self-defenestration.”

But 56 years later, an investigation by Czech police concluded that it was, in fact, a murder carried out by the Communist government in what has since become known as the Third Defenestration of Prague, according to Radio Prague International.

This argument is based on three distinct pieces of evidence, according to the historian Ota Konrad. First, it would have been quite difficult for Masaryk to navigate the window ledge and throw himself out of that particular window. One Czech investigator reportedly quipped that “Jan Masaryk was a very tidy man — so tidy that, when he jumped, he shut the window after himself.”

Second, there was evidence of scratched nail marks on the window frame. And third, the pajamas taken from the crime scene showed that Masaryk had “soiled himself.”

And as yet another example of windows being used to bring about horrific death in Prague, Masaryk’s murder acts as a startling warning to us all: If you ever find yourself on a visit to the Czech capital, consider declining an offer to tour the top floors of any tall buildings.

Enjoyed this look at the history and definition of defenestration, the word for throwing someone out a window? Discover more about history’s worst execution methods. Then, learn about the eight most painful medieval torture devices.