Located deep within the Sahara desert is Desert Breath, an art installation so surreal you'll think aliens made it. 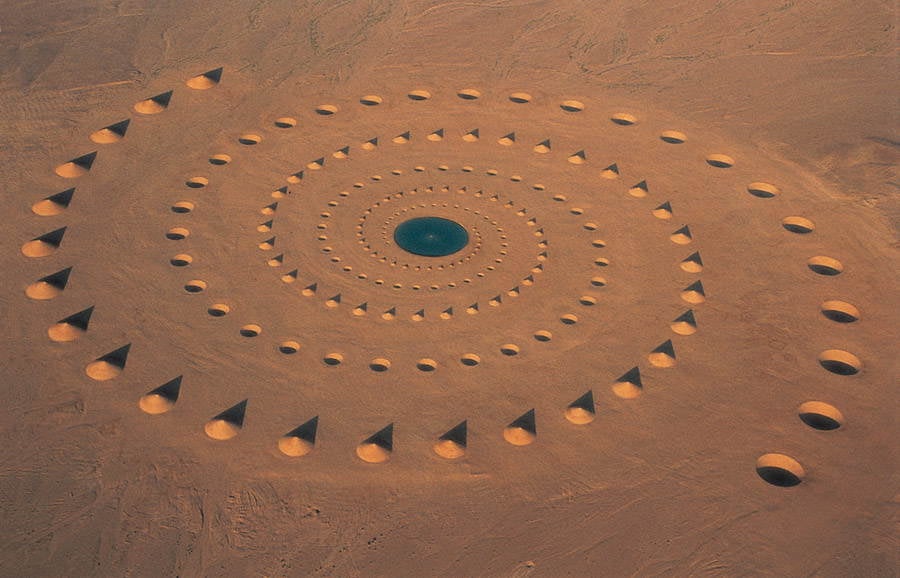 Near the coast of the Red Sea and thick within Sahara desert is a spiraling landmark known as Desert Breath. Given its impressive size and seemingly perfect symmetry, it would not be too irrational to think it was placed there by alien visitors.

But typically, when something on this planet seems alien, it just means that an incredible design team was behind it. The same can be said for Desert Breath. Seventeen years ago, the D.A.ST. Arteam, including Danae Stratou (the installation artist), Alexandra Stratou (the industrial designer and architect), and Stella Constantides (the architect) ventured into the desert to create art on an epic scale.

Though erosion is inevitable and has altered their work over the years, the site still looks remarkably similar to how it did upon completion. The slow deterioration has been said to be “an instrument to measure the passage of time”, and gives life and movement to an otherwise static work of art. 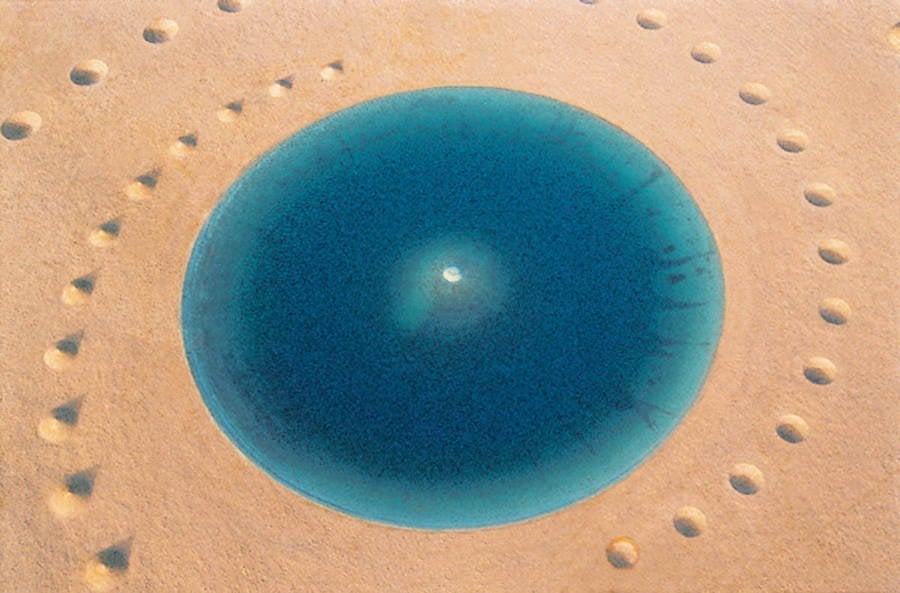 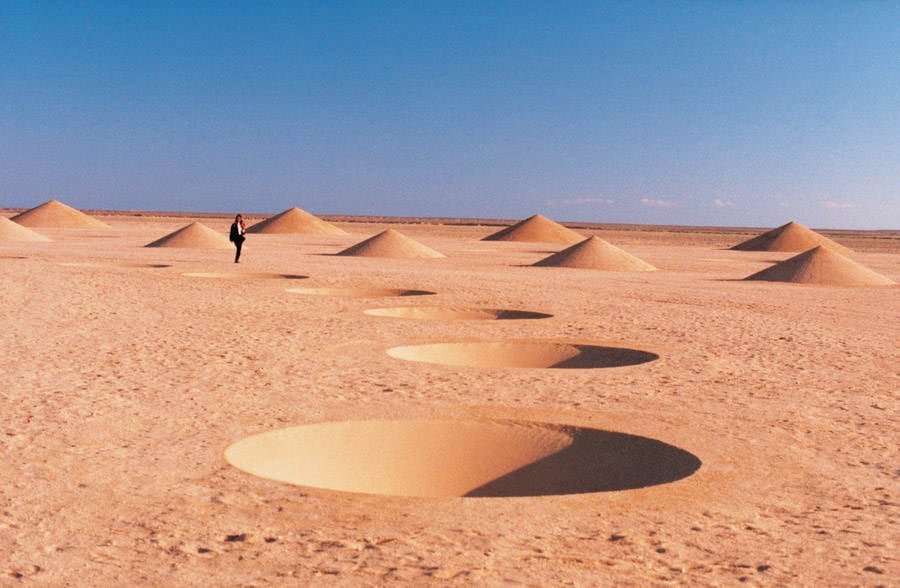 A favorite of those who like to seek out geographical oddities seen from space on Google Earth and other satellite maps, the Desert Breath installation is a wonder to behold. The environmental art installation is grand in both scale and vision. The construction was a massive undertaking in terms of excavation and geometry. 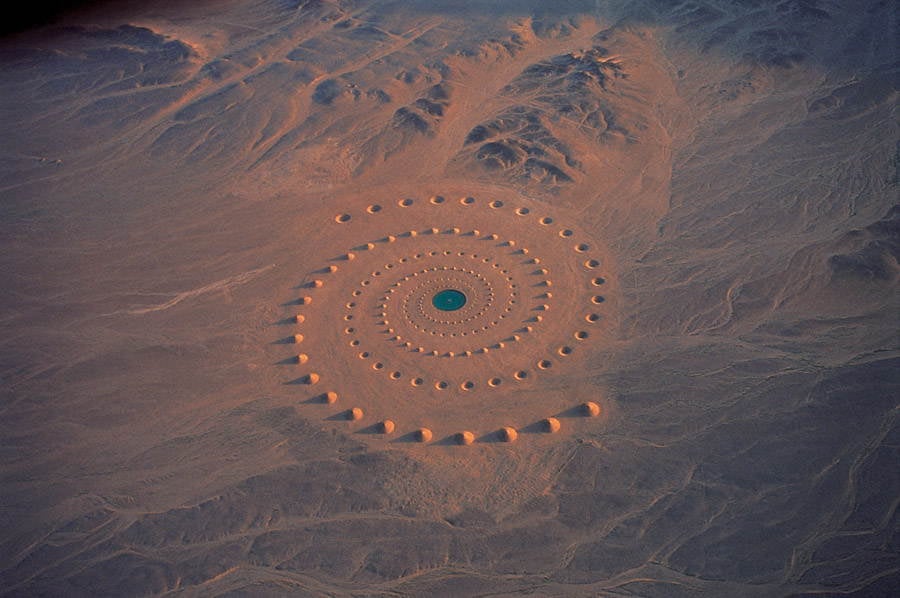 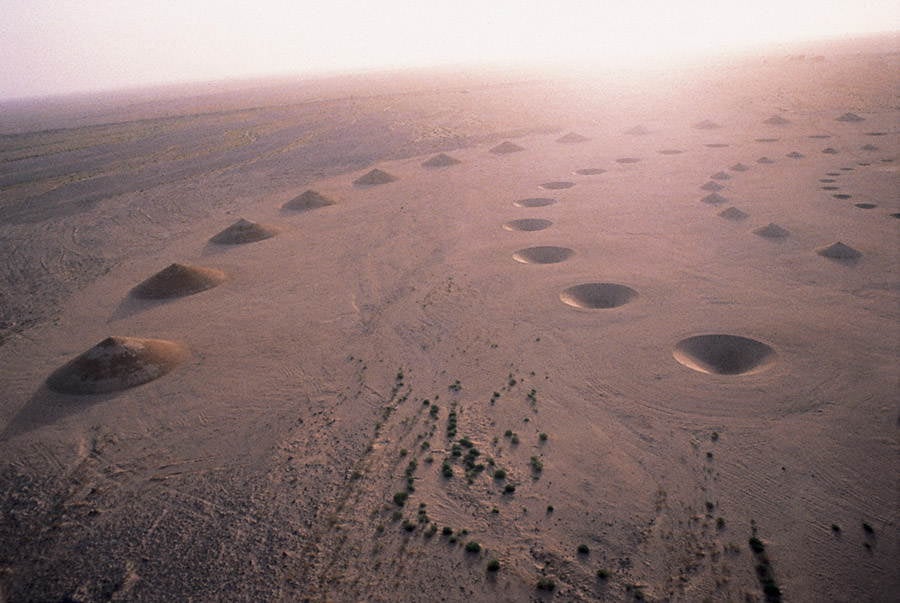 Constructed as two interlocking spirals that gradually increase in size—one has 89 conical depressions while the other features 89 vertical cones (made from the sand excavated from the depressions) in the desert floor—designers created Desert Breath by displacing over 280,000 square feet of sand and constructing a lake at its center.

Not immune from climatic patterns and change, in recent Google Maps images, the lake seems to have evaporated. The construction of Desert Breath was sponsored in kind by the Egyptian Orascom development company. 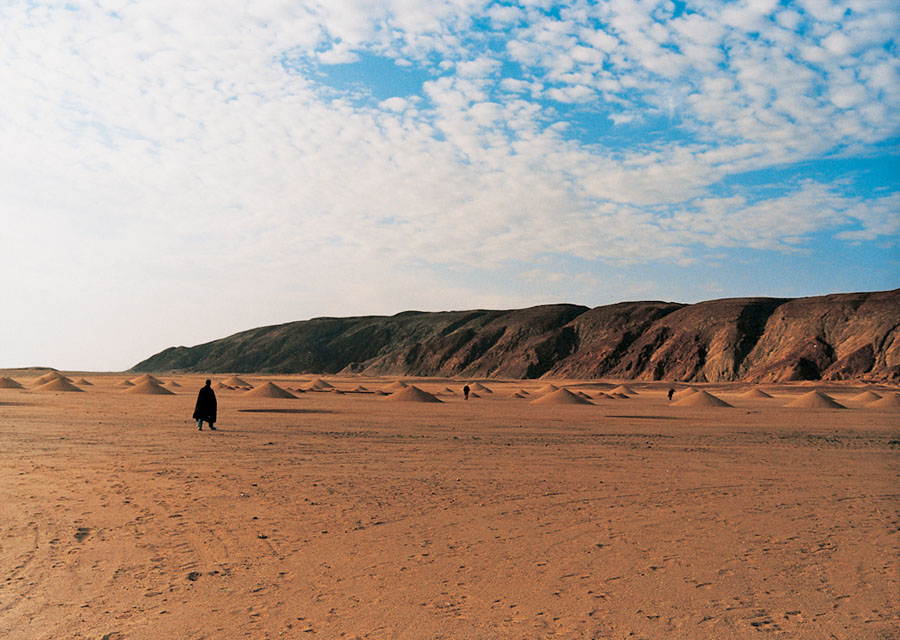 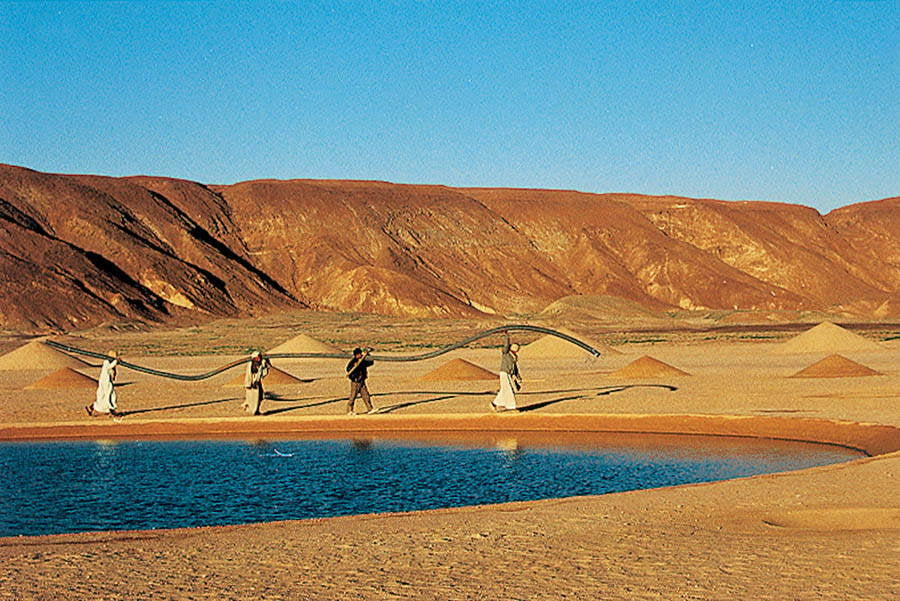 “The project is rooted in our common desire to work in the desert. In our mind’s eye the desert was a place where one experiences infinity. We were addressing the desert as a state of mind, a landscape of the mind. The point of departure was the conical form, the natural formation of the sand as a material.

Desert Breath expands in an area of 100,000 square meters, in the eastern Sahara desert bordering the Red Sea in El Gouna, Egypt. It is a site-specific work that generated out of our perception of the site itself. Its construction consists of the displacement of 8.000 m3 of sand formed so as to create precise positive and negative conical volumes. The conical volumes form two interlocking spirals that move out from a common centre with a phase difference of 180o degrees in the same direction of rotation. The centre is a 30-metre diameter vessel formed in a W-shaped section and filled with water to its rim.

Located between the sea and a body of mountains at the point where the immensity of the sea meets the immensity of the desert, the work functions on two different levels in terms of viewpoint: from above as a visual image, and from the ground, walking the spiral pathway, a physical experience.” 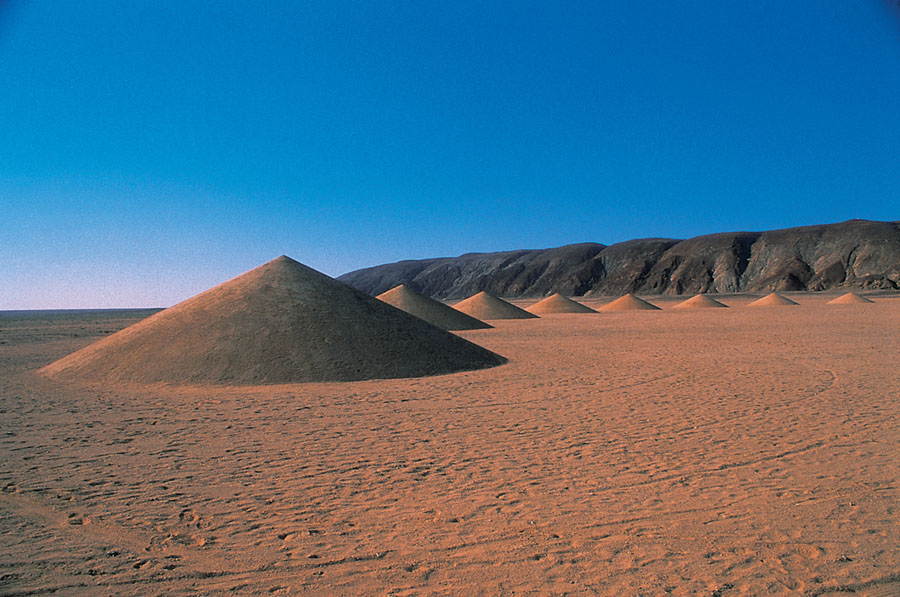 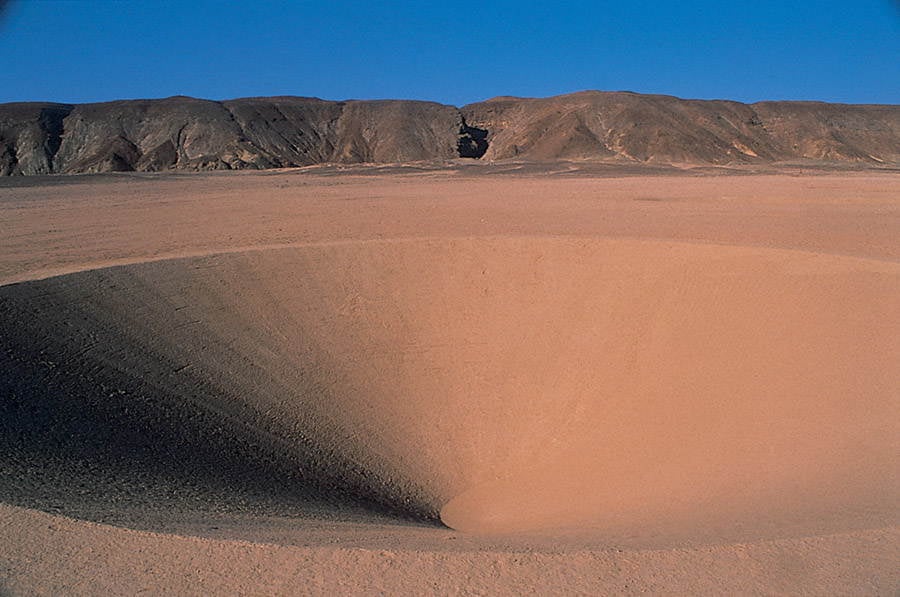 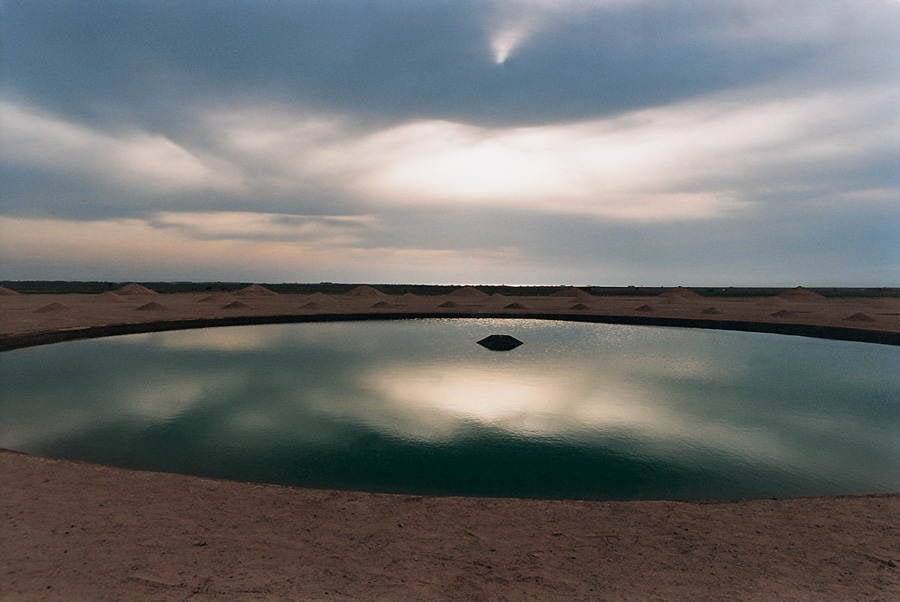 “I imagine two parallel realities in the way that we view the world. There is the world inside and the world outside of us. It is through the senses that we are able to connect the inside to the outside world. My whole life, including the choice to become an artist, has been an attempt to re-search, to understand, and to connect these two parallel realities. To bridge what is within to what is without…” 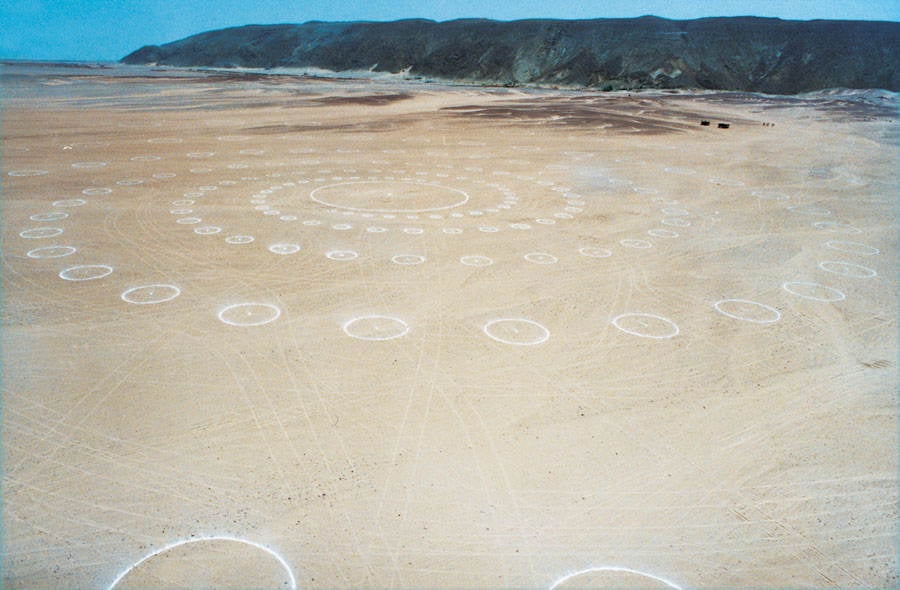 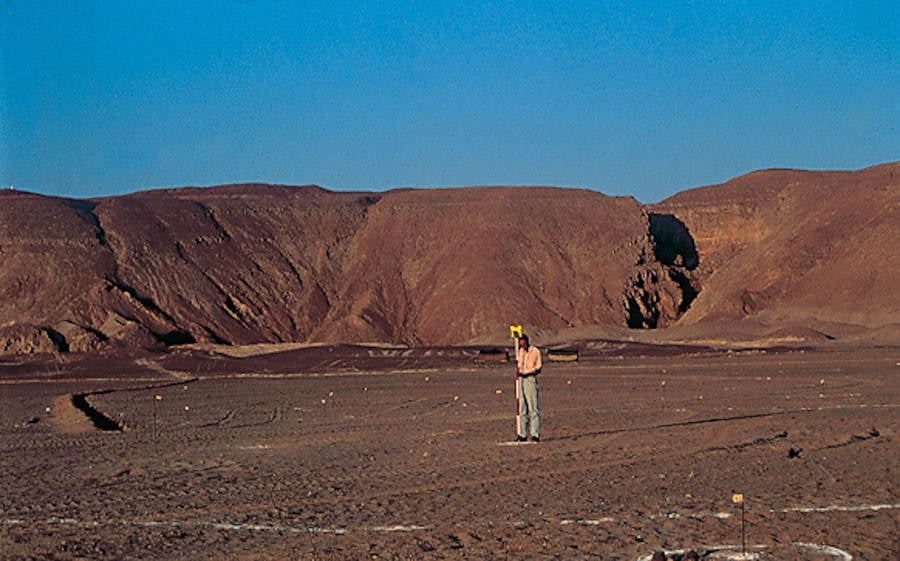 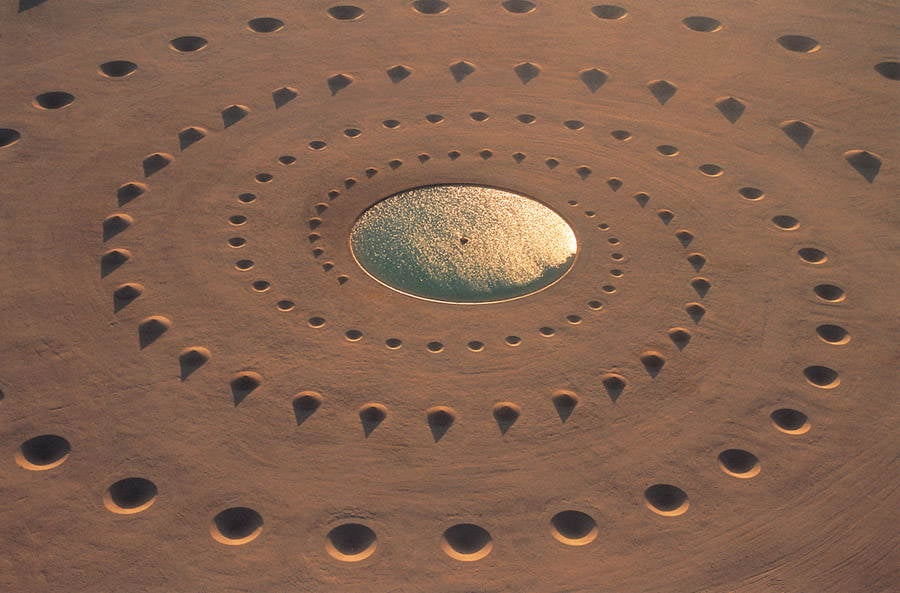