In Nepal, Every Dog Has Its Day. Literally. 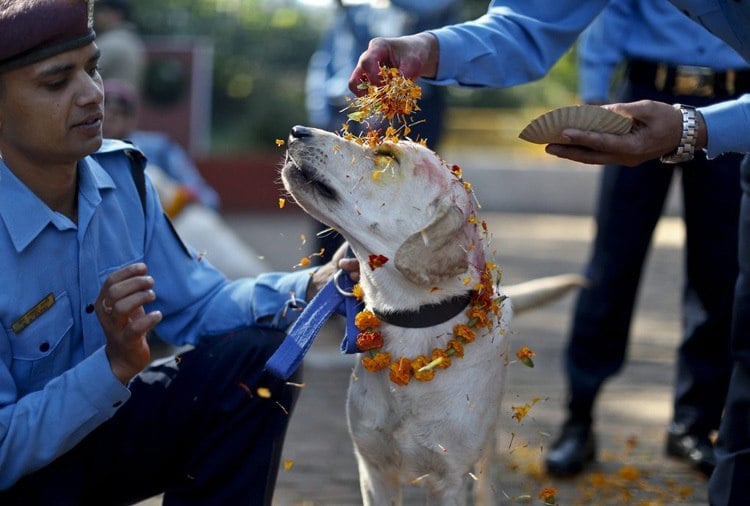 Most dog owners would do just about anything for their canine companions. In Nepal, Hindu populations take that affection to another level.

Coinciding with the traditional Hindu festival of Diwali, the people of Nepal reserve the second day of the annual five-day Tihar Festival to honor man’s best friend. On this day — called Kukur Tihar, or “worship of the dogs” — participants pay tribute to the divine attachment between humans and their faithful, four-legged companions.

Dogs play a significant role in Hindu mythology. Sarama — the mother of dogs — assists the ruler of Heaven, with dogs guarding the gates to the afterlife. Thus during the festival, all dogs – even strays – enjoy special treats, are decorated with malla (garlands of marigold), and colorful head markings to denote their sacredness. The markings, called tika, also serve to bless all who encounter the dog.

Dogs aren’t the only animals honored during the festival, though. Worshipers also pay tribute to cows (which signify wealth and prosperity) and crows, to which people make food offerings in order to deter sadness, grief and to banish death from their homes.

The festivals of Tihar are meant to commemorate not just the sacred bond humans hold with their creator, but also the divine in our relationships with living beings on Earth — something of which we should all take note from time to time.

This year, the Tihar Festival begins on November 9th. In the meantime, enjoy these photos of Kukur Tihars past: 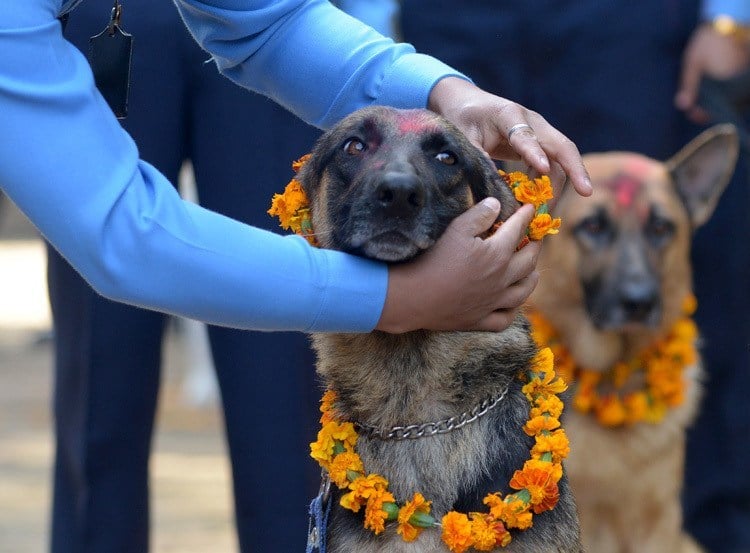 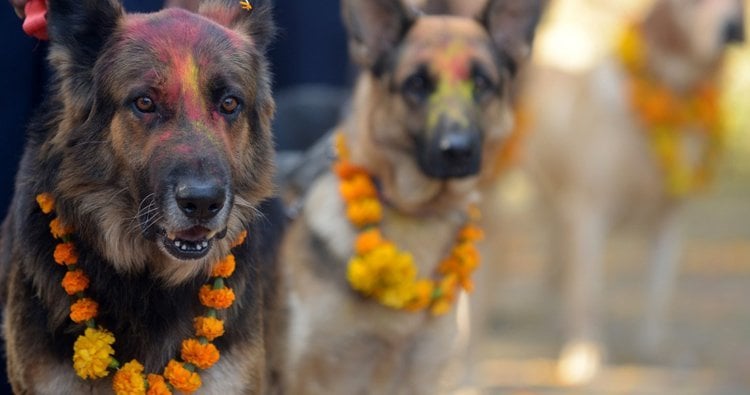 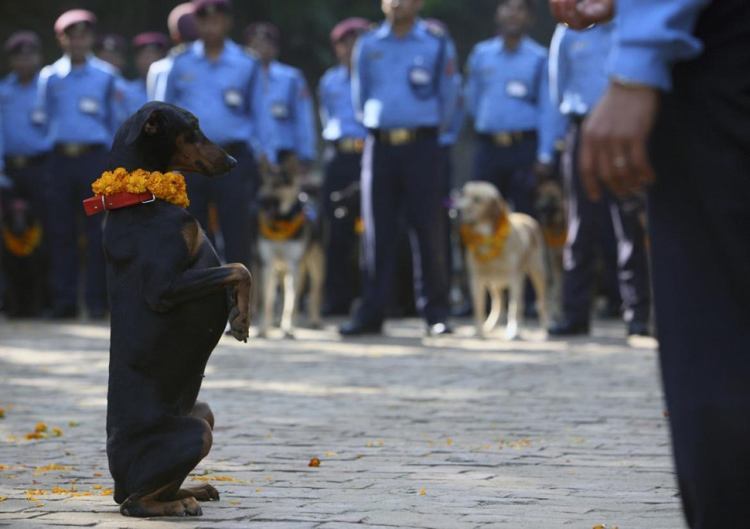 This jaunty little guy joins the police dogs in putting on a show. Source: Imgur 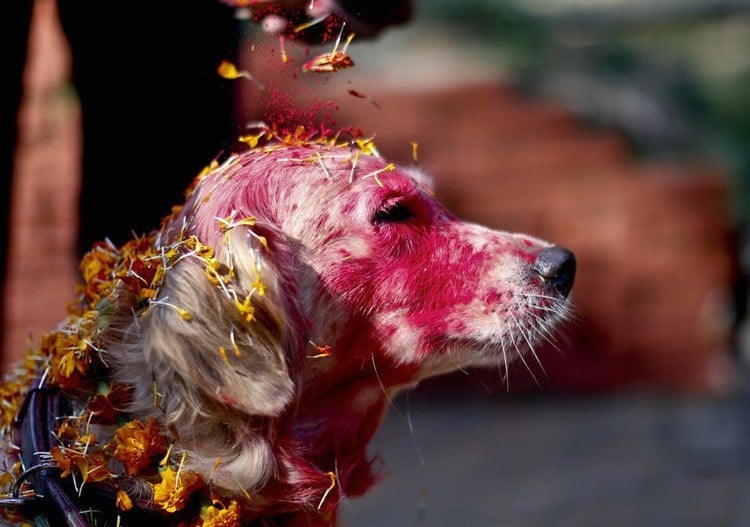 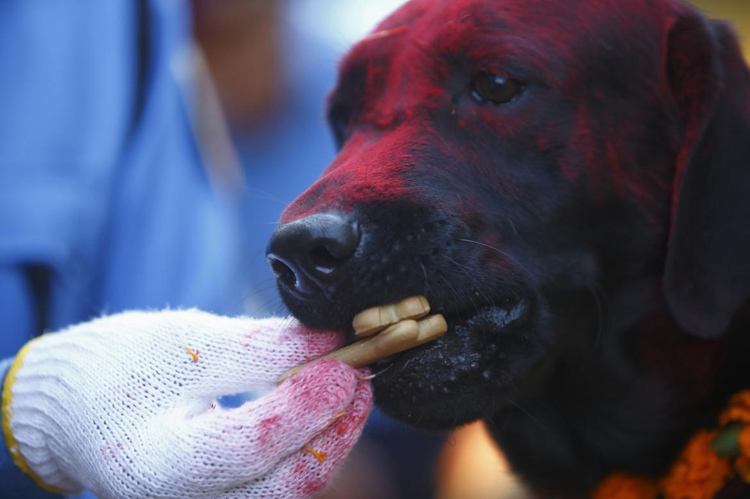 Here, patrons dole out special treats in what is likely the dog’s favorite part of the festival by far. Source: Navesh Chitrakar/Reuters 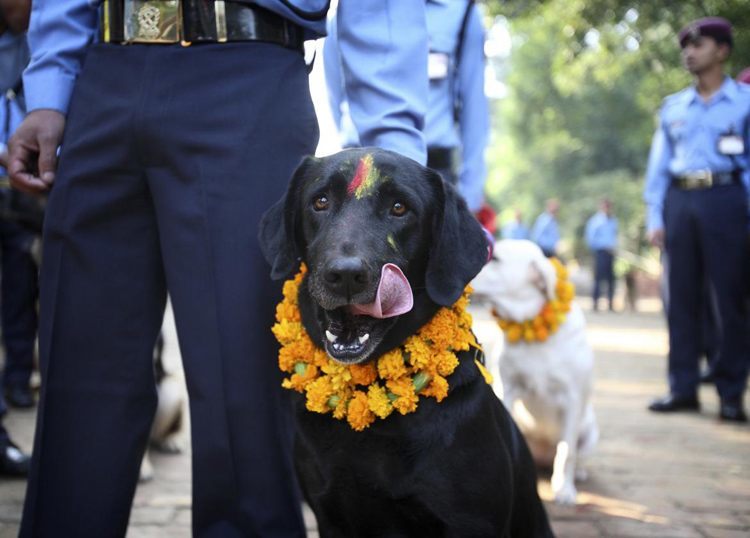 Perhaps this sweet guy’s mouth is watering at the anticipation of his treats. Source: Reuters 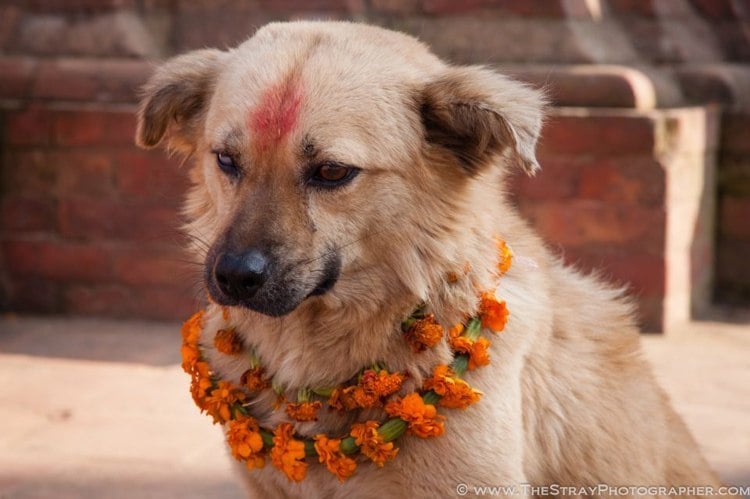 An almost reflective and reverent demeanor can be seen on this pup’s face. Source: The Stray Photographer 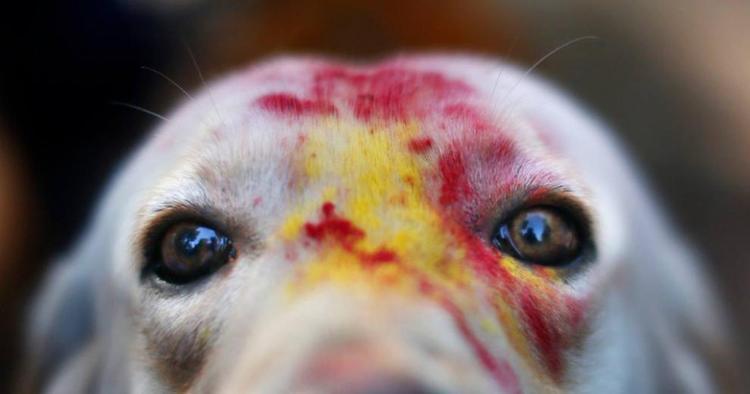 This dog practically lives the adage that the eyes are the windows to the soul. Source: Diaadia 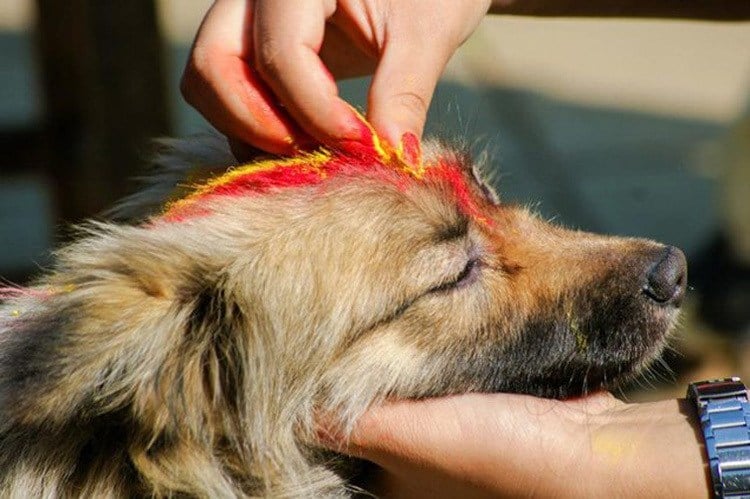 Applying the tika, in which powdered dyes are sometimes mixed with yogurt. Source: reddit 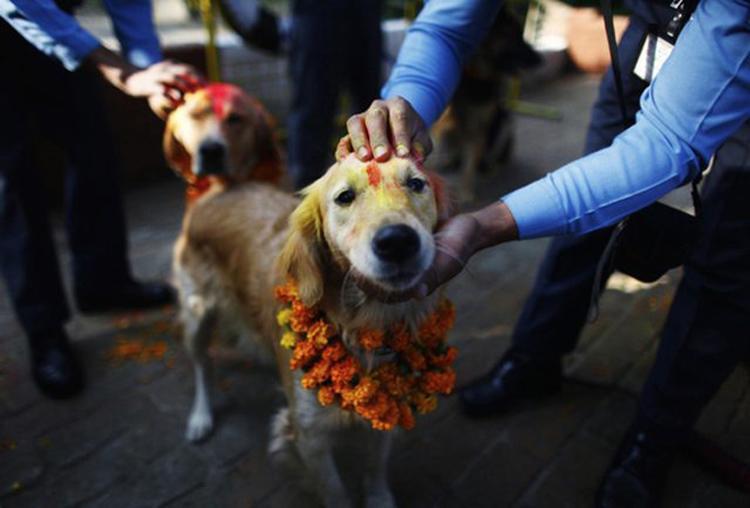 Who wouldn’t want to celebrate this cute face? Source: reddit 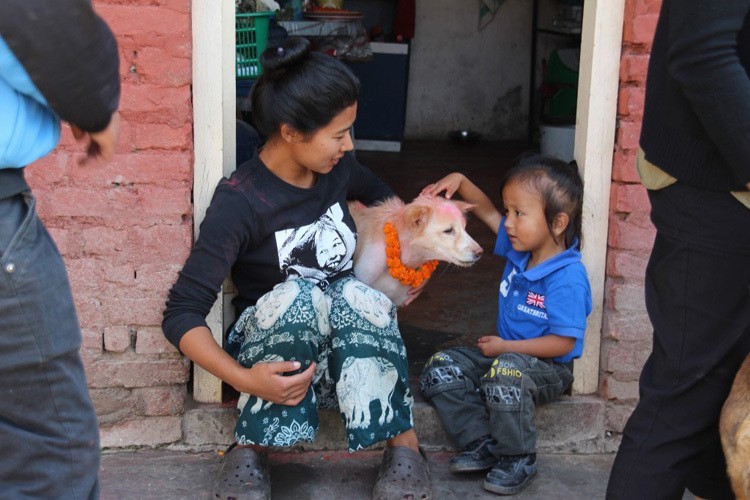 It must be uplifting to see so many appreciated dogs around the city; both strays and those with homes. Source: ofenmacher 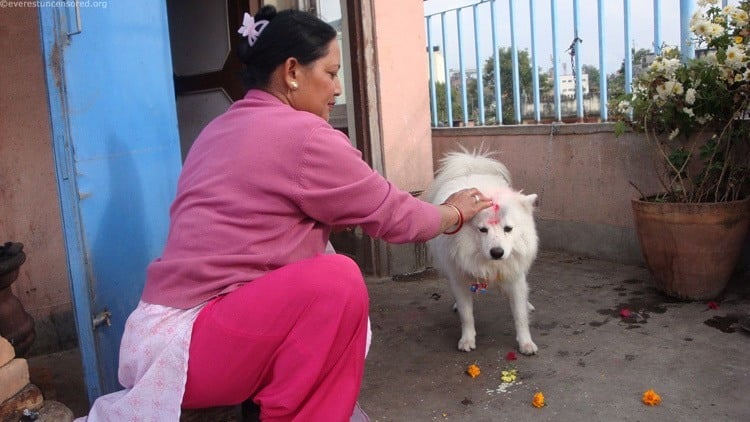 This fluffy pooch gets anointed on his porch. Source: Everest Uncensored 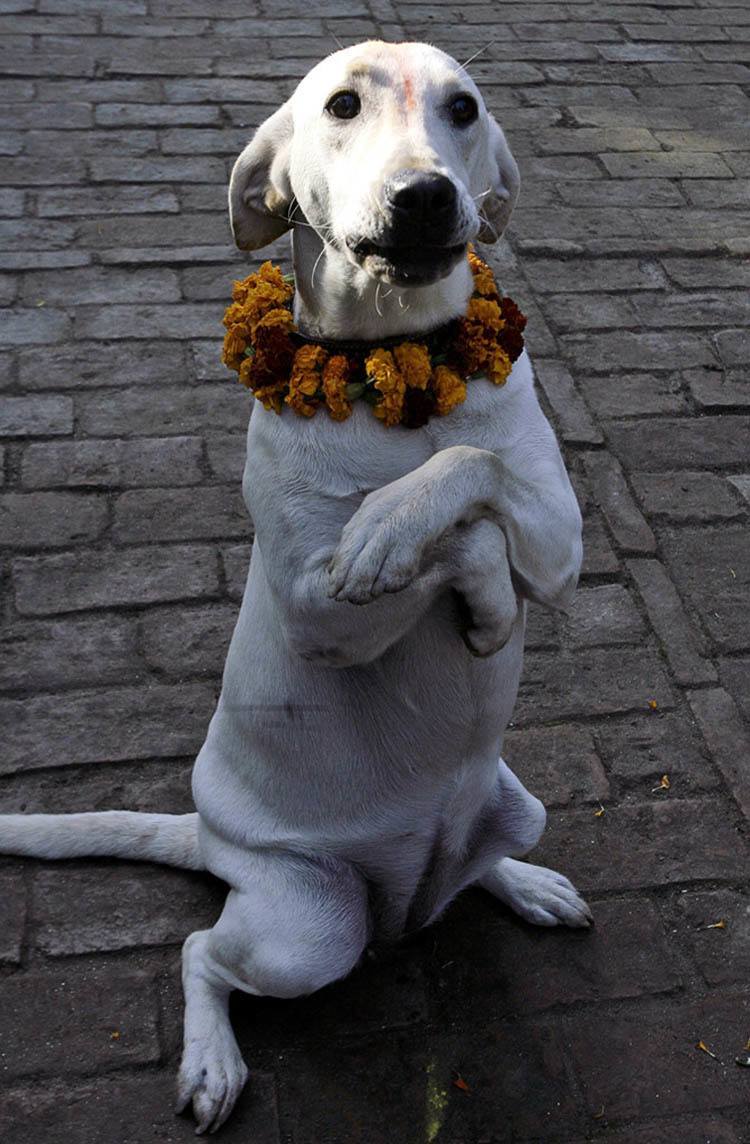 Man’s best friend deserves all the love and respect in the world, every day. Source: AP Photo/Binod Joshi