Though 17-year-old Kendrick Johnson's death was ruled accidental after his body was found inside a gym mat on January 11, 2013, many suspect foul play.

On January 11, 2013, the body of 17-year-old Kendrick Johnson was found in the most unusual of circumstances: upside-down and rolled up in a school gym mat. The mysterious death of Kendrick Johnson was initially ruled an accident by law enforcement, but his family was not convinced.

The initial autopsy revealed that Johnson died due to ‘positional asphyxia’ or that he suffocated as a result of being stuck upside-down in an enclosed space for an extended period of time. Just after 24 hours of being found, the investigators ruled Johnson’s death an accident. 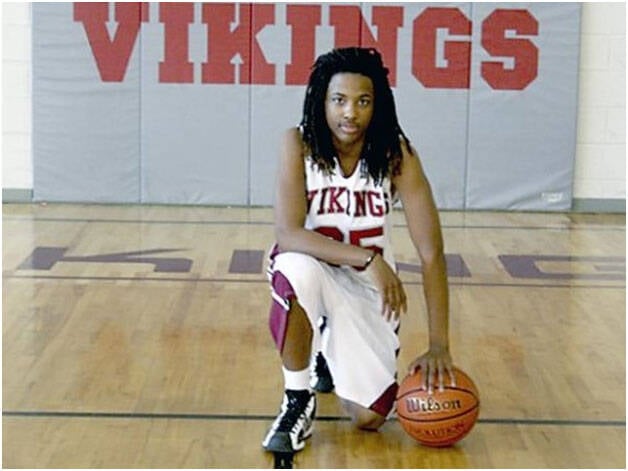 The Sheriff’s Department asserted that Johnson must have accidentally fallen into the center of the mat while reaching for a sneaker, which he had stored there so as not to have to pay for a locker.

But Johnson’s parents felt that his death was not being taken seriously, in part because of his race, or because a larger cover-up was at play.

The Mysterious Death Of Kendrick Johnson, The Boy In The Rolled-Up Gym Mat

Kendrick Johnson lived with his family in Valdosta, Georgia and attended Lowndes High School. His family and friends described him as a sweet and quiet boy. He was a three-sport athlete and dreamed of playing professional football.

But those dreams were cut short when his body was found by students entering the gymnasium rolled up in a standing gym mat. His sneakers were shoved behind his knees. But investigators quickly closed their case on the theory that Johnson had simply fallen into the mat while reaching for one of his sneakers.

Indeed, when the mat was first unrolled, Johnson did have one arm stretched above his head and the other down around his waist as though struggling for his shoe. He was just in his socks. Students had also told police that it was common for them to leave their belongings in the mats when they didn’t want to pay for a locker.

The mat in which Johnson was found was around six feet tall. When rolled up, the mat left a 14-inch hole in diameter in the center. Johnson’s shoulders measured 19 across and he was five feet, ten inches tall.

It seemed possible that if Kendrick was trying to squeeze into the center of the mat, he could have scrunched his shoulders together to make himself narrower. But his parents would later maintain that his size versus the size of the mat alone was enough to debunk the investigators’ case.

Almost a full day had passed until Johnson had been discovered. As he was upside down, blood would have rushed to Johnson’s head and he eventually would have begun to bleed from his facial orifices. 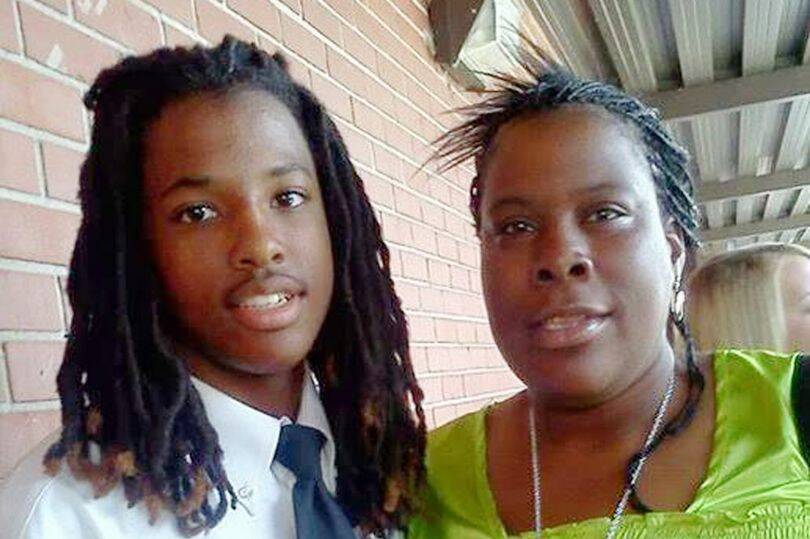 FacebookKendrick Johnson with his mother.

But this is one of the most baffling mysteries of this case: the black and white gym shoe that lay on the ground below Kendrick Johnson, the one he was presumed to be reaching for, was lying on top of a pool of blood, but there was no blood on the shoe itself.

A hoodie and a pair of orange and black gym shoes were also found lying on the floor of the gym, as well as traces of blood on the wall nearby.

Investigators tested the blood which revealed that it did not belong to Kendrick Johnson. They also reported that the blood had likely been there for a long time. Investigators did not take the hoodie and orange and black gym shoes into evidence.

Johnson’s parents were suspicious of the investigation from the beginning.

They believed that the Sheriff’s Department was too quick to rule out foul play as a cause for Johnson’s death, considering that within 24 hours of finding Kendrick Johnson’s body, they concluded that it was an accident.

The Johnsons were also sure that their son’s body had been moved, which was corroborated by Lowndes County Coroner, Bill Watson.

Georgia state law dictates that the coroner be contacted immediately on the discovery of a body, but Watson claimed that he was not notified until six hours later.

Furthermore, Johnson’s parents argued, if this was an accident, how could no one have heard Kendrick call for help in a high school of over 3,000 students?

Johnson’s parents finally believed that their son’s death was not being taken seriously because of his race.

Kendrick Johnson was black and the Lowndes County Sheriff, Chris Prines, and his investigators were all white. Indeed, in 2013, racism in Valdosta, Georgia, was still very much alive. The family’s attorney, Chevene King, expressed that if Kendrick had been white, the case would have been handled differently.

His Family Searches For The Truth 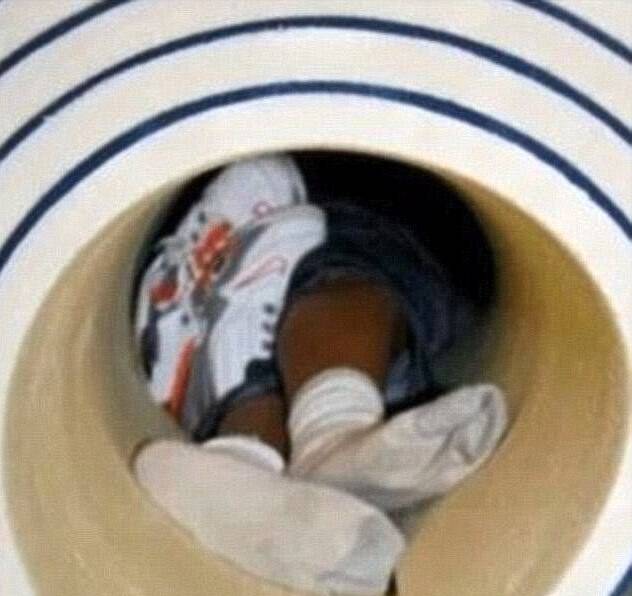 NY Daily News/Valdosta/Lowndes Regional Crime Labratory via CNNKendrick Johnson’s body rolled up inside the gym mat with his shoes behind his knees.

Kendrick Johnson’s parents released a photo to the media of their son’s face as he lay in the funeral home.

The photo, in which Kendrick Johnson’s face is extremely swollen, almost does not look human. The public was horrified by the photo and began to rally around the Johnsons in their quest for the truth.

On May 8, 2013, a judge granted Kendrick Johnson’s body be exhumed.

A private pathologist was hired to carry out a second autopsy. This time, the autopsy revealed that Kendrick Johnson had suffered hemorrhaging on the right side of his neck, which meant that he likely died from blunt force trauma. The pathologist concluded his death was not an accident.

On top of this, the second autopsy revealed that some of Johnson’s organs were missing and in their place, his body had been stuffed with newspaper. 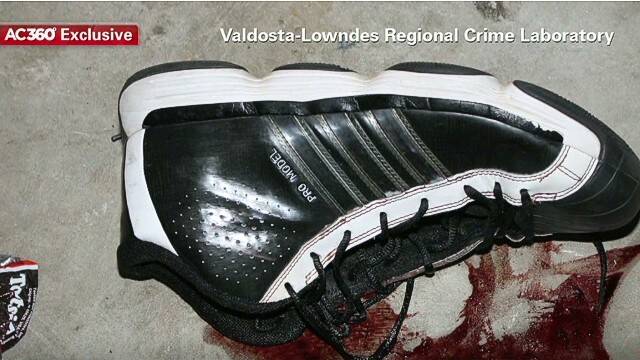 CNNKendrick Johnson’s shoe laying in the pool of blood.

The Georgia Bureau of Investigations (GBI) claimed that when the body was sent to the funeral home after the first autopsy, Johnson’s organs had been put back inside the body.

However, the coroner said these organs were not sent to the funeral home because they were too decomposed and were instead disposed of beforehand.

The funeral home said that it received the body without organs which it replaced with paper or sawdust as is common practice while embalming.

The Johnson’s did try to sue the funeral home for mishandling their son’s body, and perhaps having done so in order to cover up his true cause of death, but this case was dropped.

Regardless, the organs were lost and could not be tested during the second autopsy, which further aroused suspicions in Johnson’s parents that this was a cover-up.

As a result of this new evidence, Matthew Moore, the U.S. Attorney for the Middle District of Georgia, announced a formal review of the case.

The Johnsons hoped for a coroner’s inquest, which would begin the process of reclassifying the cause of Kendrick Johnson’s death as non-accidental and reopening the investigation. The request, however, was denied, even though the coroner Bill Watson had originally expressed a lack of confidence in the Sheriff Department’s handling of the case. 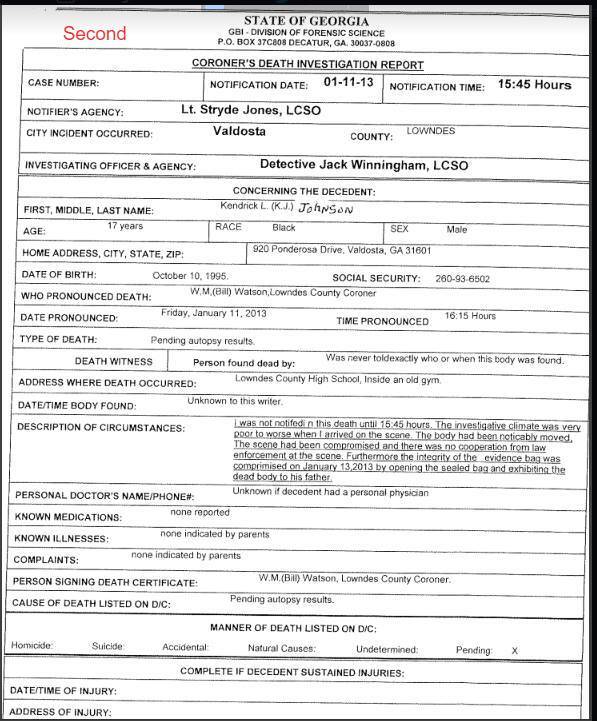 CNN gained access to the school’s security footage on the day that Kendrick Johnson was killed, but upon viewing it, realized that it offered little insight into what happened that day.

The cameras which faced the mats were unfocussed and skipped around. All that could be seen from the cameras was Kendrick Johnson walking towards the gym, and then several seconds of footage of him jogging within the gym. He was never shown within or leaving the gym and indeed, he never did show up for his following classes.

Furthermore, a whole hour of footage from the gym was missing, right at the time which would have shed light on what happened that day. This finding further increased the confidence of doubters that this death was an accident.

Then, in 2014, Kendrick Johnson’s parents filed a wrongful death suit against the school’s officials, alleging that Johnson had been harassed by a white student which went neglected by the school, perhaps due to his race.

Ebony.com described the murder of Johnson to have been at the hands of two white brothers, though they did not include names. The description of these brothers closely resembled that of Brian and Brandon Bell, who the magazine claimed had killed Kendrick because of a fight they had had over a year earlier which had escalated.

The Johnsons also accused the brothers’ father, an FBI agent at the time, of covering up the murder by manipulating the school and authorities involved in investigating Johnson’s death.

In 2015, the Johnsons filed a $100 million civil lawsuit against 38 people, including three of their son’s classmates, the school, the local crime lab, state and federal officials, five agents of the GBI, an FBI agent, and more. The parents asserted that the sons of the FBI agent killed Johnson and used their connections to cover up the investigation.

Johnson’s father, however, admitted that he had no hard evidence to back up any of these claims and the Johnsons had to drop the suit. They were sued for more than $850,000 in attorney fees and more than one million in defamation charges. They were ultimately ordered by a judge to pay close to $300,000 worth of lawyers’ fees to those they had accused with no evidence.

A Widely Unsatisfying Conclusion In The Case Of Kendrick Johnson

In June 2016, the Department of Justice announced no charges would be filed against anyone in relation to Kendrick Johnson’s death, considering there was “insufficient evidence to support federal criminal charges.”

As far as the feds were concerned, the case was officially — and finally — closed.

But Johnson’s parents would still not give up. 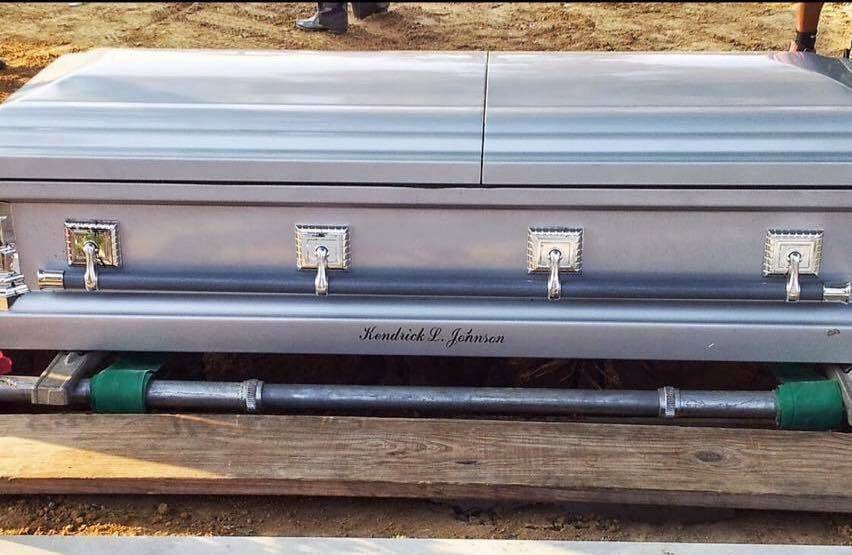 R.I.P Kendrick Johnson Facebook PageKendrick Johnson’s casket was unearthed for a second time for a third autopsy. His mother posted on her Facebook: “No mother or father should ever have to bury their child under these circumstances. We have buried kj 3 times and it felt like 3 funerals and i lost him 3 times.”

In June 2018, Kendrick Johnson’s body was exhumed for a second time and a third autopsy was performed. The findings of the second autopsy, that Johnson’s death was not accidental and caused by blunt force trauma likely due to being “struck in the neck with a 45lb dumbbell,” were confirmed.

Kendrick Johnson’s parents hoped that with the results of this third autopsy, the surveillance footage which they were convinced had been tampered with, and the mishandling of evidence at the scene, would be enough to reopen their son’s case.

It does appear, however, that their quest for answers has only led to more questions.

Reopening The Investigation After Eight Years

According to Lowndes County Sheriff Ashley Paulk, “If there’s questions — and they’re legitimate — I need to know the answers myself. The only way I’m going to know is to look at the evidence myself.”

Paulk and his team were able to secure a wealth of evidence from federal authorities, in part thanks to an appeal from Johnson’s family in November 2020. Now, the sheriffs have enough evidence in hand to perhaps allow them to solve this mystery once and for all.

Though Paulk said the investigation may take up to six months, both he and the Johnson family are optimistic that justice will finally be served.

After this sad look at the case and death of Kendrick Johnson, read up on another mysterious disappearance, that of Elisa Lam. Then, read about the horrifying murder of Emmett Till.