A beloved figure of Ghanaian folklore, Anansi is a spider god and a charming trickster who triumphs over larger and more powerful adversaries by using his wits alone.

The mythological figure Anansi may be unfamiliar to many Americans — but his DNA can be found virtually everywhere stories are told.

From elementary school lessons to American pop culture, the Ghanaian spider god has made a centuries-long journey from West Africa that spans almost the entire globe. In the American South, he inspired the beloved character Br’er Rabbit, and today, his eight-legged influence can still be found in none other than Marvel’s Spider-Man.

This is the true story of the original trickster spider, Kwaku Anansi: a cornerstone of African folklore, whose beloved stories still resonate today. 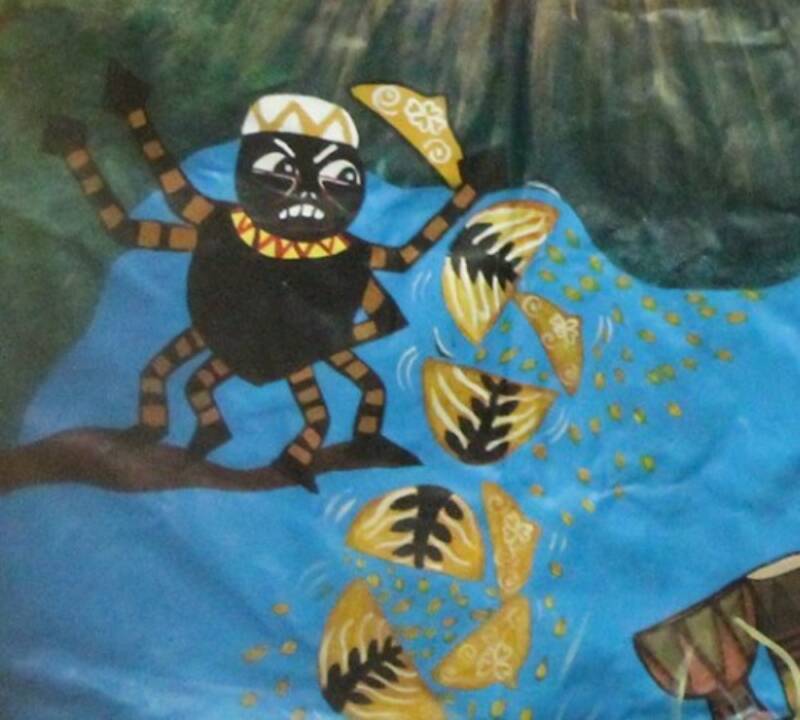 The tales of Kwaku Anansi originate in Ghana, in the western part of the African continent. The name Anansi, in fact, comes from the Akan word meaning “spider.” The spelling of his name can vary: while “Anansi” is an acceptable spelling, other spellings include Ananse, Kwaku Ananse, Kweku Ananse, and Anancy.

Depictions of Kwaku Anansi often vary even within Africa — though the most common in Ghana depict him as a man with eight legs.

Anansi has a family that looks like him, as well. His mother is Asase Yaa, who is worshipped as an Earth goddess by the Akan people of Ghana. He also has a wife and three sons.

Stories of Kwaku Anansi from Africa often paint him as a trickster, using his wit and cunning to outsmart even the most formidable opponents. For example, in one notable story, Anansi traps a particularly fierce leopard by digging a hole for the cunning cat, then binding his paws with his spiderwebs.

That wit and cunning would carry through the centuries in stories inspired by the spider god.

His cunning, in fact, is so legendary that it inspired a whole separate Akan word — Anansesem — that indicates a story too incredible to believe. Some of these Anansesem were later told to American children who watched Sesame Street and heard the character Maria narrate Anansi stories, as the legendary Ossie Davis voiced the African trickster god.

Kwaku Anansi came to the American shores thanks to the transatlantic slave trade, and in so doing, he entered into American folklore — and was later immortalized in pop culture.

Anansi The Spider-God And The Transatlantic Slave Trade 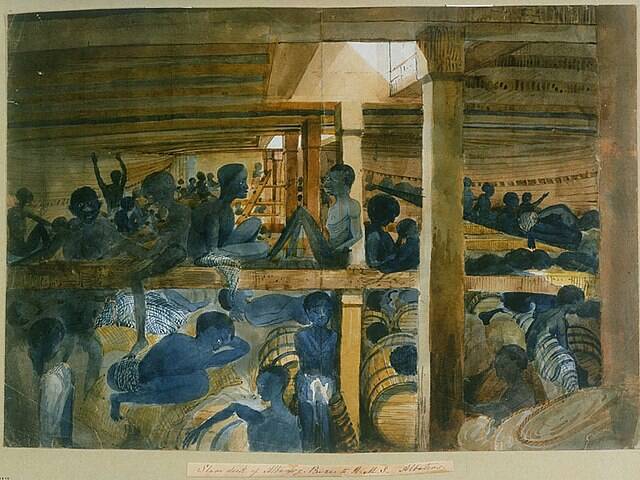 When the transatlantic slave trade ripped Africans from their homeland, many of their traditions and cultures died with their freedoms. But thanks to oral history and word-of-mouth — done in an attempt to keep their pre-slavery traditions alive — the story of Kwaku Anansi spread through the West Indies.

So, Kwaku Anansi originated in Africa, got transported through the Caribbean thanks to slave boats, then made his way back to Africa thanks to Jamaican revolutionaries. And, along the way, he made stops in South America, and in various Dutch-controlled Caribbean countries, including Aruba, Bonaire, and Curaçao.

Anansi’s travels thanks to the transatlantic slave trade were, in fact, referenced by a modern-day depiction of him in Neil Gaiman’s novel, American Gods. That element of the character would be brought to life again in the Starz television series by actor Orlando Jones. In both the novel and the show, Anansi — going by his New World name Mr. Nancy — makes reference to how he continues to be worshipped today thanks to “all the stories told about him.”

While Br’er Rabbit is, today, mostly associated with the racially problematic 1946 Disney film Song of the South, he was a folk figure whose origins took hold in the southern part of the United States, especially in states where slavery had a stronghold.

Like Kwaku Anansi, Br’er Rabbit uses his wit and skill to outsmart even the most fearsome opponent. In fact, many of the Br’er Rabbit stories from the slave era are nearly identical to the Anansi stories of Ghana. So, why the similarity? 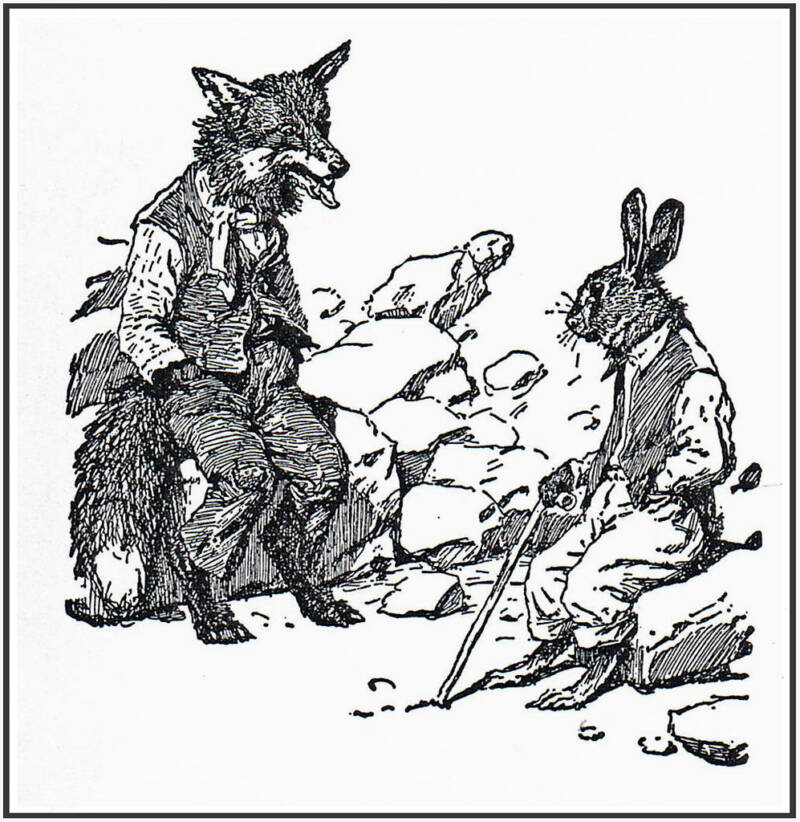 Plum Leaves/FlickrA page from a Br’er Rabbit children’s book, circa 1910. Br’er Rabbit was heavily inspired by the stories of Anansi.

In her book American Trickster, Emily Zobel Marshall explains that, in both the case of Br’er Rabbit and Kwaku Anansi, the “trickster” wasn’t just a mischief-maker. He was, in fact, a resistance figure whose stories of using brains over brawn gave hope to oppressed people who feared violence from their brutish, albeit not very bright, overseers.

“On the plantations, Br’er Rabbit, like Anansi in the Caribbean, functioned as a resistance figure for the enslaved whose trickery was aimed at undermining and challenging the plantation regime,” she writes.

“Yet, as Br’er Rabbit tales moved from the oral tradition to the printed page in the late 19th century, the trickster was emptied of his potentially powerful symbolism by white American collectors, authors, and folklorists in their attempt to create a nostalgic fantasy of the plantation past.”

Given the history of Kwaku Anansi as being small, yet ingenious, it’s almost impossible to look at Marvel’s beloved Spider-Man and not see the similarities between the American comic-book icon and the African tribal legend.

Whether “Spidey” is being played on the big screen by Tobey Maguire, Andrew Garfield, or Tom Holland, or featured in the beloved Amazing Spider-Man comics series, his origin story remains the same: He’s a slight, timid nerd and a “functioning neurotic” who gains enhanced senses and intelligence after being bit by a radioactive spider.

These enhanced senses lead Spider-Man to outsmart even the most brutish of villains like Doctor Octopus, The Sandman, The Green Goblin, and Venom, but his slight frame even makes him the subject of derision from other Marvel superheroes.

While the comparisons between the African trickster god and the Marvel character usually go unnoticed by the casual comics fan, those who are well-versed in African folklore are quick to draw similarities between the two.

Residing on Earth-7082 (an Earth in an alternate universe), this version of Anansi has a mix of personalities of both his African namesake and his American analog. Like the African deity, Kwaku Anansi is a trickster god whose cunning and wit earned him rank and respect. Like his American analog, he is a “functioning neurotic.”

Yet, ultimately, the Marvel universe confirmed — via a character named Ezekiel — that Kwaku Anansi was, above all else, “the first Spider-Man.”

Now that you’ve heard all about Kwaku Anansi and his spidery origins, learn about the banana spider, whose web is made out of the strongest material in the world. Then, check out the story of Papa Legba, a Haitian voudou figure featured on American Horror Story.