The Story Behind ‘Lunch Atop A Skyscraper,’ The Photo That Inspired Great Depression-Era America

"Lunch Atop A Skyscraper" was taken as a publicity stunt to promote the construction of the new Rockefeller Center, but it quickly became a symbol of hope for a struggling nation.

The iconic photograph, “Lunch Atop A Skyscraper,” has become synonymous with 1930s New York City. The photo features 11 construction workers casually having lunch while dangling 850 feet above the Big Apple, but few know the remarkable story behind the snapshot.

This is the little-known story of a photograph that came to define an era in New York City.

The Construction Of Rockefeller Center 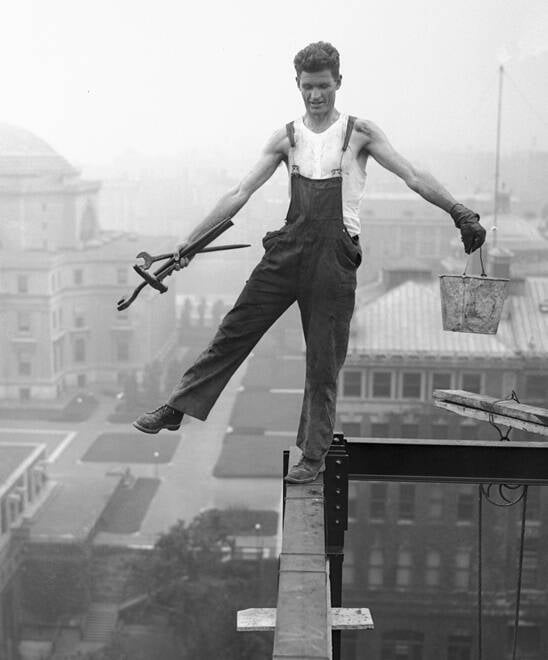 A popular misconception about “Lunch Atop A Skyscraper” is that it was taken on top of the Empire State Building. The image was actually captured atop Rockefeller Center during its construction.

At 850 feet above the city streets, Rockefeller Center — now one of the city’s most storied buildings — was a massive undertaking launched in the early 20th century. The project was considered remarkable not only because of its sheer size but also because of the economic impact it had on the local economy.

According to Christine Roussel, an archivist at Rockefeller Center, the construction project employed somewhere around 250,000 workers in the midst of the Great Depression.

But there was a catch: laborers had to work hundreds of feet above the ground and with little safety gear. Indeed, as John Rasenberger, author of High Steel: The Daring Men Who Built the World’s Greatest Skyline, put it:

“The pay was good. The thing was, you had to be willing to die.”

That notion is illustrated best by the photographs shot atop Rockefeller Center during its construction. The photos feature workers perched precariously on the skeleton of a skyscraper and their daily work appeared to be more like a death-defying stunt than an average 9 to 5.

But the most iconic of these photographs is no doubt the one of several workers eating lunch on a construction beam hovering hundreds of feet in the air with no obvious signs of worry.

Capturing “Lunch Atop A Skyscraper” 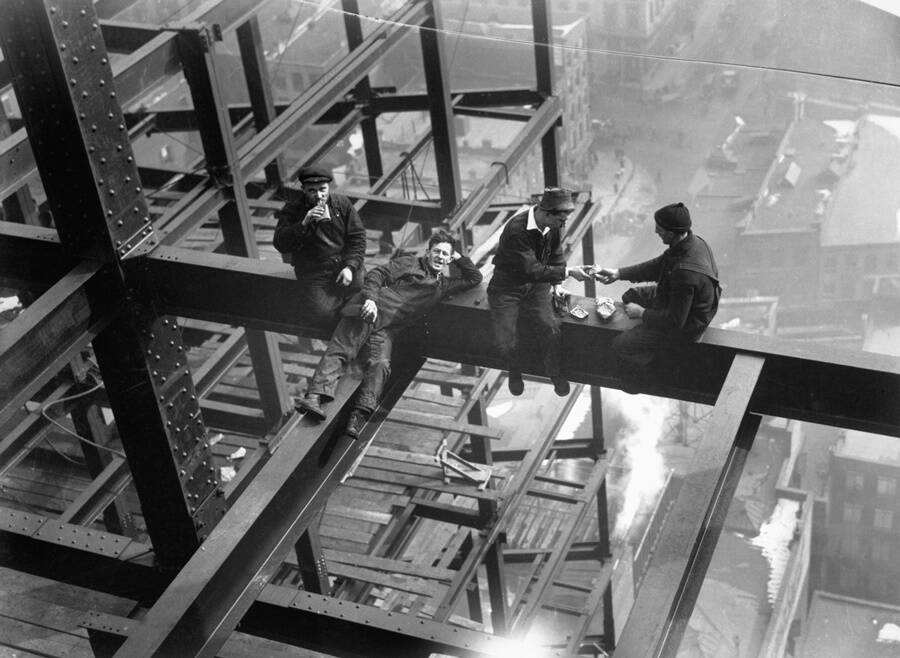 Getty ImagesConstruction workers relax on the beams of a construction building in New York City.

The photograph titled “Lunch Atop A Skyscraper” or “New York Construction Workers Lunching on a Crossbeam,” was taken 69 floors from the ground and was first printed in the New York Herald-Tribune on Oct. 2, 1932.

Backdropped by a spectacular view of Central Park, the photograph depicts New York City’s immigrant workers — who were mostly Irish and Italian but also Native American — as they break from their work building up the city in spite of the risks.

The photo immediately struck a chord with the American public. It was a stunning visual of hope and amusement for families desperate to put food on the table as the nation tried to rebuild following the financial ruin of the Great Depression. It also illustrated how the greatest city in the nation, the cultural hub of America, was built on and literally by a melting pot of international citizens.

The original photograph is now licensed under Corbis Images which holds the rights to some of the world’s most prized archives. Yet, “Lunch Atop A Skyscraper” is by far the photo service’s most recognizable image.

The 1932 photograph was part of a series of promotional stunt shots to advertise Rockefeller Center’s construction.

The casual way in which the workers seem to be chatting and enjoying lunch together while dangling in the air is certainly part of the image’s appeal, but this wasn’t actually a candid moment. The photograph was part of a deliberate campaign to promote the city’s real estate development.

Similar photographs exist, though they are not as well known as the lunch photo. One, for example, had some of the men posing as if asleep on top of the hanging beam and another featured a man hitching a ride on a stone block. 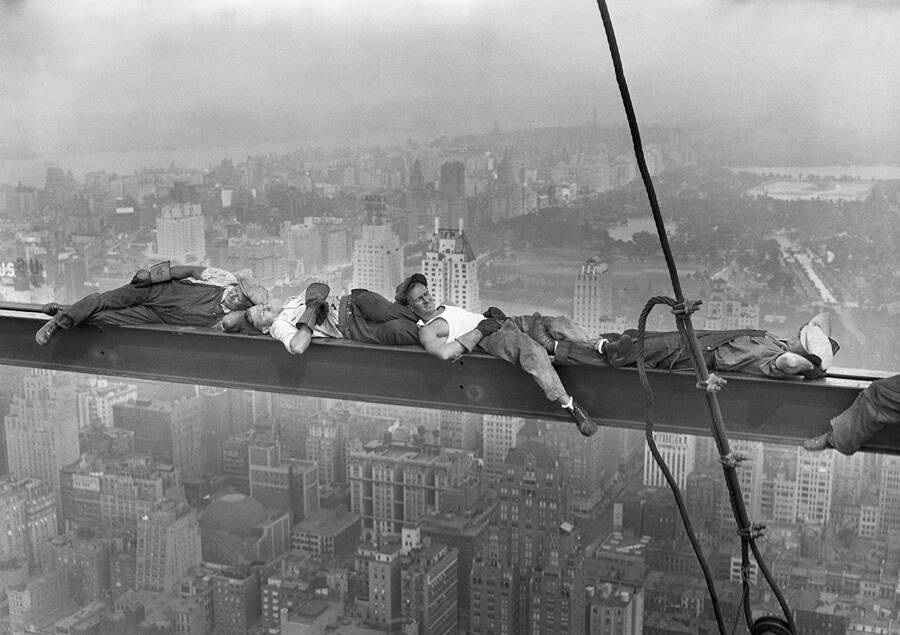 To this day, it is unknown who among them took the iconic photograph, but the photo itself has since been reimagined and replicated over the decades.

Solving The Mystery Behind The Photo

Trailer for the 2012 documentary Men At Lunch which tells the story behind the photo.

Despite the photograph’s infamy, much of the story behind it has remained unknown for so long that rumors began to spread that it was actually fake.

That rumor has since been debunked by filmmakers and brothers Seán and Eamonn Ó Cualáin in their documentary Men At Lunch which premiered at the 2012 Toronto International Film Festival.

The brothers were able to confirm the photograph’s authenticity by tracking down its original glass plate negative, which is kept at Corbis’ secure facility called Iron Mountain in Pennsylvania. 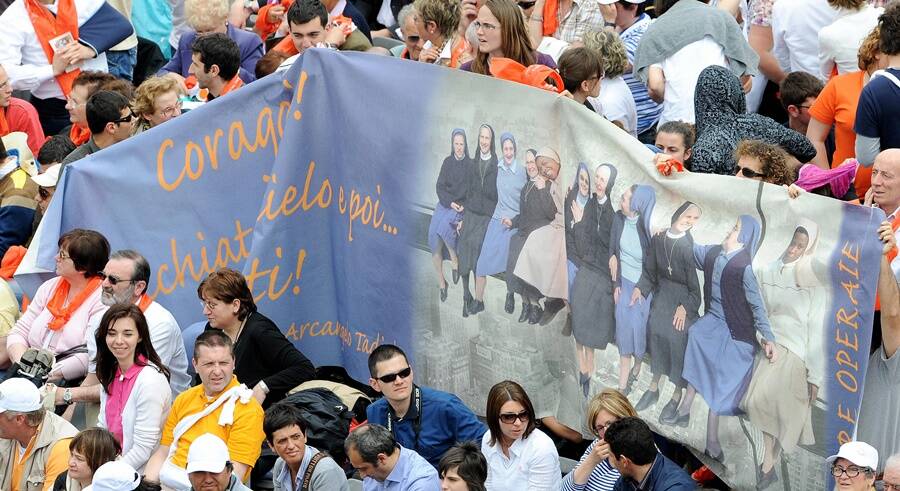 Alverto Pizzoli/AFP via Getty ImagesWorshippers recreate the photo using nuns during a canonization ceremony at the Vatican.

The Ó Cualáins first began investigating the photograph when they found a framed copy of it inside a village pub in Shanaglish, Ireland, where the brothers live.

The pub owner told the brothers that the photo was sent to him by Patt Glynn, a descendant of Irish immigrants who settled in Boston. Glynn believed his father, Sonny Glynn, was the man with the bottle at the far right of the photo, and his uncle, Matty O’Shaughnessy, was the man on the far left with a cigarette.

“With all the evidence they’ve given us and based on their own belief,” Eamonn said, “we believe them.” 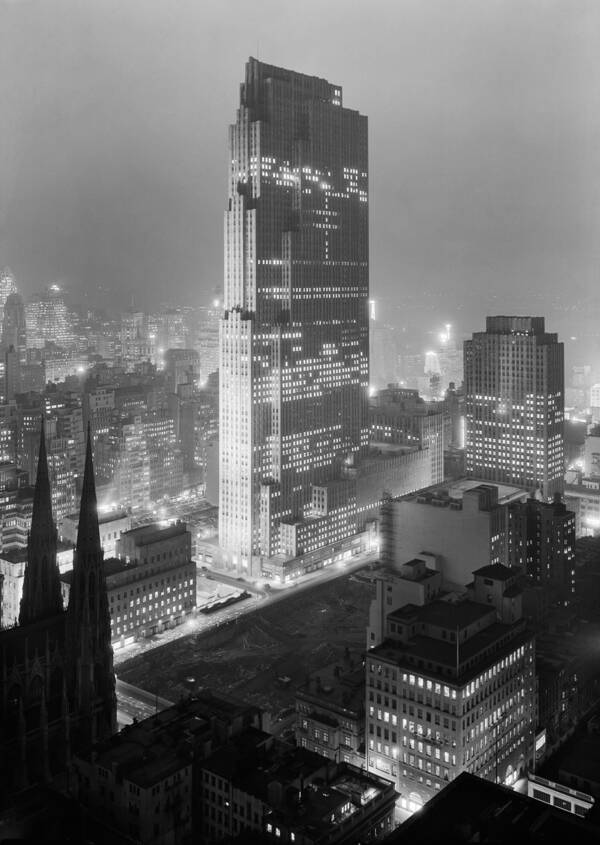 Wikimedia CommonsNight view of Rockefeller Center during its construction.

While the photograph remains somewhat of a mystery, its enduring significance has taken on a life of its own, spawning countless recreations and ultimately offers us a snapshot into an important time in New York City’s past when it was just becoming the behemoth it is today.

“We mostly hear about the famous architects and financiers, but this one iconic photograph shows the spirit of how Rockefeller Center was built — the fulfillment of the promise of Manhattan,” said Mystelle Brabbee, the senior programmer of the DOC NY film festival where Men At Lunch was screened.

“Beauty, service, dignity, and humor dangling 56 stories above the midstream rush of the metropolis, all summarized in this moment.”

Next up, meet Emma Lazarus, the Jewish poet behind the Statue of Liberty’s famous inscription. Then, dive into the tragic story behind the photo of “the most beautiful suicide.”