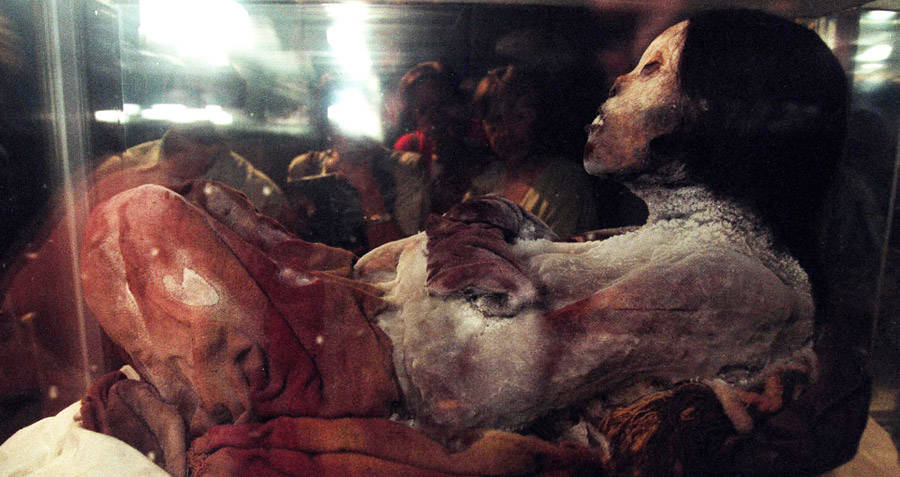 JAIME RAZURI/AFP/Getty ImagesMummy Juanita on display at the Museum of the Nation in Lima, Peru. March 1999.

The must-see attraction for visitors to Museo Santuarios Andinos (Museum of Andean Sanctuaries) in Arequipa, Peru is without a doubt the Mummy Juanita, one of the world’s best-preserved corpses.

Her full head of dark hair is still intact and the skin on her hands and arms, discoloration aside, shows almost no decay. The mummy’s discoverer, Johan Reinhard, even made note of just how perfectly the mummy’s skin had been preserved, “down to visible hairs.”

As peaceful as she looks — a far cry from some of the more ghastly mummies that researchers have discovered — Juanita’s life was a short one that ended with her being sacrificed to the Inca gods.

Scientists estimate that Juanita was between 12 and 15 years old when she died as part of capacocha, a sacrificial rite among the Inca that involved the deaths of children.

Translated as “royal obligation,” capacocha was the Inca’s attempt at ensuring that the best and healthiest among them were sacrificed to appease the gods, often as a way to stop a natural disaster or ensure a healthy harvest. Considering that Juanita’s body was discovered atop Ampato, a volcano in the Andes, her sacrifice very likely played into the Inca’s mountain worship.

Juanita’s life prior to her selection for human sacrifice probably wasn’t all that unusual. Her days leading up to her death, however, were very different than the lifestyle of a typical Inca girl. Scientists were able to use DNA from Juanita’s well-preserved hair to create a timeline of those days and deduce what her diet was like before capacocha.

Markers in her hair indicate that she was selected for sacrifice about a year before her actual death and switched from a standard Inca diet of potatoes and vegetables to the more elite foods of animal protein and maze, along with large quantities of coca and alcohol.

As Andrew Wilson, a forensic and archaeological expert, explained to National Geographic, the final six to eight weeks of life for Inca child sacrifices was one of a very intoxicated psychological state altered by the chemical reaction of coca and chicha alcohol.

Thus archeologists believe that upon Juanita’s death, she was likely in a very docile and relaxed state. While the Incas would eventually perfect this drug mixture — which, coupled with the mountainous high altitudes, would cause the child sacrifices to fall into a permanent sleep — Juanita wasn’t so lucky.

Radiologist Elliot Fishman would discover that Juanita’s death was brought about by a massive hemorrhage from a club blow to the head. Fishman concluded that her injuries were “typical of someone who has been hit by a baseball bat.” After the death blow, her skull swelled with blood, pushing her brain to the side. Had blunt trauma to the head not occurred, her brain would have dried symmetrically in the center of her skull.

After her death, sometime between 1450 and 1480, Juanita would sit alone in the mountains until she was uncovered in September 1995 by anthropologist Johan Reinhard and his Peruvian climbing partner, Miguel Zárate.

If it weren’t for volcanic activity, it’s possible that the mummified young girl would have continued to sit in on the frozen mountain top for centuries to come. But because of the volcanic activity warming the snow though, Mt. Ampato’s snowcap began to melt, pushing the wrapped mummy and her burial site down the mountain.

Reinhard and Zárate discovered the small bundled mummy inside a crater on the mountain, along with numerous burial items including pottery, shells, and small figurines.

The thin, cold air 20,000-feet up near the summit of Mt. Ampato had left the mummy incredibly intact. “The doctors have been shaking their heads and saying [the mummies] sure don’t look 500 years old [but] could have died a few weeks ago,” Reinhard recalled in a 1999 interview.

The discovery of such a well-preserved mummy instantly created a surge of interest throughout the scientific community. Reinhard would return to the mountain top a month later with a full team and find two more mummified children, this time a boy and girl.

Reports from a Spanish soldier who witnessed sacrifices of children in pairs suggest that the boy and girl might have been buried as “companion sacrifices” for Mummy Juanita.

All in all, experts estimate that there may be hundreds of Inca children mummified in the mountain peaks of the Andes still waiting to be discovered.

Next, read up on Xin Zhui, a.k.a. Lady Dai, another of the world’s best-preserved mummies. Then, check out the strange “mummy unwrappng parties” of Victorian England.